Drawing down our most potent muse, the magical child 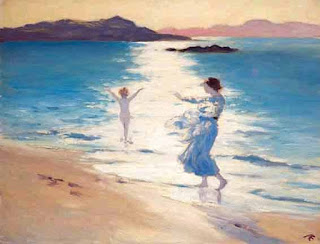 “The creative mind plays with the objects it loves,” said Carl Jung. An earnest man at one of my lectures once asked me to summarize what I consider essential practice. I said, “Remember to play.” He carefully wrote down those three words as if he was marking a schedule. I don't think he quite got the message.
The child inside him — and in each of us — knows. Like puppies or lion cubs or dolphins spinning silver lariats of bubbles, children play for the joy of playing. Young children are masters of imagination, since they know the magic of making things up. Our first and best teacher of conscious living is our inner child.
But that inner child may have gone into hiding, under a glass dome or in a room in Grandma’s house, because of shame or abuse, ridicule or loneliness, because the world wasn’t safe or it wasn’t fun. If we have lost our dreams, if our imaginations are stuck in a groove, it’s because we have lost our inner child. To live as active dreamers in everyday life, we have to bring that child home. This requires a quest, a negotiation, and fulfillment of a promise.
The quest will lead us down halls of memory to a place and time where our wonder-child went missing. We can embark on the quest as a journey to a real place in the imaginal realm. Sometimes I ask workshop members to picture a path that winds back to the place where they can find their magical child. Maybe the path has been blocked by the rubble of adult life, by thickets of doubt. I suggest taking a broom, or a brush-hog, to clear all obstructions away..
The negotiation requires us to convince our child selves that we are safe and we are fun to be around. Fulfilling the promises we make will require us to remember to play without scheduling it.
Play first, work later, the child that is with us will insist. In the courses and playshops I lead, I often invite participants to get down on the floor and draw their dreams with crayons, and to get up and turn them into spontaneous theater and performance. Our inner children come closer when we play like this.
Play first, work later. The cautious, dutiful adult self will protest. But if we are to keep our inner child at home in our bodies and our lives, we’ll need to fulfill our promise to be fun as well as safe. If we play well enough, then before we quite know it we’ll fall in love with our work, because it will be our play.

Stephen Nachmanovitch reminds us in his book Free Play that "our inner child is our most potent muse." Here's a scene from my life as ally of this kind of muse:

In a room overlooking Spring Street in New York's colorful SoHo district, I am drumming to help twenty-four dreamers call up the right dream to play with — or play with them — on a wintry Saturday morning. Everyone has sketch paper and crayons, because the first thing we'll do is to turn the dream that comes up into an instant drawing. Adult kindergarten is great. It brings out the child in each of us who is a natural creator.
At the end of the drumming, I rough out my own picture. It shows a figure whose head and upper body are those of a giant salmon, and whose lower body is that of a woman. She is the Salmon Speaker. She has stepped through a holo-screen to lecture a council of world leaders on their responsibilities to Water, and all that lives in Water. She is a being from Dreamland, the future society of my deeper dreaming, in which dreamers speak for the planet.
Other pictures are bursting to life all around me. It's time for introductions. I ask people to introduce themselves briefly by stating their name, their intention in coming to the workshop (“Writing from Dreams”) and the title — just the title — of their dream pictures. I spin the drumstick to show us where to begin, inviting the play of coincidence. When coincidence is in play, a woman in the circle said to me earlier, “you feel the fingers of the universe are on you.”
Some of the dream titles are so juicy and inviting that I pause the introductions more than once to have people meditate on a phrase or simply write a few lines from it, jotting down the first things that it releases in their minds. One of those irresistible titles is, “The Child's Other World”.
The phrase transports all of us into places of memory and imagination, into an enchanted apple orchard or through a green door no one else can see. In the child's other world, one of our participants wrote, there is “the joy of touching, smelling, feeling, playing with, hiding in the sun-hot dark dirt between the strawberry plants of our big backyard, alone and breathing in the tangy grass.”
In that other world, one writer found herself “floating on the clouds, very light, dissolving, feeling lifted into the sky.” Another found herself stepping through a dream door, “exiting a spaceship onto a planet where it is night, there are trees and hills on the horizon but in front of me only a cleared space. To my left I can turn to a swingset, as yet motionless, and to my right is a stationary park bench. Everything is blue, including the light.”
In the child's other world, one woman played  “imaginary chess in the park”. Another found the other world of children “is seen through the kaleidoscope of their eyes. The patterns and colors transfix them to the magical possibilities of the coming day. Flights of fancy, rainbows and dreamscapes interweave seamlessly into the sidewalks, trees and buildings around them.”
For me, the Child’s Other World is a world within this one. Its cloudy skies are the sheets I have pulled over my head as I lie in bed, aged nine or so. Grown-ups can't understand that the world inside the sheets is bigger than the one outside.