What Face Will Your Death Wear? 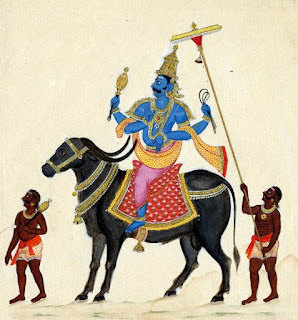 Death wears many masks. In Hopi mythology, the god Masau’u — depicted as a skeleton wearing a mask — is the gatekeeper and mediator between the realms of the dead and the living. In the Hopi creation story, when the ancestors journey up from the underworld to inhabit the earth, it is Masau’u who welcomes them into the sunlit world. He is a friend and guide to humans and knows the ways between the worlds; he is also the lord of boundaries, fire, fertility — and humor. He can turn anything into its opposite.
The ancient Greeks had two names for their death lord. They called him Hades, which means “the unseen,” and Pluto, which means “rich.” The words hint at the treasures to be found in his realm. The Greek myths also warn of the need to travel these roads with great care, to avoid the fate of the hero Theseus, who lost a part of himself when it remained stuck to a bench before the throne of Hades — and of his friend Pirithous, who remained stuck there indefinitely.
The close encounter with Death brings courage, which Rollo May rightly identified in The Courage to Create as the heart of the creative endeavor. It encourages the ability to go beyond the surface vicissitudes of daily life. It brings keen awareness of a larger reality. This is clearly reflected in the experiences of survivors of near-death experiences. Kenneth Ring, one of the foremost researchers in this field, reported in Life at Death that 60 percent of all “returners” questioned by him said that their lives had changed; 40 percent said this had been the most important experience of their lives; 89 percent said they would gladly repeat it.
All dreaming peoples know that the encounter does not require the physical extremity of a life-threatening illness or near-fatal accident. We move among the departed in spontaneous sleep dreams. As active dreamers, we can range far and wide through the afterworlds, observing how different aspects of the soul go to different destinations. In the process, we learn to brave our deepest fears. We encounter radiant guides and powerful spiritual allies. We discover special places to which we can return — in this life and perhaps beyond.
I sometimes journey to a pleasant campuslike setting I first visited in a sleep dream more than ten years ago. It is a place of higher education for people who no longer have physical bodies. In my original dream, I found the “freshmen” gathered for commencement. They were mostly elderly, the women in cute white dresses with ribbons and bows. The choir sang hauntingly beautiful songs that celebrated the link between dreaming and the entry into a larger reality:

The soaring beauty of their voices is with me as I write. Occasionally, in journeys to help the departed, I have tried to guide those who seem ready for those halls of weathered, ivy-draped stone, set among rolling lawns and exuberant flower beds and sparkling fountains.
When my spirit needs to soar, I sometimes ascend, in conscious dream journeys, to a world as fresh as the first day where I flew with the winged powers after leaving my astral body, as well as my physical body, behind.
And when I most need clarity, I check in with my personal Death. He/she has worn many masks. When I was a teenager in Australia, she came swirling through my dreams and reveries in the terrible shapes of Kali. At the back of the history class on airless afternoons, I wrote a cycle of poems in her honor:

In the darkness, a dark woman came to me
Softly as the ticking of a clock

I have seen death swinging a Scottish broadsword. I have conversed with Yama, the Hindu death lord, who speaks - in beneficent mode - in the accent of an Oxbridge-educated maharajah. I have seen death as a great black bird, as a purple bruise flowering in an empty sky, as a sweet and luminous friend.
The Death I want now (to echo a splendid line of Octavio Paz) carries my name, wears my face.

- adapted from Dreamgates: Exploring the Worlds of Soul, Imagination and Life Beyond Death by Robert Moss. Published by New World Library.

Graphic: Yama, who is also called Kala ("Time") and may be the twin and/or consort of Kali, riding the water buffalo, with his mace and the noose he uses to pluck souls out of bodies in his hands. This is one of his more benign images.
Posted by Robert Moss at 2:18 PM

When I was 20 i decided that i had enough of this planet and was dog on leaving my body when i went to sleep. That night. I had a white light flying to me from the distance and getting bigger kind of like a ufo. As i approached the white light fear gripped me and i said to myself "i am not ready yet". I woke up in paralyzation. I couldn't move. And my whole body was vibrating with energy through and through. I just told myself to close my eyes go to sleep and everything will be alright the next day.

Although i must say i have come along way since then. I am of the age 27. At the age of 23. Three years later i decided i was going to give a middle finger to this whole creative act and just work out build myself a nice body. Get tattoos. Get a car. Go an adventure from new york city too the canyan. Meet people hear there intresting stories. Make love to a beautiful woman. And then blow my brains out. And then i started to think about this beautiful woman. And i had my first tantric experience and that same energy i felt in the dream through and through my body. And then since then i have had all kinds of biological stuff happen. Inside and out. I dont know if i should write this. I like to share it. But it might be dangerous stuff. Not many can ride how i ride.