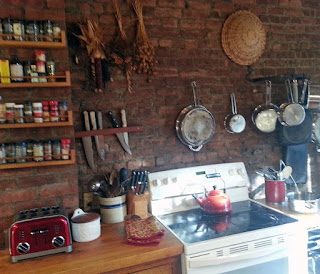 In my night dreams, the place of creation is often a kitchen. I don’t do a lot of cooking, but I love the image of the kitchen — where we are fed and nourished and we mix things together and cook things up — as the creative center.
I especially like to think of the creative process as being similar to baking. You get together your startup dough, then you knead it — you stretch it and pull it apart and bring it together again. Then you stand back and let it rise (if it will). Then you get hot, and expose your project to the fire. And finally comes the test: how does it taste?
I know, from the state of my dream kitchen, how a creative project is coming (or not coming) along. Once, when working on a book, I dreamed that a splendid meal was being delivered, but that there was no place in the kitchen to set it down, since every surface was covered with papers or dishes. The dream gave me a clear message to eliminate clutter, push aside old drafts and research files, and make space for the main dish to be served up fresh and hot.
The state of the dream kitchen may reflect the family situation. A woman once came to me with a troubling dream in which her kitchen was so messy that she could not tell the difference between the groceries and the trash. She insisted that she was a tidy person who would never allow her kitchen to get into that state. Could the dream be played out in the future? She was reluctant to accept that idea. We briefly discussed whether the mess in the kitchen could be a metaphor for the state of her marriage and family relations. She allowed that there might be some "cleaning up" to do on that front. Two weeks later, she came home to find that the mess from her dream had spilled over into her literal kitchen. Her husband and teen boys had done such a number on the kitchen that she literally could not tell the difference between the groceries and the trash. This prompted her to have a tough sit-down conversation with her husband, at the end of which they agreed that the mess in their relationship couldn't be cleaned up by anything less than a separation.
In that kitchen dream, be it noted, we see how a quite literal precognitive dream can point us to a situation in ordinary life that is richly symbolic. We need to take dreams more literally, and waking life more symbolically.
What's going on in your dream kitchen?

I dreamt recently that in my real kitchen there is a small but very deep hole in the floor just under the window. It is a bit like a pipe from the canalization system. There is lots of water on the floor. I am leaning over the hole trying to remove the excess of the water from the kitchen with my right palm. It is a very slow and precise proccess.