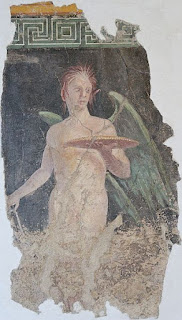 What a deliciously good book is Elizabeth Gilbert's Big Magic. Her insistence that ideas are out there looking for the right people to carry and create with them matches the ancient wisdom of Aborigines that the Big stories are hunting the people who will tell them. I love her account of how, when she put aside the idea for a Brazilian "jungle book", it jumped, with specific characters and plot themes, to another wonderful writer, the novelist Ann Patchett, who brought it through in State of Wonder.
I especially like her recognition that genius is not something a person is, but a greater creative spirit who will infuse and inspire us when we are available. That is the whole theme of the last chapter of my own ConsciousDreaming, and to operate with this awareness is to enter the heart of creative action. We miss the real meaning of genius. The Romans never said that a person was a genius. They said that a person had a genius, a tutelary spirit that brought them greater creative gifts. The Latin word "genius" is related to gignere, which means to engender or "beget". It implies reproductive energy, the power of inseminating new life. The Romans believed that a person's genius rejoices in good living, in laughter, in healthy sex, in having fun. Forget to play, and you are not working with your genius, for whom play is the only thing in mortal affairs worth taking seriously.
Gilbert reminds us that for the Greeks the highest state of bliss is eudaimonia, being “good-daemoned”.
Later she makes practical use of Einstein’s practice of “combinatory play”. To release your best in your primary field, play around in a lesser (for you) field where consequences are unimportant. On is way to a discovery, Einstein would pick up his violin and play a sonata or two.
When it comes to negative thoughts, Gilbert recommends, act like a hostage negotiator. “Speak to your darkest and most negative interior voices the way a hostage negotiator speaks to a violent psychopath: calmly, but firmly. Most of all, never back down…The life you are negotiating to save, after all, is your own.”
She borrows wonderful advice from W.C. Fields: “It ain’t what you’re called, it’s what you answer to.”
She invites us to choose the trickster in each of us over the martyr.
And then there is her story of the poet Ruth Stone, who wrote

Poems came to me
As if from far away.
I would feel them coming,
I would rush into the house,
Looking for paper and pencil.
It had to be quick,
For they passed through me
And were gone forever.

- Ruth Stone, "Fragrance",in her last collection What Love Comes To

As a poet myself, I feel for Ruth Stone, because thanks to Elizabeth Gilbert, Stone's mode of chasing poems like runaway horses is now famous, but few have read the poet herself or even remember her name. It's well worth seeking out her work and noticing, along the way, how she rose above a dark river of grief and pain, especially after her second husband (also a poet) hanged himself from a door in the family home.
There are delicious further revelations in Gilbert's account of how Stone caught her poems. When a poem got away from her, she felt it galloping away, "searching for another poet". Then sometimes she would manage to grab an escaping poem by the tail, and would feel herself pulling it back. "In these instances, the poem would appear on the page from the last word to the first - backward, but otherwise intact."
Many of us dreamers know exactly how that works, as we pull back dreams by the tail as they run away. How many of the dreams that escape go searching for another dreamer? 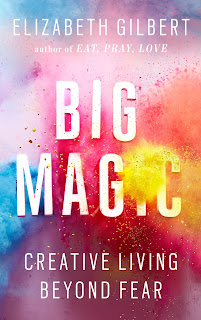 Elizabeth Gilbert´s suggestion on how to handle negative thoughts revived the dream image I had the other day. I was looking at a lovely flower in a flowerpot and listened to my friend criticizing something which didn´t seem to me so bad. Initially, the flower was in the full blossom but as my friend continued with her negative narrative, the plant lost its radiance and vitality and at the end it looked withered and dead. To try to balance my friend´s momentary negativity I carefully said: There could be also other, more positive view. To my surprise, the flower instantly returned to life and its previous beauty.
I guess it´s a nice example of what our excessive negativity does on energy levels. Yes, it doesn´t kill us literally, but it drains and spoils the play. Maybe if we were able to notice what´s happening in us before we start complaining inside or outside, many useless conflicts would never come into being.
Thank you for interesting and inspiring posts.