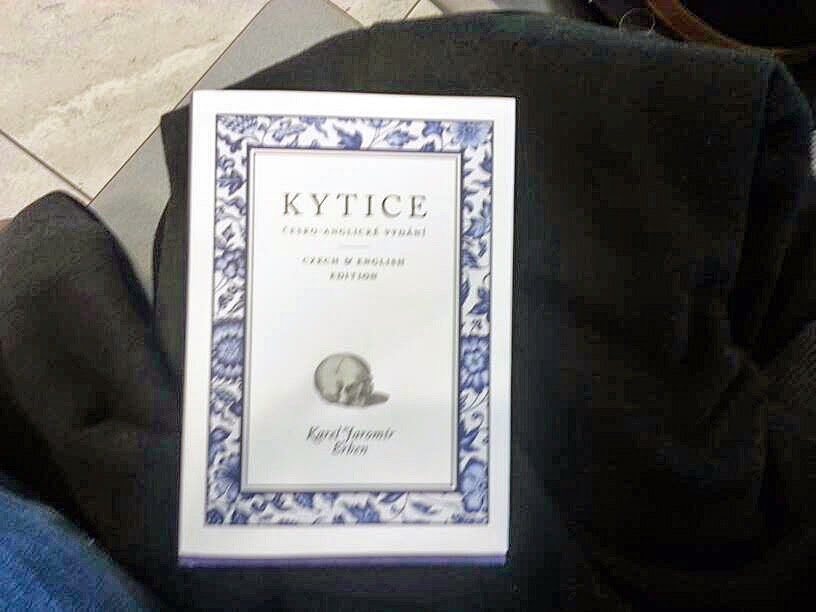 Memo to self: consider your selection of in-flight reading very carefully, especially when it involves fantastic or darkly comic tales from Eastern Europe. You may find you are scripting corresponding travel experiences. This happened to me again last night, towards the end of a long trip home from two weeks of teaching in the Czech Republic and Estonia.
At a news stand at Prague's Vaclav Havel airport, I was surprised and delighted to find a bilingual edition of the folktales of Karel Jaromir Erben. The title, Kytice, can be rendered as "Bouquet" or "Posy" in English. Erben's stories, written in verse, have held a special place in the Czech imagination since first publication in 1853, influencing Dvořák  and many other creative minds, but have been largely unavailable in English until now.The new edition, with translations by Susan Reynolds, had only just been published. I snatched it up with excitement. Not only am I trying to learn more about Czech culture, but reading bilingual editions of poetry is one of my favorite ways of studying a new language.
I found myself embarked, in Erben's pages, on a strange and dark journey as I flew to Frankfurt and then, on another plane, to Newark airport.The atmosphere was deepened by the oddly compelling rhythms of Erben's verse, with its sorcerous repetitions.

Glow, moon, glow,
That my thread may sow

There's a story in this little sequence, which is so often the gift of misadventures in travel. There is a delicious phrase in Czech that applies, since the story begins with reading poetry. "That touches my poetic intestine (básnické střevo)." I hope to retrieve my suitcase today; it went on its own odyssey, without me. I will continue to reflect on the possible influence of where in-flight reading can take me.
A couple of years ago, I boarded a plane in Bucharest, bound for Warsaw, with Mircea Eliade's novelette  "With the Gypsy Girls" (LaȚigănci) as my flight companion. In Eliade's story, a man is drawn into a house of gypsies and never manages to return to ordinary reality. A bizarre series of flight cancellations and delays and missed communications followed, leaving me stranded overnight at Warsaw's Chopin airport, surrounded by the sprawled bodies of East Europeans without Schengen visas, draped over airport seats and even the display platforms for automobiles, like the victims of a mass disaster. On that strange night I wondered if I had been transported into one of Eliade's alternate realities.
I love new stories, but I confess that there are days - especially when 20 hours of travel is required - where I can probably live without a fresh one. However, my adventures with Czech literary companions are not over. I am planning to travel next time with Bohumil Hrabal. The film version of Postřižiny, his fictional memoir of growing up in a brewery town had me laughing till it hurt.

Hi Robert, thanks for the lovely story. Don't get me wrong, but your Czech reading Odyssey from Svejk through Kytice to Postriziny is a wild card ;-) we Czechs are more than a bit weird and that includes our humor which is a shade of black. I look forward to you finding out the meaning of Pábení and Pábitelé when you enter the bitter-sweet world of Hrabal's novels. Anyways, I really appreciate your efforts to catch "básnické střevo" and tune into the culture you are about to meet! ;-)

Děkuji, Jana. Yes, you are quite right - moving from Kytice to Hrabal is not such a safe trip. I look forward to learning more of the wandering ways of the pábitelé, a word for which we do not (yet) have a satisfactory translation in English. In view of my odyssey on unexpected trains, it is interesting to note that the first Hrabal book (among those I ordered while in Bohemia) to arrive at my home is "Closely Observed Trains".

This is hilarious~~I am so glad to read this~~it is good to know that this stuff happens to other people!! And it is so nice to have a sense of humor about it, thanks for the reminder~~

That must have been an exhausting day for you, Robert. Every time I read one of your chaotic traveling stories, it reminds me of the movie: Planes, Trains & Automobiles. A great movie.

When I see this movie I always think, thanks God this can't happen in real life. But apparently it can.
I hope you will be spared from this kind of chaotic traveling in the future. Maybe you should have asked the heirs of the meadows if they wanted to bring you home ;-)