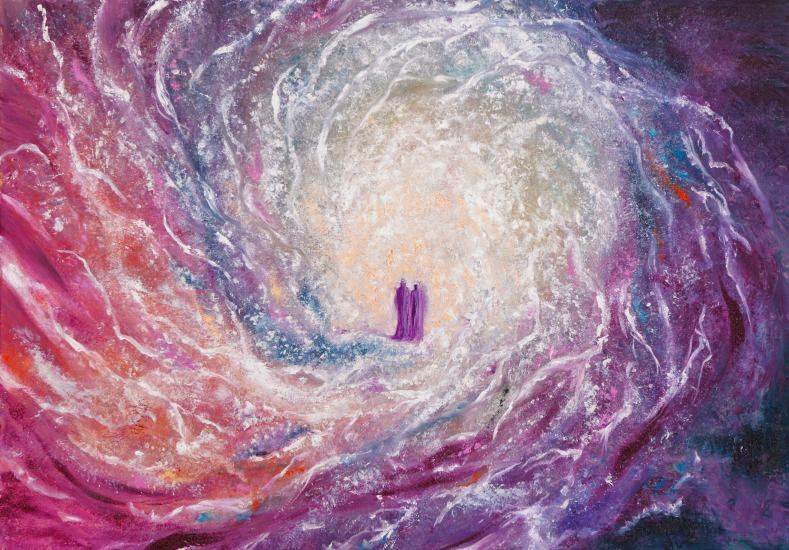 I was met at Tallinn airport by a delightful five-year-old named Sophia whose mother told me that they go flying in dreams together. Then I found my hotel lobby filled with wonderful paintings by Estonian artist Reet Kalamees, whose exhibition has the theme "Flying in Dreams and Awake". This seemed like a very clear wing-brush from the universe.
When I made contact with Reet, she told me that the exhibition was supposed to end before my workshop but was unexpectedly extended for a week-  so these magical pictures were there to inspire our frequent flyers during my weekend workshop - and that  she herself was coming to the workshop.
The night before I opened the program, I wondered how and where I might go flying from my bed in a a hotel beside the Old Town Harbor. As I started drifting towards sleep, I realized I had taken to the air without noticing the transition. I was not flying in one of my usual modes, in some simulacrum of my regular body, swimming through the air or shooting off Superman-style, or on the wings of a bird, or traveling as a disembodied thought-form. Nor was I  in a plane, a spaceship or vimana.
I was seated in a boat, a solid wooden boat of very old design. Seated in front of me were three figures wearing simple earth-colored, hooded garments. They were doing the work of navigating and making the vessel fly through the air. I could see the landscape of islands and forests quite clearly below us. I thought we must be sailing over Saaremaa and some of the smaller Estonian islands in the Baltic sea. We were close enough to the ground for me to see the excited faces of people who were turning from their usual occupations to snatch up gifts we were dropping to them from the flying boat. They were very happy for the gifts but appeared to be unable to see where they were coming from.
At this point, I heard a voice say to me, "You have the support of the Heirs of Ars." I was not quite sure how to spell the last word.
When I surfaced from this dream, in high excitement, I wondered if I had been drawn into a scene out of Estonian mythology and perhaps even into direct contact with ancient spirits of the land. This has happened to me often in my travels, and has inspired many ventures in dream archaeology, as described in The Boy Who Died and Came Back.
What was the flying boat? Who were my companions? I thought of the spirit canoes of the Pacific Northwest, and wondered if there was a Baltic equivalent. Who were the Heirs of Ars? Had I gotten the last word right? It sounded like Ars, which is Latin for "art", but perhaps the spelling was different.
When I met my Estonian translators, Robert and Piret, on Saturday morning, my first question was whether the word "Ars" has meaning in the Estonian language. "Aas - that is A-A-S," Robert corrected my spelling, "means Meadow or  Clearing."  Piret added, "If you are supported by the Heirs of Aas," it could mean that you have been welcomed by the fairies and the spirits of the land."
After a wonderful morning of dreamplay, I lunched with Reet Kalamees, the painter of flying dreams, and we talked about different modes of dream flight. "With me, it is mostly will," Reet explained. "I feel myself pumping up, expanding my energy, and then I go straight up. I dream I am teaching these techniques to others." She told me that now that she met me she was sure that one of the paintings she had on display - of a blue man with angel wings - had been inspired by a dream encounter with me months before.

I start my Sunday in Tallinn by playing the quick bibliomancy game I have recommended to my workshop group. I open a book at random and find myself looking at a section title that reads "Leaning to Trust Inner Voices."
At the breakfast buffet, I am joined by a woman from my group. Her name is Helle. I ask what it means in Estonian. It means "Voices."
Helle says to me, before we have finished our first cups of coffee, "I want to ask you about whether we can trust inner voices in our dreams." She proceeds to give me an example of that deep inner voice that we learn to rely on. She was told, "Don't think you can heal people who are not ready to accept healing."  We agree that this is simple, and very practical, wisdom.
I talk about my own experiences with inner voices, and how we learn to practice discernment by trusting our feelings and seeing whether inner counsel and messaging proves to be reliable and helpful in our lives. I recall one of the most important messages I ever received from an inner voice was this: "Robert remember this world is not your prison. It is your playground." Wonderful counsel, especially on bleak and dreary days.
We discuss ancestral voices. Wherever I go, I seem to hear voices from the land, speaking in the local language. When I pick up words, phrases and symbols in a language I do not know, this gives me great research assignments. When I am able to find a translation and a context for these words and symbols - taking me far beyond what I previously knew - this confirms for me that I am authentic contact with the local spirits.
I recall the inner voice that told me the previous night, that the Heirs of Aas support me Then I remember that I still have to research the spirit boat I was riding in, above the earth, when I heard those words. I ask Helle if there is a tradition of spirit boats in this part of the world, perhaps analogous to the spirit canoes of the Pacific Northwest. She amazes and delights me when she tells me that she has seen Estonian shamans seated in a small wooden boat, drumming together for a group journey. 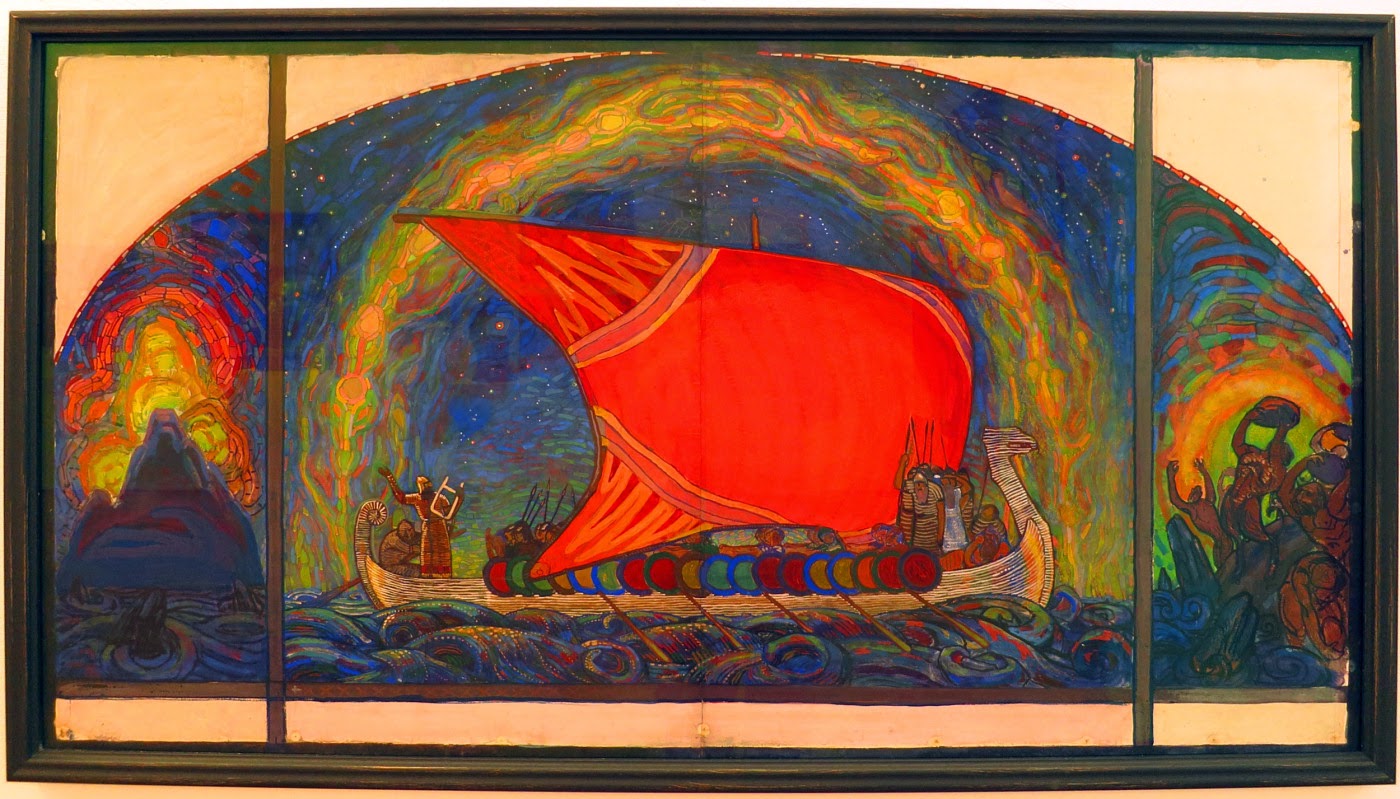 I can't resist sharing this sequence with the whole workshop group - over 120 people - when we start the Sunday session. More than a dozen excited Estonians proceeded to share their knowledge of Baltic and Northern traditions of spirit boats. One had trained with a Sami (Lapland) shaman who had people sit together, as if in a boat, for healing journeys and rituals. Another made the connection with Viking ship burials. Several people mentioned the remarkable boat of Kalevipoeg, the legendary giant who is the culture hero of the Estonian national epic. He had a magical boat, called Lennuk, which could sail through the air as well as on water. The modern Estonian translation of "Lennuk" is "plane", as in airplane. In our morning quick dream-into-art exercise, one of our Estonian dreamers had actually made a colored drawing of a boat of this kind before she heard my story.
I am discovering again that the best entry ticket to an ancient tradition is the right dream, and that when you carry such a dream, synchronicity multiplies around you in magical ways. 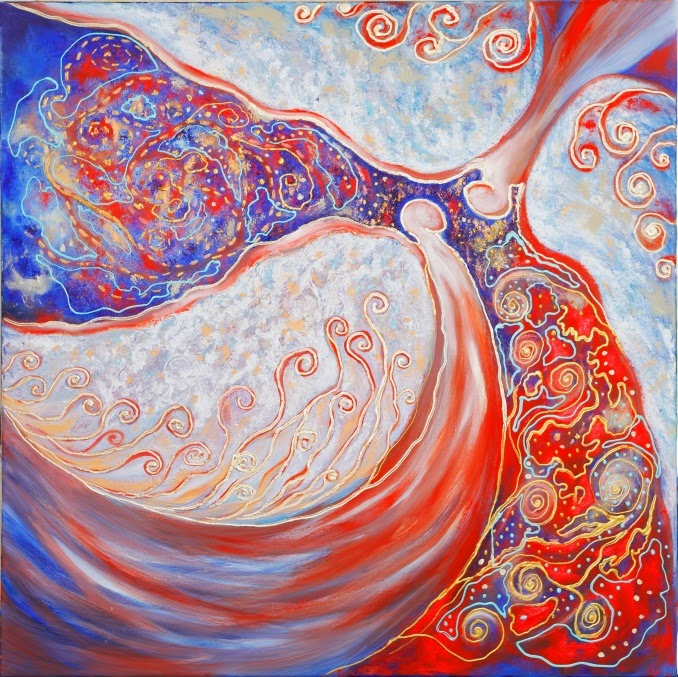 in 1946 i was stationed on a very small island called Shemta, it was near Attu. we had an aircraft, that was a sea plane and under its belly was a life boat, it had a reddish orange tail. it was used to save pilots that crashed at sea