Elemental divination with the Odyssey 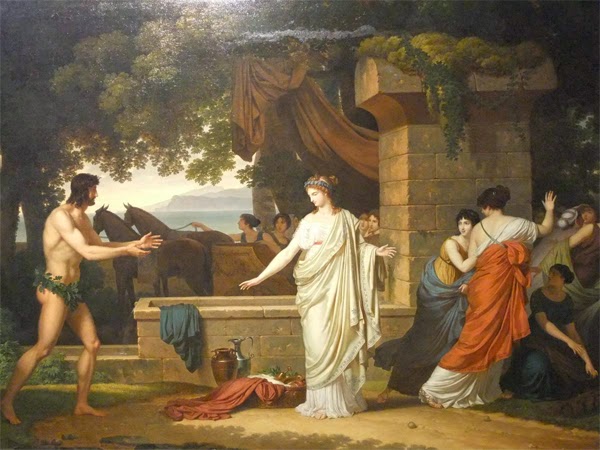 ..So the man prayed
and the god stemmed the current, held his surge at once
and smoothing out the swells before Odysseus now,
drew him safe to shore at the river's mouth.

This was the result of my morning stoicheomancy.
The term combines the Greek words Greek stoikheion, "element", and manteia, prophecy. Ancient Greeks used this term for a very special branch of bibliomancy or book-dipping: consultation of the works of Homer, considered "elemental" among literature. You open the Iliad or the Odyssey anywhere, and read aloud the first lines that you see. As I opened the Odyssey today, my left thumb fell on the lines I quoted.
I felt a warm shiver as I recognized the blessing. After all his misadventures, shipwrecked Odysseus has been washed up safe on the shore of Phaecia, the land of a people of dreams. Princess Nausicaa, alerted by a dream in which the goddess Athena speaks to her in the guise of a girlfriend, will meet the naked stranger and give him safe haven.

Tarot - philosophical and symbolic theory , which was based on 78 illustration przedstawających moments in the life of man , depicted on the cards called tarot , forming a deck of cards from which predicts the future. Your Purpose believes, however, that the Tarot is a derivative of the medieval paintings , which shows the religious holidays . We also believe that the so-called . art of memory, focusing on meditation on the icons of religious - philosophical . She also may have contributed to the creation of the Great Arkan Tarot.twojeprzeznaczenie.com.pl/tarot.html