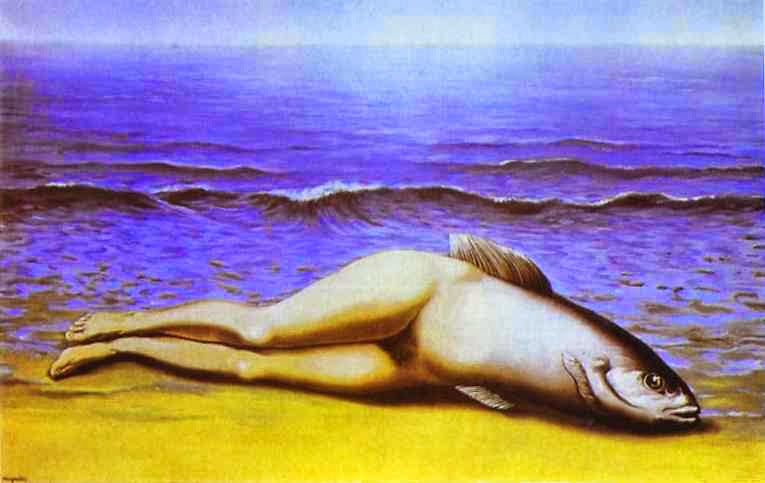 The magnetic power of a symbol, in our lives, can bring together inner and outer events in ways that shift our perception of reality. We learn best about these things through direct experience, and through stories - like Jung's fish tales - that we can trust.
When Jung was immersed in his study of the symbolism of the fish in Christianity, alchemy and world mythology, the theme started leaping at him in everyday life. On April 1, 1949, he made some notes about an ancient inscription describing a man whose bottom half was a fish. At lunch that day, he was served fish. In the conversation, there was talk of the custom of making an "April fish" - a European term for "April fool" - of someone.
In the afternoon, a former patient of Jung's, whom he had not seen for months, arrived at his house and displayed him some "impressive" pictures of fish. That evening, Jung was shown embroidery that featured fishy sea monsters. The next day, another former patient he had not seen in a decade recounted a dream in which a large fish swam towards her.
Several months later, mulling over this sequence as an example of the phenomenon he dubbed synchronicity, Jung walked by the lake near his house, returning to the same spot several times. The last time he repeated this loop, he found a fish a foot long lying on top of the sea-wall. Jung had seen no one else on the lake shore that morning. While the fish might have been dropped by a bird, its appearance seemed to him quite magical, part of a "run of chance" in which more than "chance" seemed to be at play. [1]
If we're keeping count (as Jung did) this sequence includes six discrete instances of meaningful coincidence, five of them bobbing up, like koi in a pond, within 24 hours, and all reflecting Jung's preoccupation with the symbolism of the fish. Such unlikely riffs of coincidence prompted Jung to ask whether it is possible that the physical world mirrors psychic processes "as continuously as the psyche perceives the physical world."
In her discussion of how inner and outer events can mirror each other, Jungian analyst Marie-Louise von Franz suggested that "if the psychic mirrorings of the material world - in short, the natural sciences - really constitute valid statements about matter, then the reverse mirror-relation would also have to be valid. This would mean that material events in the external world would have to be regarded as statements about conditions in the objective psyche." [2]
Some of the greatest minds of the past century - Jung and Wolfgang Pauli and David Bohm - sought to model a universe in which mind and matter, subject and object, inner and outer, are everywhere interweaving. Events, both physical and psychic, unfold from a unified field, the unus mundus of the alchemists, that may be synonymous with Bohm's "implicate order", Their interaction escapes our ordinary perception of causation and of time and space. “Precisely because the psychic and the physical are mutually dependent...they may be identical somewhere beyond our present experience.” [3]
Living symbols deeply ingrained in the imaginal history of humankind are charged with magnetic force, which can draw clusters of events together. For those familiar with tarot, it feels at such moments as if one of the Greater Trumps is at play in the world. Traditional diviners understand this, as do true priests and priestesses. Thus one of the Odu, or patterns, of Ifa, the oracle of the Yoruba, is held to bring the fierce orisha Ogun into the space, while another is believed to carry spirits of the dead into the realm of the living. When that happens, you don't just study the pattern; you move to accommodate or propitiate the power that is manifesting.
To grasp the full power of a symbol, we need to go back to the root meaning of the word. "Symbol" is derived from the Greek σύμβολον (sýmbolon) which combines συν- (syn-) meaning "together" and βολή (bolē) a "throw" or a "cast" A symbol is that which is "thrown together" or "cast together". This is very close to the root meaning of "coincidence". In Latin, to coincide is to "fall together". So it's not surprising that when symbols are in play, coincidence multiplies.
The first literary mention of a symbol is in the Homeric Hymn to Hermes, in which the god Hermes exclaims, on finding a tortoise, "O what a happy symbol for me", before turning the tortoise shell into a lyre. In the ancient world, sýmbolon came to mean a token, that which brings things together. Thus a symbol might be a pair of tokens that could be fitted together to make a single object. Such tokens might be broken halves of potsherd, a ring or a seal. They would vouch for the truthfulness of a messenger, or an enduring loyalty.
-  Jung noted in his foreword to his most important work on synchronicity that "my researches into the history of symbols. and of the fish symbol in particular, brought the problem [of explaining synchronicity] ever closer to me" [4] His experiences of symbols irrupting into the physical world led him to sympathize with Goethe's magical view that "We all have certain electric and magnetic powers within us and ourselves exercise an attractive and repelling force, according as we come into touch with something like or unlike." [5] Such powers are magnified when our minds and our environment are charged with the energy of a living symbol. 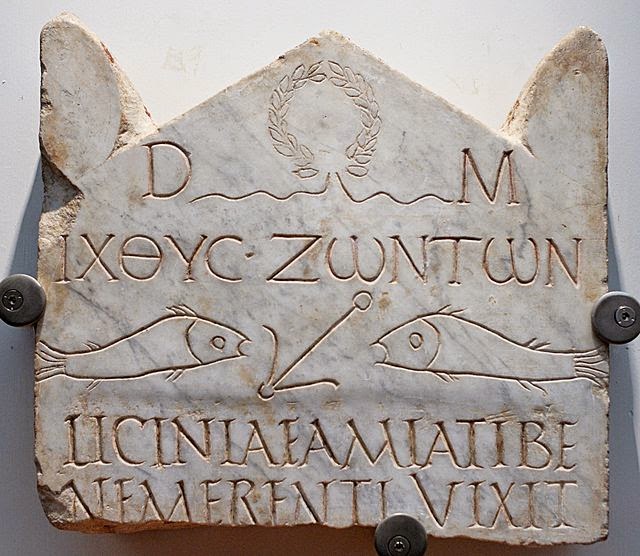 Funerary stele of  Licinia Amias, early 3rd century, with the Christian motto in Greek letters ΙΧΘΥC ΖΩΝΤΩΝ / Ikhthus zōntōn ("fish of the living") and the image of fish and an anchor

Very interesting. As at times I will have a particular dream, and in my dream some obj t will be shown to me, then a couple of days later, not thinking about it, I will suddenly come upon that same object that was shown to me in my dream.

Today I had a synchronicity experience with a group of startlings flying above me... the "blessed"me with a minor bit of pooh on my head :-) And made me aware of them, as I was far away in my mind, pondering about my in-process-of-writing-workshop about shamanistic dreaming/journeying and businessplanwriting. 2 seconds later, as the starlings flocked into the trees along the long road, there is this foot-long fish lying on the road, quite fresh, and as I was just having the synchronisitic experience, of my inner dialogue fantasy being in conversation with someone I just had spoken too about my workshop, wich has to have dancing in it too for some other synchronicity reason, which I relate to 5 rhytms dancing, which can be like humans moving through eachother blindly eyes closed harmoniously like a flock of starlings, I see the fish, and think about the man who wrote this post, and is into shamanistic workshops too... quite ;-) I remember the fish was a symbol for "the unconcious type of christianity, following dogma, and Jung's work about awareness of dreams and ourselves in the bigger context of our lives,... Might be so my workshop is here to "wake up the neighbourhood" too, in terms of conciousness... I'll ponder some more about this experience...