On the trail of a Baltic dream shaman 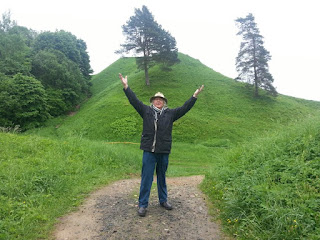 The beautiful old city of Kernave was the medieval capital of the Grand Duchy of Lithuania, and the last great fortress of the Old religion in Europe, defended by five hill forts overlooking the Neris river. It has been described as the Troy of Lithuania because so much of the past, from prehistoric times, is buried here, and rising again. Kernave was burned by the Teutonic Knights in 1390, and this savage act resulted in the preservation of layer upon layer of archaeological strata under soil and ash that became wet peat.
Myth and legend swirl around the green conical hills, the deep forest, the burial mounds and river islands. When I came to Kernave for the first time, I was shown the hill that is the reputed birthplace of Lizdeika, a great medieval shaman-priest and dream seer. Legend has it that Lizdeika was born in an eagle's nest on that hill, and could take flight in the form of an eagle.. Under cold rain, I paused to take a photograph of the shaman's hill.
Lizdeika lived close to wolves, and was reputed to be able to shapeshift into the form of a wolf. He plays a central role in the unfoldment of the most famous dream in Baltic history. Grand Duke Gediminas dreamed of an iron wolf that howled. He consulted Lizdeika - by now the krivu krivaitis, or high priest of the old religion - on the meaning of the dream. Lizdeika told the grand duke he should build a fortified city on the hill where he had been sleeping. That city is Vilnius, where you can see a statue of Gediminas' iron wolf in front of the cathedral. There is a second version of the Iron Wolf statue in Kernave.
I dreamed two years ago that I discovered a Baltic hero, a dreamer and warrior, and wove a mythic story around him. I don't know whether the dream figure was Lizdeika, but I will soon have the chance to find out. I have been invited to teach in Lithuania again in May 2013. This will be my fifth visit to the land of Marija Gimbutas, the gerat Lithuanian archaeologist of the Goddess, and of Lizdeika, the dream shaman. This time my workshop will take place in and around Kernave, and we will be able to practice dream archaeology and shamanic dreaming, and celebrate sacred rituals, at the ancient sites.

I have written about practicing dream archaeology in Lithuania in two of my books, The Dreamer's Book of the Dead and Dreaming the Soul Back Home (which will soon be published in Lithuanian).
Posted by Robert Moss at 7:21 AM