Snapshots from a Dream of Tallinn 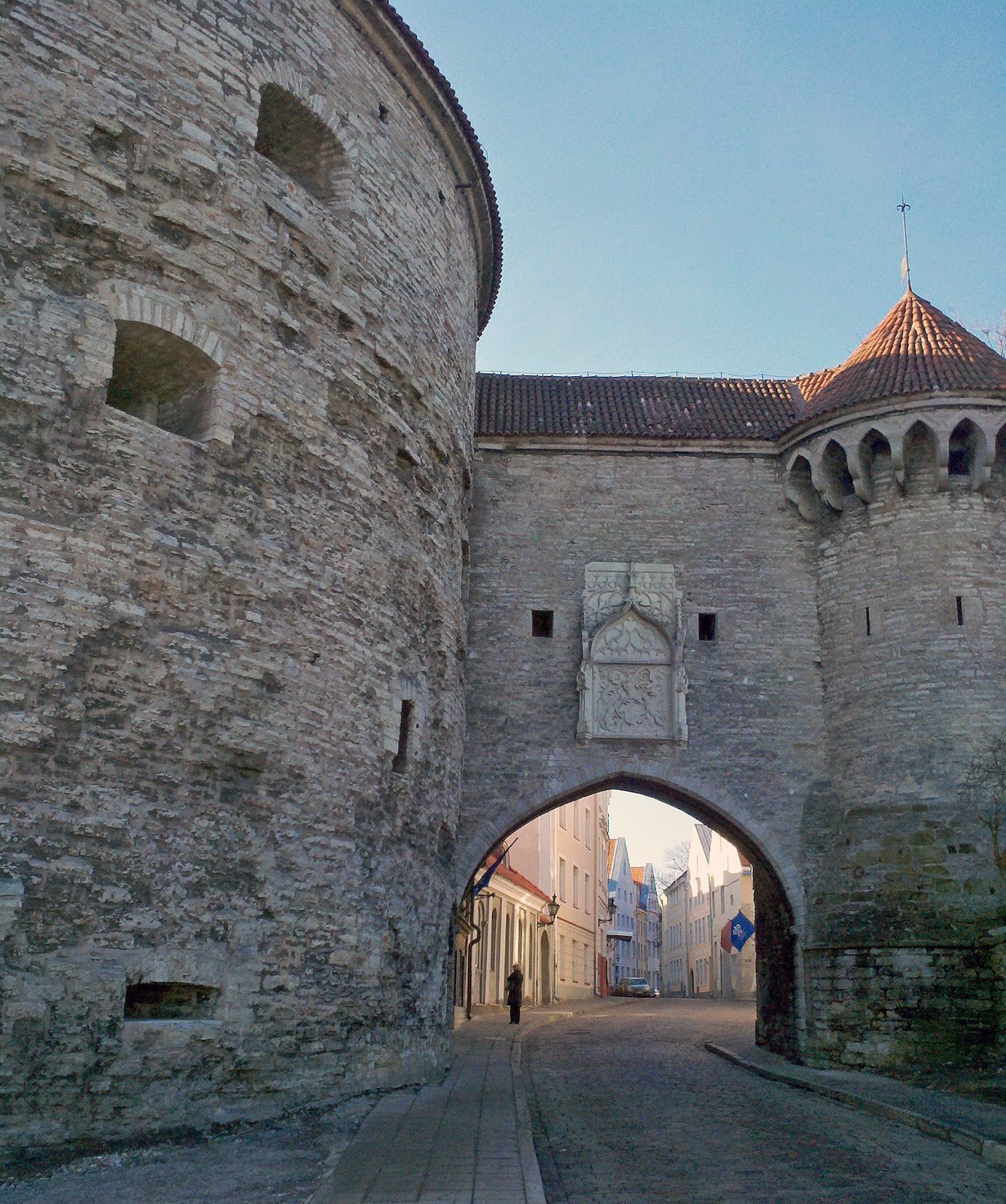 I walked past Fat Margaret, the massive medieval tower that guards the north gate of the Old City, and down Pikk Street. Just before 9 AM, it was nearly deserted; while the word "Suletud" on the doors of shops and restaurants and museum simply means "Closed" in Estonian, I was able to enjoy blissful solititude, in the more familiar sense, instead of tourist crowds .
I walked up to the pink palace that houses Estonia's parliament, then down Toompea Street to a great unhewn block of stone that has been turned into a monument. On August 20, 1991, the day of an attempted coup in Moscow, the Supreme Council of Estonia declared independence. This was one of the rocks that nonviolent independence fighters hauled to block the roads to the citadel against Soviet tanks that (for once) never came.
At the foot of the hill, I turned west to visit Freedom Square, where a man-made monument greeted me. It is a Victory Tower constructed entirely of glass, honoring Estonia's earlier struggle for independence in 1918-1920, when Estonians, supported by a British fleet and international volunteers, had to fight on two fronts - against the Red Army and against the German Iron Guard, in league with the Baltic German Landswehr. The glass tower, surmounted by the Cross of Liberty, Estonia's military medal, resembles an ice sculpture, suggesting both the difficulty of building a free society, and its fragility in a country whose geographic misfortune is to be situated in the "Bloodlands" between Germany and Russia.
I walked up the Hill of the Hartu Gates, above the glass tower. A group of Russians were rough-housing with a Samoyed. I heard angelic singing behind me, as I stood under an ancient linden, and turned to find a troop of school girls chorusing a folk song. 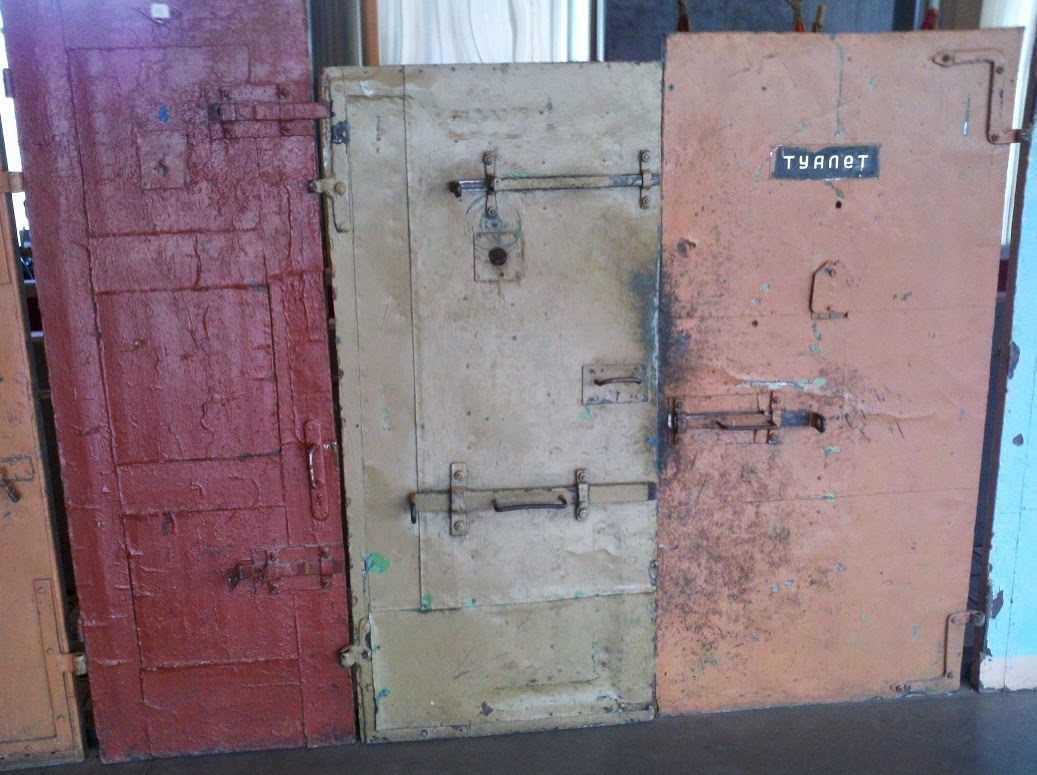 I arrived at the Museum of Occupations at opening time. This was at the top of my "must-see" list because I felt a strong need to understand the long nightmare of the 20th century from which the Estonians emerged, singing. I saw old suitcases piled everywhere, a mute tribute to all the Estonians forced to flee their homes or their country. A sinister inner gateway loomed in front of the exhibits. It looks like a cross between a tank and a border checkpoint, embellished on one side by the red star and on the other by the swastika, emblems of the twin evils that invaded and oppressed Estonia in World War II.
Beside this iron gate, the museum's statement of intent included these words:

The loss of memory and gaps in memory are dangerous for a people.

Yes. And it takes remarkable bravery to own the memories of a history in which so many were not only brutalized or murdered, but compelled to fight in the uniforms of foreign armies commanded by psychopathic despots. The exhibits are understated: a collection of every-shifting identity cards, an NKVD trroper's body armor, a bottle of homemade vodka, a photo of Forest Brethren - who took to the woods to resist the Soviets - smoking cigarettes under a tree. The testimonials of survivors, speaking in documentaries running on monitors above the display cases, are more graphic. A woman speaks of the "smell of burned meat" after the Soviets arrived to "liberate" her district.
I leave the Museum of Occupations with all the material in English I can find and walk up to Town Hall Square to drink a local beer - A. Le Coq - at a sidewalk table in the sun. Suddenly a large group at two long tables behind me burst into song, quite beautiful song. When I thank them, they tell me they are Swedes, a choir arrived for a singing competition at the Concert Hall. At my request, they proceed to sing a "summer hymn". And I wish that all international conflicts could be resolved in a singing contest.
My walk brings me back to Fat Margaret, once a prison. Now the thick-walled stone tower houses a maritime museum. I wander inside and contemplate images of Neolithic Estonians in skin boats, of fish-factory ships, of the salvage from warships sunk in the Baltic. There's a copper deep-sea diving suit from the 1920s, worthy of Jules Verne. It's hard to image anyone in that kind of armor surfacing again from the deep; the commentary notes it was never used. Just above the right shoulder of the deep-sea suicide suit is the first painting in special exhibition of seascapes by an Estonian artist, Rein Mägar. It's dated 2011, and shows a wild spray of blue and white. The title? Unistus. "Dream." Perfect. Another nudge to keep on doing what I have come here to do.
Leaving Fat Margaret, I look at the interesting building across the street, which pays distant homage to the Tudors. Now a children's library, this building at 73 Pikk was formerly the Tallinn headquarters of the Soviet KGB. A nice progression. At the Museum of Occupations, I watched the former deputy head of the KGB in Tallinn, Vladimir Pool, recalling on camera his experiences when he was trying to monitor the growth of the Singing Revolution in 1988, three years before the popular movement in the Baltic countries helped trigger the collapse of the Sovet Union. The KGB boss had his agents phoning in estimated numbers of Estonians arriving for a songfest that had been shaped as a cry for freedom from Soviet rule. Pool was astounded as his agents reported ever-growing numbers of people. He lost contact with one of his agents. The man called in. "Fifty thousand now," he reported. (The number was to get much larger). Then the agent added, "Soviet power has just gone down the toilet."
In the evening, I walk along Soo Street, northwest of the Old City, to a studio in an old wooden building where I open the first session of my Active Dreaming workshop. People are excited; some have read Conscious Dreaming in its Estonian edition.
As we go round the circle, making our introductions, I feel that a grand communal adventure is beginning.
A young Estonian man tells us, "I am here because I feel an ache in my belly when I have to come back to the body from my dreams."
An older woman says, "I am here because your book gave words for how I have dreamed all my life."
A computer programmer says, "I'm here because my dreams have returned after years of amnesia but I'm clueless."
A beautiful woman announces, "In my dream, I saw Russians driving around crazily on a monster, aggressive lawnmower in front of my dream home and I want them off my grass." 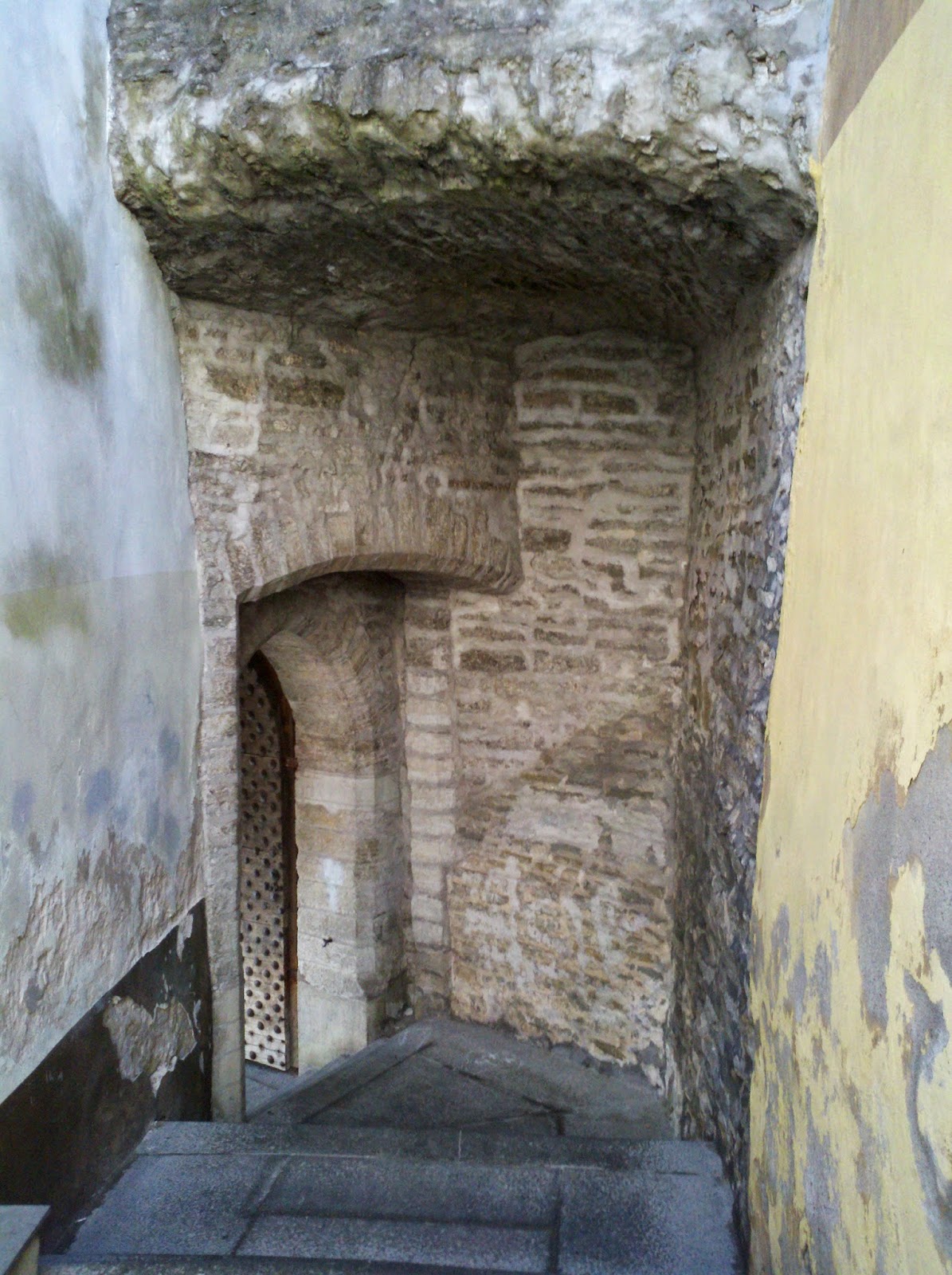 The soul song that will not die and the dreams that return holding hope threaded through the stories of loss, grief, independence stolen, atrocities committed...

May the gracious, good gifts of dreaming continue to flow and the songs of new life continue to rise.

Thanks for bringing us these stories.

Carol - thank you for joining in the soul singing. On Monday, we sang runo-songs in a sacred grove. The oaks and birches and lindens were still leafless, but the power of the singing made winds of spirit around us.