Journal excavation and the magic of hand writing 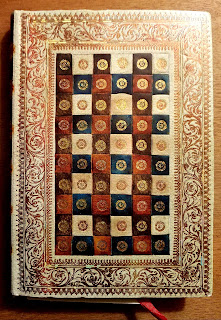 I find there is magic in writing by hand. I prefer to write with a fountain pen, or in pencil. In the old days I used to carry rather fancy fountain pens.

In a village cafe where I was signing for a catered lunch that was going to be delivered to one of my workshop groups, I signed the bill with a fountain pen.

The man behind me said, "You're a writer!"

"Who but a writer uses a fountain pen. What's your name?"

"Robert Frost has done that already."

Things have changed. I am far less at risk of being mistaken for Robert Frost because in these times of pandemic you won't find me out and about signing for things. Also,I got lazy about fountain pen maintenance so instead of those fancy ones I use disposable Pilot Varsity pens and just throw them out when they run out of ink or get hopelessly clogged.

The biggest change, however,is that I'm not writing much by hand because my writing has become largely illegible, even to me. So at home, where I have been nearly all the time since March, when I follow my practce of starting the day by wrting dream reports or writing from my dreams, I go to a keyboard and type. I will often do a sketch a little later in the morning.

I was writing by hand every day during my pre-pandemic travels, which had me on the road roughly half the days of the year. I am still in process of transcribing what is in all those travel diaries - and in the big college-ruled five subject notebooks where I used to record my dreams thirty years ago.

When I embark on tne task of transcribing handwritten pages, I frequently find I am digging up real treasure. Here's an example. In a travel journal from six years ago I found a dream report that came alive in glorious color, pulsing with energy and mystery today, as it did them, when I made a sketch from it. This is the transcription, unedited:

Ready to Paint It Red

I am wandering through an immense and beautiful art museum. In one of the rooms, the ceilings are beyond cathedral height, and as far up as I can see there are enormous paintings in softly glowing pastel hues. I know these images are sacred and they have something to do with ascension towards successive levels of a Higher Self.
I am carrying an open can of red paint in one hand and a paint brush in the other. The paint is bright crimson, fire engine red. The brush is large enough for a house painter but I think it is the kind an artist would use to cover a wide area very quickly.
Through an open doorway, I look at a small group of people clustered around a professor who is talking to them about the large framed painting in front of them. This is a special invited group. The picture shows a stone tub, possibly limestone, that looks like it could be filled with water. Hooded figures in white and light-colored robes are around it, evidently waiting for some event.
In mid-sky, in the picture, there is an arc of light. Figures are moving along this arc in the sky. Some are mounted, some on foot. They appear to be in many sizes. They are golden, and glowing.
There is something of the quality of the Journey of the Magi about this painting, but the images are not explicitly Christian.
I am fascinated by the stone "tub". I can't find the right word for it. It could be a sarcophagus, but the feeling is of coming birth or baptism rather than of death.
My high excitement and curiosity are with me as I become fully lucid inside the scene.
I hear these words streaming through my mind: 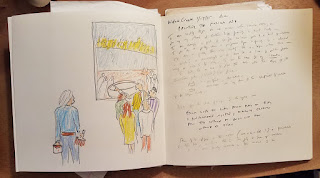 I rise into the California morning charged with energy and excitement.
I want to know what my dream self means to do with that red paint. I think of it now as life blood, blood of spirit. I feel I want to fill that hollow tub with this blood of spirit and see whether this will provide a medium of manifestation for those glowing spirits in the sky.
I am reminded of a big dream from many years ago in which I led a special group of invited guests along a spiral path, past a great stone lion with a huge carnelian on his back, into a gallery space with an immensely high ceiling. We studied an unfinished painting of incalculable size. Within it, a life size human figure was as small as a candle flame in proportion to the shapes that rose around and above him. I understood that this was an unfinished portrait of the Higher Self. I was the professor in that dream. In the new one, I am watching my second self - I am almost certain - play professor while I get ready to lay on the red paint.

Hello Robert-
from my intuition -this dream has an alchemical dimension-
of the three stages -heaven- the high realms-the earth-marble bassin cleaning, -recieving - dreams and luna place
to show up for the subconcious and souls wisdom-
the red colour and brush is like the presence
of the rising sun - with the possibility to bring it into life
so that it has blood and flesh and most important
a heart.
thank you for sharing this precious dream
greetings Ulrike