Dreams may be secret wishes of the soul 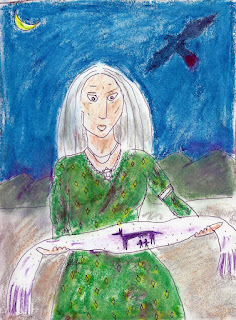 Dreams are experiences of the soul, and they can recall us to the soul’s purpose, as opposed to the petty agendas of the ego. This understanding is central to the practice of dream healing among many ancient and indigenous peoples.
When I moved to upstate in the mid-1980s, I started dreaming in a language I did not know, which proved to be an archaic form of the Mohawk Indian language, laced with Huron. I studied Mohawk to decipher my dreams, but the meaning of one curious word eluded me. I recorded it as ondinnonk. I eventually found the meaning of this word in reports by a Jesuit who had lived among the Hurons in the early 1600s.
I will share some brief excerpts from Father Paul Ragueneau’s explanation, since it opens out an ancient approach to dreaming and healing and the responsibilities of the community to both that suggests rich possibilities for Active Dreaming in our own times.
Reporting from the Jesuit mission to the Hurons in the winter of 1647-8, Father Ragueneau wrote:

In addition to conscious desires that arise from a previous knowledge of something we suppose to be good, the Hurons believe that our souls have other desires, which are, as it were, both natural and hidden... They believe that our soul makes these natural desires known to us through dreams, which are its language. When these desires are accomplished, it is satisfied. But if, on the contrary, it is not granted what it desires, it becomes angry; not only does it fail to bring the body the health and well-being it might [otherwise] have wished to bring, but often it even revolts against the body, causing various diseases and even death…Most of the Hurons are very careful to pay attention to their dreams, and to provide the soul with what it has represented to them during their sleep…They call this Ondinnonk, a secret desire of the soul expressed by a dream

Among this dreaming people, satisfying the secret wishes of the soul is the key to healing It is the task of the community to listen attentively to dreams, to help the dreamer identify the soul’s purpose as revealed in dreams, and to take creative and decisive action to honor and act on the dream. This may involve community theatre and performance, parties and gift-giving, making talismans or embarking on a journey or honoring the ancestors.
Father Ragueneau continued: “They believe the soul is pleased when it sees us take action to celebrate a favorable dream, and will move faster to help us manifest it. If we fail to honor a favorable dream, they think this can prevent the dream from being fulfilled, as if the angry soul revokes its promise.”
In the practice of the First Peoples of Northeast America, as in our contemporary lives, dreams bring us healing by connecting us with the purposes and the energy of soul.

For much more on ondinnonk and the practices inspired by the understanding that dreams may reveal secret wishes of the soul, see my book Dreamways of the Iroquois: Honoring the Secret Wishes of the Soul (Rochester VT: Destiny Books, 2004).

Art: My drawing of the Huron-Mohawk arendiwanen ("woman of power") who called me in dreams and gave me the word ondinnonk and with it a powerful approach to dreaming and healing that helped shape my own teaching and practice.

My husband dreams of my death!

Oh it is all so interesting!
Thank you Robert, and thank you for your talk at the Dreamwork Summit just now, Nov. 13th. :) I just listened. I very much appreciate all you said and shared. I'm very intrigued about the 'places' 'sites' 'forums' where we can go and share our dreams, like you suggested. I am such a dreamer.. hahaha, that sentence made me laugh, as yes, I'm a dreamer as in I'm a visionary entrepreneur with many dreams to manifest. "What you dream awake creates reality" is/was my mantra for that. But on another level, yes, I'm a dreamer. I dream vividly and have what I call 'initiation dreams'. I would love to share and discuss and get insights and listen to other people's dreams and work with it all. Perhaps I'm a Dream~worker then!? Hmmmm... Maybe. Could be. Yes I am. Haha.. Oh gosh, this is good. Thank you again Robert. Hope to hear from you if you would be so kind as to direct me in a good direction where I can discuss and share. Much appreciated. Kindly and warmly, Sóley :)

I would like to share that I have experienced many synchronicities in connection with you in regards to dreaming and the red-tailed hawk. Experiencing all that I have has been an awesome and soul-nourishing adventure. A few months ago, I ordered Dreamways of the Iriquois and the day it arrived in the mail was a day I will never forget. I could just feel magic rippling through the oceanic ether. When I went outside to get the mail, just as I was reaching into my mailbox on the front side of my house, I watched as a hawk flew overhead directly above where I was standing. Then a short while later I decided to go for a walk on the bike trails near my house which run along beside the Big Sioux river and as I walked near some trees located in Elmwood park, all of a sudden there were 2 hawks flying in the air above me. As I watched the hawks, it was as if I could actually feel some sort of shift in the ether and I felt like I was in a dream-like state. It was then that one of the hawks called out as it flew above me. This was the first time I had ever heard a hawk's voice!! I could feel the power and meaning of it all directly in my heart and spirit. Ever since this experience synchronicity has unfolded to reveal so much more in my life that I am so grateful for. Recently, I have joined a dream group which is lead by a woman who has taken many of your dream workshops before. The very same week that we officially started our dream group, I came upon a dead red-tailed hawk as I was on a walk. The hawk was on its back in what looked like a "phoenix" position in some grass that was below power lines with transformers. Further investigation by later finding more of its feathers in the grassy area where I had first found it dead revealed that the hawk must have been electrocuted on the power lines somehow because these feathers showed signs of being singed and burned on the edges as well as where they had been attached to its body. I think these feathers may have gotten stuck to the power lines and a few days later fell down because they were not there the day I found the hawk. To make a long story short, although the hawk was dead, I ultimately felt it was a good omen and holds powerful messages in connection with power, dreaming, transformation, and death as an ally. To honor this red-tailed hawk I performed a beautiful ceremony for it in my backyard and placed it in the arms of the Great Mother Earth. I now bring one of its red tail feathers to every meeting of our dream group and it is my deepest wish to soar to on its wings and see my life roads from its sky. My heart becomes so filled with gratitude as I recall all of the synchronicities. I am grateful for all I have learned and discovered through your knowledge and guidance, Robert.