Atlantis-haunted: Tolkien and the Bent World 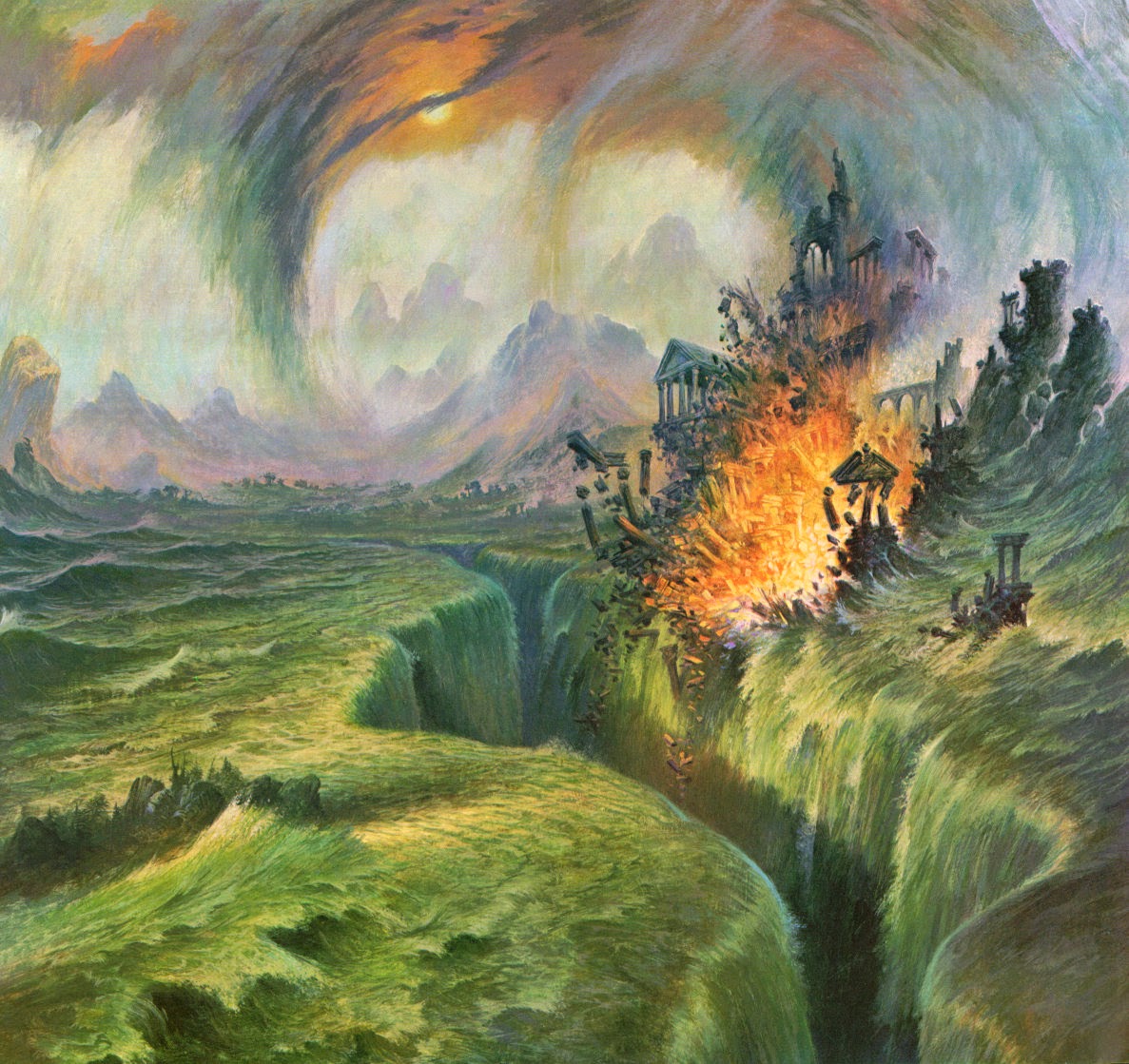 A recurring dream of the drowning of Atlantis was the secret engine of some of J.R.R. Tolkien's greatest work. As he described this work in a letter:

This legend or myth or dim memory of some ancient history has always troubled me. In sleep I had the dreadful dream of the ineluctable Wave, either coming out of the quiet sea, or coming in towering over the green inlands. It still occurs occasionally, though now exorcized by writing about it. It always ends by surrender, and I awake gasping out of deep water. I used to draw it or write bad poems about it.

Tolkien came to suspect that the dream of the downfall of Atlantis may have been ancestral memory, passed down through the generations, especially after his son Michael shared similar dreams with him before they had ever discussed the dreams of the father. Tolkien spoke of his "Atlantis-haunting."
In many unfinished drafts and sketches, as well as in his most famous works, Tolkien attempted to describe the fate of Atlantis before and after the fall. He gave it many names, settling on Númenor for the civilization at its height, and Atalantê - directly evoking "Atlantis" - for the drowned world. In The Lord of the Rings, Tolkien transfers his dream to Faramir, dreaming of the fall of Númenor . The short fourth book of The Silmarillion, titled Akallabêth (The Downfallen in Adunaic , one of Tolkien's invented languages) we are given Elendil's account of the destruction of Númenor.
For me, the simplest and earliest of Tolkien's many versions of this theme is the most stirring and provocative, hinting at a workable geography of a deeper reality that may be directly relevant to our condition today. This is a two-page sketch for "The Fall of Numenor", published by Tolkien's son Christopher at the start of The Lost World and Other Writings, volume 5 in The History of Middle-Earth. In the story outline Tolkien describes how, when the gods decided to punish the Numenorians/Atlanteans for their crimes, they "globed the earth".

The Gods therefore sundered Valinor from the earth, and an awful rift appeared down which the water poured and the armament of Atalantê was drowned. They globed the whole earth so that however far a man sailed he could never again reach the West, but came back to his starting-point.

This was the creation of what Tolkien came to call the World Made Round. Before the bending of the world, a traveler could sail West in a straight line towards the realm of the gods (though few humans were welcome to go all the way). Now, in our "bended" (or bent) world if we travel West and keep on going for long enough, we merely come back to where we started.
On a higher level of reality, however, above the clouds of our consensual hallucinations, the Line of the Gods still runs straight. Unless you are an elf, or at least an elf-friend, however, you have little chance of finding the straight path. Tolkien's dream of Atlantis not only spurred him to become a world-maker, a master shaman of the imagination; it made him a world-rememberer, offering a vision of the sources of our human condition and a possible path (through travel in dream and in time) of transcending our bent condition. Makes you think twice about the possible merits of being a flat-earther.

Of related interest: A Robert Moss vision of Atlantis

Graphic: "The Fall of Numenor" by Darrell Sweet
Posted by Robert Moss at 3:16 AM

Reminds me of daughter Maia taking tutorials with the libraian at Oxford re Tolkien.

I'm thinking of needing someone to talk to about dreams and empathy.

When I read this article about Tolkein's "dreadful dream of the ineluctable Wave" I was reminded of my own dream experiences.Do we know how old Tolkein was when he had these recurring dreams? I've been nearly drowned in a dream tsunami for the past 2 years and it seems to be related to a major life transition - a decision to take early retirement. Since I opted out of my stressful career, a couple of months ago, I now watch my dream tsunami through a large picture window from a safe building. The wave is awesome, crystal clear and spectacular. I just wish I had the literary genius to turn my tsunamis into great works as Tolkein did. As I've opted out so that I can spend more time writing - at least I'll now be able to try :)

Jo - thanks for sharing. I like the evolution in your tsunami dreams, from being nearly drowned to watching from a safe place. I've worked with another dreamer who had a recurring tsunami dreaming that left her terrified and gasping until she dreamed she was in a glass bubble that kept her safe - though still frightened - while the great wave crashed over her. Eventually she dreamed she could catch that wave and ride it.

Tolkien's dream of the giant wave appears to have dated back to his early boyhood. He was never able to change the outcome, which he regarded as ancestral memory - AND as the experience of people to whom he was connected in an another time - of the actual fall of Atlantis. He could not change the dream, but he used the energy of the great wave as a dynamo in his work that kept running (and in some ways kept HIM running) throughout his tremendous literary and scholarly career.

Robert,
You are the master of the evocative post! I love this new understanding of Tolkien's source imagery.Other people have commented, and you have added, on examples of large wave dreams. I have been painting my dream from this weekend of being in a very small boat on a tsunami sized wave--realizing I could die, and then the boat landed safely and amphibiously.

And GLOBING the earth to erase the old, straight track to the gods--don't you love how that twists and turns in the back allies of your mind?

Thank you for bringing this card to me today...

Thanks, Sandy. At my other (Dream Gates) blog I posted a recent essay on the giant wave in the dream life of people today; you'll find that here - http://blog.beliefnet.com/dreamgates/2011/01/dream-symbols---tsunamis-and-monster-waves.html.

Tolkien simply couldn't leave this theme, though he did not publish any extended account. It haunted him all his life, and he firmly believed this was ancestral memory. I'll write more on this.