Yggdrasil, a Place to Stand 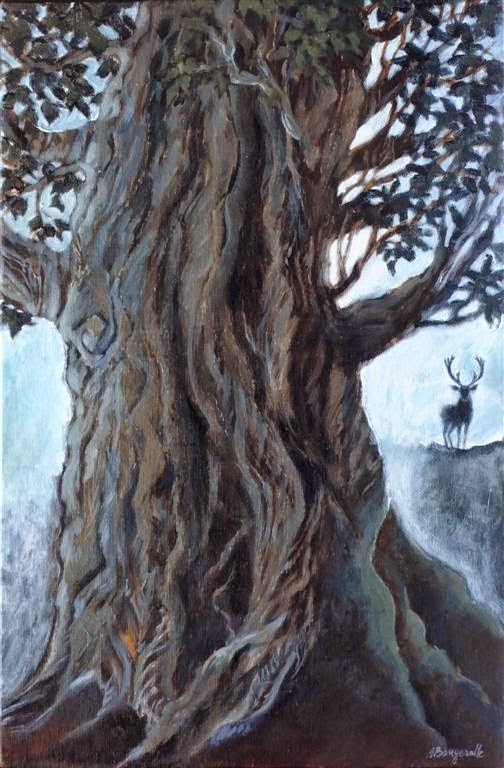 The red fox stands beside the tree gate.
I’m never at ease when he shows himself,
but he is flanked by the black dog,
ever watchful and reliable, a true guardian,
and there seems to be no conflict between them.
This is new. I could take the open door
down through the roots of the world tree
but I am distracted by the frisky moves
of a squirrel that is running down the trunk.

He is as big as an elephant, perfectly in scale
with the tree that rises into the clouds
and could contain cities. His presence confirms
I am at the place where a shaman-god
hung for nine days and nine nights,
sacrificing himself to himself.

Rattling his nuts, the squirrel of mischief
plunges into the Lower World ahead of me.
He is playing his old game, Wake the Dragon.
Fire and stink rise from the roots of the tree.
Earth shudders. The squirrel snickers in glee.
Ratatosk, Ratatosk, Ratatosk.
Here he comes back again.
He scurries up the tree, all the way to the top,
telling tall tales to anger the heaven bird
that keeps watch over all the worlds.

Dragon rises. Branches of the world tree
creak and groan as the eagle shakes out its wings
and comes down, talons eager for battle.
Between them, on a ledge in the tree world,
I see a man in a grey robe, with a broad-brimmed
grey wizard’s hat. There are birds on his shoulders
and a great company of birds all around him.
Lightning is with him. His eyes flash, his hands
spark white fire from the air. His form is never still.
He is the ancient of days, he is the magic man,
he is the young deer prince, antlered and horny.

As the dragon rises to join battle with the heaven bird,
he catches it by the throat with his left hand. His body
twists and buckles as he struggles to hold this power
and raise it. It is pulling him down, tearing him apart,
until he lifts his right hand, palm downward, and the eagle
lands on his wrist as the falcon returns to the falconer.

The balance is  made. The powers of above and below
are joined and turning together, evenly matched.
This is how the game of the world goes on.
The man with lightning eyes is calling me.
Come. Stand where I stand. See what I see.

I am drawn to him as the sparks fly upwards.
On his edge between the worlds,
my body stretches beyond itself,
my mind cracks open like the squirrel’s nuts.
Ratatosk, Ratatosk. There is a role for mischief.
And I have found the right place to stand.

From a vision while leading a group shamanic journey through the Tree Gate at the Hameau de l’Etoile, near Montpellier. We danced on the mythic edge all week, and my dreams and visions - like those of many in our gifted circle - often turned on Greek themes. But on a certain day, I was hurled deep into an indelible scene that seemed to come from the Nordic imagination.