A document from a a possible future describing a the practices of a commonwealth of dreamers. 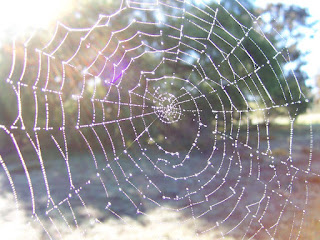 In place of a constitution, Dreamland has a charter that the founders titled

One of the rules reads as follows:

When a decision is required on a matter of community importance, the people must come together in the Big House and make a web.

In the first years of Dreamland, when the community was small, there was only one Big House, built of very simple materials around a great tree that rose through the roof like a ladder into the sky. Now Dreamland has many Big Houses, but the making of a dreaming web is essentially the same. Standing in a great circle at nightfall as they sing songs of Earth, the weavers raise the Mother’s energy into the vital centers and share it hand to hand, giving and receiving. When the energy is flowing strong between them, they each project ropelike energy cords to a common center and began to weave and shape the web. The cords flash with many colors, but as they interweave they glow sparkling white. When the chief weavers are satisfied that the web is strong enough to serve the group intention, the dreamers lie down in a cartwheel on the floor.

Lying together in the dark, with their web of dreaming glowing above and around them, the dreamers sing their group intention, over and over. As they sing, the web grows. It will grow until it has brought within it everything the dreamers need to see and know. As the energy filaments stretch, they may encompass the whole planet. All times are accessible. Years or centuries may slip by, like blown leaves, in the group perception. While the group visions together within the web, individual Dreamers move along its strands, agile as human spiders, and drop down on scenes they choose to see close-up.

At daybreak, the Dreamers share their perceptions, and the necessary decision becomes clear. They say there is no need to count heads when hearts are joined and connected to the heart of the Mother.

Text adapted from "Dreamland: Documents from a Possible Future" in Active Dreaming by Robert Moss. Published by New World Library.