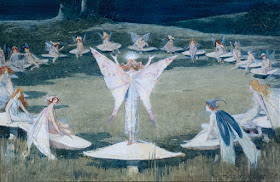 Robert Kirk, a seventeenth-century Anglican vicar at Aberfoyle in Scotland, wrote a remarkably detailed account of the Otherworld, its inhabitants, and their intercourse with living human beings. He wrote it by hand, as magical texts need to be written, with the greatest of  care, in 1691. Kirk’s Secret Commonwealth is not another collection of folklore and popular beliefs but a rigorous study, scientific by the standards of its day, that is clearly grounded in experience. Its main interest today is that it describes a “secret way of correspondence” with the invisible world: a means of crossing between ordinary and nonordinary reality at will.

Kirk subtitled his work “An Essay of the Nature and actions of the Subterranean and for the most part Invisible People, heretofore going by the names of Elves, Fauns and Fairies and the like.” By “subterranean,” he does not mean creatures living in dark, gloomy places in the bowels of the earth. Their realm is full of light, though it is not lit by any sun. They live in “cavities” and may pass wherever air may go. The earth is “full of cavities and cells,” and everywhere is inhabited; there is “no such thing as pure wilderness in the whole Universe.”

Though invisible to most humans, the inhabitants of these realms are not disembodied. They have “light changeable bodies, like those called Astral, somewhat of the nature of a condensed cloud.” They are best seen at twilight. They shape-shift and can make their “bodies of congealed air” appear and disappear at will.

The fairies are “of a middle nature betwixt man and Angel,” like the daimons of the ancient world. They are mortal, in the sense that they pass from their existing state, but they live far longer than a human life span. They are strongly connected to the earth and special places within the earth. They tend to show themselves in the costume of the country and speak its language. Kirk discusses rival opinions in his parish about whether the “good people” are spirits of the departed, clothed in their subtle bodies; “exuded forms of the man approaching death”; or “a numerous people by themselves.” He suggests that all these descriptions may be valid for different phenomena. Just beyond the borders of everyday perception is a vast and varied population.

Encounters with the fairies can be dangerous. They are known to abduct humans into their realm Those who enter the Otherworld willingly may have a hard time getting back. Some inhabitants of the invisible realm are hostile to humans, and some seek to feed on the energy of the living. However, the peoples of the Secret Commonwealth take a close interest in human affairs, and our lives are closely related to theirs.

One of Kirk’s most intriguing observations is that each of us has a double who is fully at home in the Otherworld. The old Scots Gaelic term for this double is coimimeadh (pronounced “coy-me-may”), which means “co-walker.” Kirk improvises a series of synonyms for the double, including: twin, companion, echo, “reflex-man,” and living picture. The double resembles the living person both before and after she or he dies. The double survives physical death, when the co-walker “goes at last to his own land.” When invited, the co-walker will make itself “known and familiar.” But most people are unaware that they have a double. Since it lives in a different element, it “neither can nor will easily converse” with the everyday waking mind.

Your double may be seen by others. Kirk gives several examples: of someone’s double entering a house shortly before the person himself arrived; of sightings of the double of a person who had just died or was soon to die; of the perception of the subtle form of a lover or spouse standing close to the loved one; of a woman who observed her second self walking ahead of her as she left her home. Kirk also offers clues to the possible influence of the co-walker — even unrecognized and unperceived — in a person’s life. He cites the Scots belief that someone who eats great quantities of food without putting on weight is being joined in the gourmandise by a “joint eater” or geirt coimitheth. Maybe there is a tip here for a new weight-loss program!

Rereading The Secret Commonwealth, I asked for dream guidance to clarify exactly what Robert Kirk means by “co-walker.” In my dream, I acquired a suede coat identical to the coat I most often wear when flying around the world or traveling to my Active Dreaming workshops. In my dream, I carried both these garments, swapping them according to circumstances. The dream confirmed my suspicion that Kirk is writing about the dream double; unfortunately, he tells us little about dreaming, where the double is most easily perceived.

Kirk speculates that everything may have its double — a tantalizing hint of the existence of what I have called counterpart reality.

How can we know the truth about these things? Through the art and science of seeing. Robert Kirk describes the practice of the Scottish seer as he was able to understand and enter it. The seer is able to make spirits visible to himself and others. He is able to cross into the Otherworld and return at his choosing. Kirk includes a curious report of a seer who was seen to vanish, body and soul, from a certain spot and reappear an hour later some distance from the point of his crossing.

The gift of seeing runs in certain families, but many of the most powerful seers receive their calling directly from the spirits. Their initiatory visions are often wild and shamanic; they gall into “fits and Raptures.” The gift of seeing brings the ability to look into subtler orders of reality and perceive things “that for their smallness or subtlety and secrecy are invisible to others” even though they are intermeshed with them. The seer is accompanied by an inner light that can be focused and directed, “a beam continually about him as that of the sun.” Kirk’s description of the taibhsear’s “beam” closely parallels Inuit accounts of the “shaman-light” of the angaqok.

Kirk provides an interesting account of a seer’s initiation. He winds a cord of human hair around his middle in the shape of a helix. He bends down and looks backward between his legs. The object of his gaze may be a funeral procession, moving over a border crossing. Or it may be a hole in a tree — like the hole left in a fir tree when a knot has gone.

Kirk describes how a seer can provide a layman with temporary access to the Sight. The apprentice places one foot on the seer’s foot, while the seer lays a hand on the apprentice’s head, so that the would-be seer is enclosed within the taibhsear’s body space as well as his energy field. as he looks over the seer’s right shoulder, the apprentice is suppose to see “a multitude” of beings rushing toward him through the air.

The gifts of seeing include the ability to fold time and space. Kirk cautions — as any good practitioner would — about the difficulty of interpreting and working with some of these sightings. He recounts the case of a woman with the Sight who foresaw a seaborne attack on her island in the Hebrides but was confused about whether the soldiers in the boat were hostile or friendly and even whether they were coming or going — with good reason, since they had stolen a barge from her island and were rowing toward it with their backs to the shore.

As a man of the Church, Kirk goes to great lengths to argue that there is nothing ungodly about “correspondence” with Otherworld beings, quoting reports of visionary experiences in the Bible. He also contends that it is as “natural” to encounter the inhabitants of the Otherworld as it is to go fishing; both involve moving into another element. He reassures us that we are dealing with “an invisible people, guardian over and careful of man,” whose “courteous endeavor” is to convince us of the reality of the spiritual world and of “a possible and harmless method of correspondence betwixt men and them, even in this life.”

According to local tradition, Robert Kirk paid for his knowledge. He was reputedly taken by the fairies in 1692 into a fairy knoll across a little valley from his church; villagers were still pointing out the site centuries later. Were the fairies annoyed with him for revealing their secrets? Or had they fallen in love with him? Maybe the tale was concocted by people who wanted to “spook” their neighbors into keeping away from personal exploration of the unseen. Some say the fairies took Kirk’s body and soul; some say only the soul. A related tradition says that he had a means of coming back from the Otherworld that depended on the actions of a cousin to whom he announced it in a dream. But the cousin lost his nerve when he saw the clergyman’s double appear in the church at a baptism. So Robert Kirk remained on the other side.

Text adapted from Dreamgates: Exploring the Worlds of Soul,Imagination and Life Beyond Death by Robert Moss. Published by New World Library