Jung on the Virtue of Making Dream Pictures 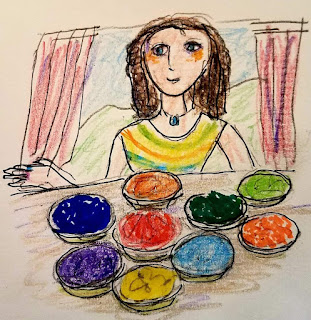 In his 1929 lecture "The Aims of Psychotherapy", Jung issued a passionate appeal for art therapy - specifically, for the art of turning dreams into pictures.
First, he notes that it was often a very positive development in a patient's inner life when their dreams featured photos, paintings or films and even more so when the dreamer declared "If only I were a painter I would make a picture of it". When this happened he would encourage his patients to actually draw or paint their dreams and abandon any protestations that they lacked artistic ability. "Many of my more advanced patients, then, began to paint."
He noted that this shifted the dreamer away from a passive attitude to dreams, and to life. "He puts down on paper what he has passively seen, thereby turning it into a deliberate act. He not only talks about it, he is actually doing something about it."
In making a dream picture, the dreamer comes to reflect on a dream in depth and starts to bring vital energy from the dreamworld into embodied life. "The concrete shaping of the image enforces a continuous study of it, in all its parts, so that it can develop its effects to the full. This invests the bare fantasy with an element of reality, which lends it greater weight and greater driving power."
He insists that making art from dreams helps the dreamer to become "creatively independent". The patient no longer depends on the doctor's opinion. "By painting himself he gives shape to himself." He has gone beyond ego to work with his "interior agent" and "the hidden foundation of psychic life".
Then he goes right to the top, or perhaps over the top. 'It is impossible for me to describe the extent to which this discovery changes the patient's standpoint and values, and how it shifts the center of gravity to his personality. It is as though the earth had suddenly discovered that the sun was the center of the planetary orbits and of its own earthy orbit as well." [1]
Painting Philemon 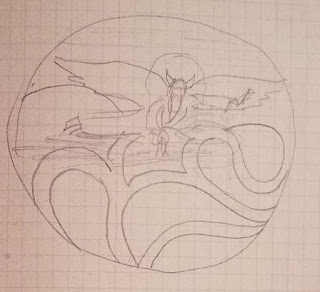 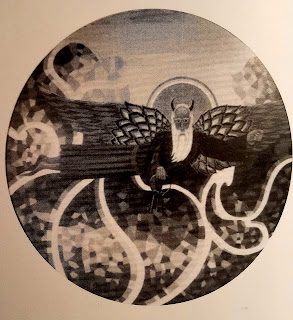 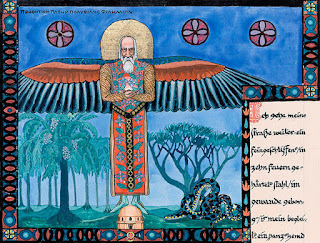 "Since I did not understand this dream-image, I painted it"
In 1914 Jung dreamed of a figure he called Philemon. He came to play an extraordinary role in Jung's imaginal life. In Memories, Dreams, Reflections, he recalled:
"There was a blue sky, like the sea, covered by flat brown clods of earth. It looked as if the clods were breaking apart and the blue water of the sea was becoming visible between them. The water was the blue sky. Suddenly there appeared from the right a winged being sailing across the sky. I saw that it was an old man with the horns of a bull. He held a bunch of four keys, one of which he clutched as if he were about to open a lock. He had the wings of a kingfisher with its characteristic colors.
"Since I did not understand this dream-image, I painted it to impress it upon my memory."
The tremendous - indeed Otherworldly - significance of the dream encounter was confirmed for Jung when, a few days later, he came upon the body of a dead kingfisher, a bird rarely seen around Lake Zurich.
He said in his memoir that “Philemon and other figures of my fantasies brought home to me the crucial insight that there are things in the psyche which I do not produce, but which produce themselves and have their own life. Philemon represented a force which was not myself. In my fantasies I held conversations with him, and he said things which I had not consciously thought. For I observed clearly that it was he who spoke, not I.
"He said I treated thoughts as if I generated them myself, but in his view thoughts were like animals in the forest, or people in a room, or birds in the air, and added, “If you should see people in a room, you would not think that you had made those people, or that you were responsible for them.” It was he who taught me psychic objectivity, the reality of the psyche. Through him the distinction was clarified between myself and the object of my thought. He confronted me in an objective manner, and I understood that there is something in me which can say things that I do not know and do not intend, things which may even be directed against me.”
Jung's first portraits of Philemon - at least, the first that have survived - are a pencil drawing and a study for a lost picture that once hung in the room of Jung's wife Emma. They are reproduced in the lavishly illustrated book The Art of C.G.Jung, recently published by the Foundation of the Works of C.G.Jung. Their great interest is that they show the bull horns and a vigor of flight that are missing from Jung's later painting of Philemon in The Red Book.
1, C.G.Jung, "The Aims of Psychotherapy" in Collected Works volume 16 trans R.F.C.Hull (Princeton: Bollingen Series, 1985) 47-49
"Lady of Many Colors'. Dream drawing by Robert Moss.
Posted by Robert Moss at 12:00 PM