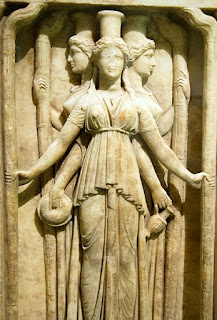 As I drifted in the liminal state between sleep and awake, I imagned myself entering the great temple at Eleusis. I was received by a priestess wearing a gold bee with outspread wings at her throat.

I asked to meet the deity who would appear to me at the climax of the Mysteries. She was scary to begin with. There was something like an immense cobweb that parted, and snakes, and a dark bird rushed from her eyes. She seemed to have owl eyes in the lined and craggy face of a crone.

Then the old woman’s face rippled like muslin curtain, and I saw her three-formed, all three bodies and faces beautiful. The central one facing me was that of a mature woman, the ones on either side looked younger. They were conjoined, not stuck together, vibrating in constant movement, capable of taking other forms but content to present themselves in the most lovely shapes for now. A reward for the initiate who finds the courage to part the veil, to come and go from the Underworld at will. No doubt about it: This is Hekate time.

I reflected on offerings made to Hekate in ancient times. Food for sure: raw eggs, olive oil, honey, bread and cakes, beer. Since juniper is one of her special trees (small figures of Hekate were often carved from juniper) gin would be a modern addition.Neo pagans offer food from the meal they prepare each month at the dark of the moon, before or after the mortals eat.

Hekate is Lady of Crossroads. She is also called Apotropaia (The One Who Turns Away Evil) and Enodia (In the Road) and the Key Holder.She is not only the Lady of Crossroads to be invoked when you are traveling this world or between the worlds. She is threshold guardian. The Greeks put little statues or emblems of Hekate at their doors. In Miletus these were small stone cubes,or wreaths. Larger temples might have little shrines to Hekate just inside their gates.

Pausanias in his Description of Greece (5th century bce) wrote that "Of the gods, the Aeginetans worship most Hecate, in whose honor every year they celebrate mystic rites which, they say, Orpheus the Thracian established among them. Within the enclosure is a temple; its wooden image is the work of Myron, and it has one face and one body. It was Alcamenes, in my opinion, who first made three images of Hecate attached to one another, a figure called by the Athenians Epipurgidia (on the Tower); it stands beside the temple of the Wingless Victory." [2.30.2]

Her reputation was darkened and demonized especially after the Church took on the old gods. But the darkening is also the work of dark sorcerers who called on her for low goetic workings  I think of the horrid bestial sculptures of Hekate I saw during a visit to the dusty old archaeology museum in Constanța on the Black Sea coast of Romania. Then known as Tomis, this was the place of exile of the Roman poetyOvid, the great scholar of shapeshifting.

Among Hekate's animals and avatars:

Black dog. One of her Greek titles is Black Bitch, something we would be prudent not to say in English. Cautious translators sometimes call her the autiously render this as Black She Dog. Since I have lived with black dogs most of my life, Hekate is no stranger.

Her role in the Persephone story: she is the one who hears Kore’s cry and helps Demeter in her search. In some of the ancient art, Hekate is with Hermes when he guides Persephone up from the Underworld, holding torches.

Let us note that Hekate enters literature, around 700 bce in Hesiod's Theogony, as a Great Goddess who is not yet deparmentalized. Hesiod speaks of "Hecate whom Zeus the son of Cronos honored above all. He gave her splendid gifts, to have a share of the earth and the unfruitful sea. She received honor also in starry heaven, and is honored exceedingly by the deathless gods. For to this day, whenever any one of men on earth offers rich sacrifices and prays for favor according to custom, he calls upon Hecate. Great honor comes full easily to him whose prayers the goddess receives favorably, and she bestows wealth upon him; for the power surely is with her.

She was worshipped in this way into much later times in Caria in what is now southwest Turkey.Around 125 bce the people of Lagina built a monumentak temple for her where she was honored with lavish animal sacrifices.She was revered not only as a cthonic deity but as city protector, rather like Athena in Athens. The Carians put her image on their coins, just as Athenians put their goddess and her owl on their silver tetradrachmas. Rites of Hekate in Caria included the Procession of the Key. The daughter of the priest of Hecate carried the key from Lagina to the larger city of Stratonikeia,10 km away, where the goddess was honored with animal sacrifice. Then the key-bearer and her retinue traveled back to the temple. [*]

* Amanda Herring, “Reconstructing the Sacred Experience at the Sanctuary of Hekate at Lagina”in Journal of the Society of Architectural Historians (2020) 79 (3): 247–263.