What makes me dive in headfirst, and other words for dream 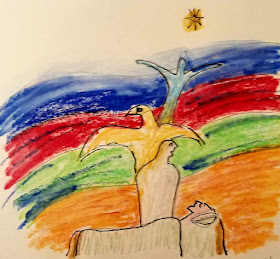 If you want to know more about what dreams can be, consider what the words for “dream” mean in different languages. You’ll find clues here to what dreaming meant to our ancestors, before we lost respect for dreamers and contact with the Dreaming..
How about these:

- a dream is “a journey of the soul” (adekato) for a dreaming people of Venezuela, the Makiritare.

- a dream is a “zephyr”, a gentle breeze slipping through the keyhole, or the crack between the door and the lintel, to breathe in your ear, in ancient Assyria

- a dream is an “awakening” (rswt) in ancient Egypt

- a dream is also a spirit messenger (oneiros) that travels from the Commonwealth of Dreams (Demos Oneiron) in archaic Greece.