Cat versus Chaos in the Mind of Egypt 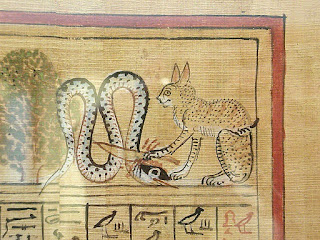 An image from collective imagination of ancient Egypt offers a version of the cosmic battle between chaos and order that I find endlessly intriguing. The serpent is Apep (the Greek version is Apophis) and he personifies the forces of chaos that constantly threaten to overthrow humanity and the gods themselves.
The giant cat is a form of Ra, cutting Apep to pieces with a knife in a battle around the Tree of Life. The long ears on this cat make it understandable that many viewers first thought was "rabbit". In fact the cat is a giant version of the long-eared Egyptian wild cat, Felis libyca Bubastis, which was the genus mummified by Egyptians.
The Tree of Life here is the persea, a small evergreen whose yellow fruit symbolized the heart of Horus. The phoenix is reborn from the ashes of the persea.
"I am the Cat which fought near the persea tree," Ra declares in the Book of Ani, which comments that Ra is also known as Mau, the Egyptian word for cat. I dreamed that a statue of a cat named Mau came alive and presented an atef crown. 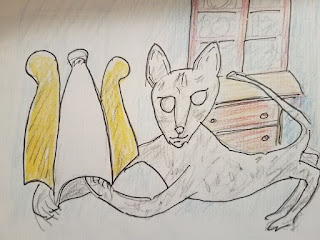 The knife resembles a feather, which some people saw in the image. That may have been intentional in the ancient iconography, since Apep, as a destroyer of civilization, is eternally opposed to Ma'at (Truth) whose symbols is a feather.
The battle between Truth and Lies, Chaos and Civilization, is never over in the Egyptian mind. Every night Apep attacks the barque of Ra. Apep has been hacked to pieces and thrown into the abyss again and again, but he returns. Egyptians made wax images of Apep and mutilated and destroyed them in multi-stage rituals to help Ra in the cosmic battle.
Some say that Apep is a dark shadow of Ra himself, an archaic form that the great god shed as he evolved. Much to dream on here, and perhaps much to illuminate our current complaints, and vice versa.

The Egyptian image is from the the papyrus of Hunifer in the British museum. The drawing of Mau is from my dream journal.