Learning the language of the birds, Australian syle 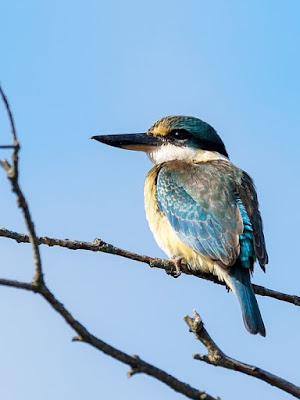 “Nothing is nothing”, they say in the Cape York peninsula. Everything speaks of something else, and to something else. The spirit world and the physical world are interfused. The distance between them is the width of an eyelid, and no distance at all if the strong eye is open.
You know when it is the right time to do something by listening to the land, by recognizing those things that like to happen together. The Yolngu of the Northern Territory know when food is ready to be gathered in certain places because they notice things that like to happen at the same time. When flower blooms in one place you know it is time to harvest in another. When that tree blossoms you know the yams in another spot are ripe and ready to eat. You do not check the calendar for the date of that big initiation ceremony; you know it’s about time when a certain fish is jumping in the river, big and fat.

You learn that the birds are a whole telephone system. Night hunting birds, like owls, are powerful spirits whose call can mean that someone close to you is about to die. Listen carefully to the kingfisher, who lent wings to Jung’s Philemon. Kingfisher can see ghosts. If it calls out ekwe, ekwe, ekwe, watch out for a ghost attack that could inflict illness or even death.
Little willie wagtail is a shaman of shamans among the bird tribes, He dances like a made man in ceremony when he jitters sideways. Watch willie wagtail for any unusual behavior, because this means news is coming. “Him good telephone that fella,” a Ngarrindjeri woman of the Lower Murray told Philip Clarke, who has been helping to map the Aboriginal landscape. *
Listen to water as well as earth, to the voices in a billabong, to the song of a river. Today the indigenous fishermen of the Torres Islands see and feel the “scars on the water” caused by boat propellers and pollutants. Their shaman, the zogo le, flies on the wings of sea eagle, and sees with his keen eyes.