Dr Freud's slips and others 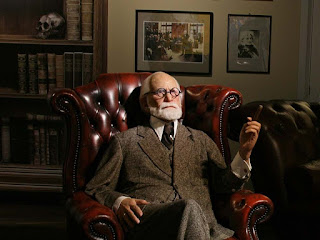 I am leafing again through the book in which Freud gave the most complete account of the phenomenon known (after him) as the Freudian slip. First published in 1901 as The Psychopathology of Everyday Life, it's a collection of essays that was probably better-known and more widely read in Freud's lifetime than any of his other works.
In my favorite local used bookstore, a shelf elf placed a copy of an elderly Macmillan edition, with A.A.Brill's translation, in my line of sight. The paper label on the spine had rubbed nearly away, like the label on a well-soaked bottle of wine, so I had to pull the book off the shelf to see what was facing me, which begins to sound like a Freudian joke in itself.
The merits of Freud's study of slips of the tongue and memory lapses are threefold. First, he assigns meaning to incidents that many of us tend to overlook. Forgetting the name of a town where you once stayed, or giving the wrong name to someone you know perfectly well, isn't simply a memory lapse or passing confusion; it speaks of something in you and your life situation which merits close attention, because you can learn from it. Second, Freud does dreamwork with these incidents, applying the same principles of analysis to episodes in waking life as he applies to dream symbols. Third, his prime lab rat, first and last, is himself. Like Jung (and unlike lesser scientific minds that fail to realize that knowledge is state-specific) he knows that understanding begins with self-knowledge, and that the most important data on inner events (and their interplay with outer events) must be gathered from first-hand experience.
We follow Freud down some interesting trails as he studies such phenomena as forgetting names and otherwise well-known phrases and word substitution. He recounts a chance encounter with a fellow-traveler on a train who begins to quote the famous line, in Latin, in which Queen Dido of Carthage issues a terrible curse against Aeneas, the hero who loved her and left her. Exoriare aliquis nostris ex ossibus ultor (Aeneid, IV 625). "Let someone arise from my bones as an avenger."
In the days where a good education still required Latin, Freud's educated companion would be expected to get the quotation right. But he cannot recollect the harmless indefinite pronoun aliquis. By the end of a long conversation in which Freud guides his travel companion through the free association process he also applies to patients' dreams, they understand that there may be deep significance to the suppression of a seemingly harmless pronoun. In aliquis the speaker now recognizes the echo of "liquid" and "liquefaction" in the Latin word. This reminds him that he's alarmed that his girlfriend may have missed her period. He's scared that he is the "someone" who will be cursed if he abandons his girl and a baby he doesn't want.
Now we come to the defect in Freud's approach to Freudian slips, which he called Fehlleistungen, which means "faulty actions" or "misperformances.". He wants to insist that word-amnesia and name substitution are related to "disturbing complexes" that prompt the psyche to seek to repress memories and information that may cause us pain. We hear of a man who simply cannot remember the name of a business partner who stole his girlfriend and married her; he just doesn't want to know. Freud can't remember the name of a town he knows well (Nervi) when treating a neurotic at a time when he himself is feeling nervous and may be heading for a migraine.
While Freud's theory of repression may apply to some of his examples, there's both more and less going on with our slips and memory lapses than he allows for. Common sense tells us that memory gaps can be the result of all sorts of life factors, from fatigue to drug or alcohol abuse to migraine to information overload. Einstein once made people laugh because, asked for his phone number, he had to look it up in the book. He declared that he had so much on his mind that he didn't need to burden it by adding the need to remember things he could easily look up.
I am generally pretty good with names, so when I call someone I know by a name that isn't their own I pay attention to what may be showing through my slip, In one of my workshops, I kept calling a man "Michael" though I was perfectly well aware that his name was "Don." Finally I asked, "Who's Michael?" Through tears, he explained that Michael had been his partner for many years; Michael had died but Don felt him close and was actually wearing his sweater that day.
One of my rules for life navigation is: Notice what's showing through your slip. To which I will now add: And don't tag it a Freudian slip until you've explored what else may be going on.

Text partly adapted from Sidewalk Oracles: Playing with Signs, Symbols and Synchronicity in Everyday Life, where you will find more on the game of noticing what's showing through a slip.