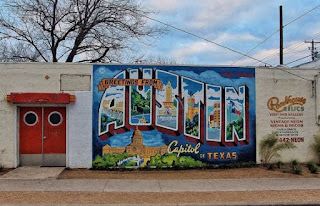 I spent a marvelous evening in Austin years ago, when I gave a talk at Book People, a fine independent bookstore. To warm things up, I asked my audience if anyone would care to define the word “dream”. I expected that someone would say that a dream is something that happens during sleep. I was poised to use a response of this kind as a launch-point to discuss the deeper and wider spectrum of dreaming.
Instead, the Austin crowd offered definitions that took us right into the limitless adventure of dreaming. These were the first four definitions of "dream" that were volunteered

challenging question was posed later by a man who told us that his mother warned him not to go too deep into dreaming because "you can get lost there". She told him this had happened to her, and he saw what this could mean as she succumbed to Alzheimer’s-type symptoms over the years before her death. We discussed how older people sometimes withdraw their awareness into another state of reality, and how we can meet them there – before and after physical death – and have helpful communication. He said he intended to try to reach his mother in her parallel reality now. I hope he succeeded. I know it can be done.