Jung wrestles with the prince of the Casbah 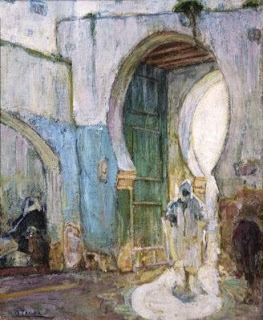 The voice is that of Jung, reflecting late in life on his early travels (in 1920) in North Africa, where he was fascinated to find himself among people whose language he did not know, whose culture was initially utterly foreign to him, and who had a very different relationship to their bodies and their emotions (he thought) than Northern Europeans.
He felt that beyond surface differences he was dealing with a different collective spirit, a spirit of the land itself. He told himself that his feelings were more than a tourist's projections, that there was something out there, a spiritus loci that he needed to explain to himself and eventually to others. He had deeply emotional reactions to everyday scenes: to the buzz of Arab conversation in the casbah in Algiers, to a haughty, magnificent rider on a black mule hung with silver, to Arab men walking hand-in-hand at an oasis in the Sahara, to the sudden riot of color and noise of a market setting up in the early morning.
He feared that he was falling "under the spell of the primitive", that he had been "psychically infected", a condition he saw reflected in his body when he succumbed to a form of infectious enteritis.
He began to fear that his rational mind and identity might be overwhelmed by what "primitive" peoples called ghosts and spirits. He had read Inside Australia, a 1912 book about Aboriginal beliefs and customs by anthropologists Baldwin Spencer and Francis Gillen. His imagination was seized by the reported Aboriginal belief that the ancestral spirits of the land lie in wait for newcomers, and can reincarnate themselves through their progeny. Jung returned this idea again and again. In his essay "Mind and Earth", he wrote that "Certain Australian Aboriginals assert that one cannot conquer foreign soil, because in it there dwell strange ancestor spirits who reincarnate themselves in the new-born. There is a great psychological truth in this."
In North Africa, Jung wrestled with the sense that there was something wild and primal and "barbaric" that could take possession of him now, not in a future generation. He was moving towards a theory of the "objective reality of the psyche", about how just as each of us has a world within, the world outside us is full of spirit, for good or otherwise. But more immediately, he was groping for a way to stay in balance, to master and integrate archetypal forces that threatened to overwhelm him.
In Tunis in 1920, it was a dream that was his mentor and his proving-ground, as was so often the case in his life. Jung dreamed he was in an Arab city with a casbah whose walls formed a perfect square, with a gate on each side, and a moat around (an unlikely element in a North African city). He stood before a wooden bridge leading to a dark, arched portal.             Eager to explore, he stepped onto the bridge. At the mid-point, he was challenged by "a handsome, dark Arab of aristocratic, almost royal bearing". This prince of the casbah attacked him. They fought and fell through the railing of the bridge together. The dark prince tried to force Jung's head under water to drown him, but Jung resisted. "No, I thought, this is going too far." He succeeded in pushing his assailant's head under water. "I did so although I felt great admiration for him. I had no intention of killing him. I wanted only to make him unconscious and incapable of fighting."
After this struggle, the scene changed and the adversary reappeared as as a companion. They stood together in a vaulted octagonal room in the center of the citadel. Everything was white, simple and beautiful. On the floor below him, Jung discovered an open book with black letters written in splendid calligraphy on milky-white parchment. He was reminded of the Uigurian script of western Turkestan, familiar to him from the Manichean fragments of Turfan  "I did not know the contents, but nevertheless I had the feeling that this was 'my book', that I had written it."
He told the young prince that now he had overcome him, he must read the book. The prince resisted, but Jung overcame him again, this time with kindness and patience.
Recalling this turning-point dream in his later years, as he dictated the materials for Memories, Dreams, Reflection, Jung analyzed it in terms that today sound almost stereotypically "Jungian" and yet go beyond. The shape of the casbah or citadel is a perfect mandala, within which the dreamer is journeying to the center of the self. The adversary on the bridge is a "shadow", but in a larger sense that is often understood when that term is used. The Arab prince is "not the personal shadow, rather an ethnic one associated not with my persona but with the totality of my personality, that is, with the self. As master of the casbah, he must be regarded as a kind of shadow of the self."
In his own view, Jung's struggle with the dark prince - like Jacob's struggle with the dark angel - was more than a battle with a denied or suppressed aspect of his ordinary personality. It was a contest in which consciousness, awakened to the power and allure of a previously unrecognized archetype, is challenged to fight in order to befriend.

I lived and worked for many years in the Middle East
( a term used only by Westerners) and can well understand
the 'spell' that Jung experienced. The 'spiritus loci'
can be confusing as well as illuminating and can lead to
responses of fear as is too often seen in media and
public response.
Thank you for shedding light on these
personal and collective responses via Jung's archetypal
dream of the Prince of the Casbah. I will take down and
reread his autobiography with fresh awareness. Shukran.

I am absolutely loving your gorgeous blog!

Very helpful information. Thank you so much for the detailed article
clipping path service