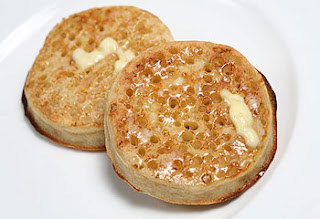 I know this: we can travel across time, and we can play mentor and counselor to a younger self, or receive help and guidance from a wiser older self. At the very least, when we reach to that younger self, we can offer the assurance that however much he is suffering, he will make it through. I know this because I started doing it when I was in my midforties, reaching back to the sick and lonely boy who found it so hard to live in the ordinary world.

The friends who helped me most in this period were invisible to others. One of the best of these friends was the Big Man. He was like a favorite uncle I did not have. One of the lessons he taught me was how to eat crumpets.
The Big Man came to me when I was in my bedroom, sick and lonely and feeling really sorry for myself. It was one of those days when I wanted to leave. I was curled up in the bed, with the covers pulled up over my head. I had been pretending I was in a silken tent in the desert, being waited upon and entertained by dancing girls. But I started coughing until my chest hurt and I was spitting into the basin beside the bed. I fell back, exhausted and desperate, and buried my face in the pillow, hoping to conceal the sound of my coughing from my mother
I felt a presence in the room, then the mattress tipped a little as someone eased down onto the edge of the bed. I thought it was one of my parents, come to check on me. I whispered that I was all right, no worries, which was the kind of fib I told to everyone except myself. A hand closed on my shoulder, squeezing just a little.
“That’s right,” my visitor said. “You really are all right.”
The warm, confident voice was familiar, but I could not put a name to it. I rolled over and looked up into a large, pink face smiling at me from under a mane of white hair. The blue-gray eyes were slightly hooded, a feature my mother and I shared.
“I know it’s hard for you,” my visitor went on. “I know you’re lonely and feel rotten. But you are going to make it through. You’ll be knocked down some more, but you will always get up again. You are a survivor, Robert. Trust me. You will make it through.”
The Big Man was hugging me then. I felt so small and fragile in his embrace, and I could not stop the tears from flowing because I felt safe and because this stranger was holding me as my mother never did, not since I died.
“Write,” he encouraged me. “Write your dreams. Write those adventures that stream through your head when you’re playing with your toy soldiers.”
“Nobody wants to hear my dreams,” I complained.
“You may have to lie low for now. But the day will come when lecture halls will be filled with people who are eager to hear your dreams and to tell their dreams to you. I promise you.”
I did not know what to say.
“Keep up your art. Draw and paint.” He surveyed my room and smiled at the stack of how-to-draw books I had bought with my pocket money.
“You are lonely. But I promise you that the time will come when you will know the love of women and women will love you.”
I must have fallen asleep, because I did not see him go. I did not ask him who he was. I often sensed him nearby when I was alone. When he was close, I felt bigger and stronger.

When we were living in Melbourne, I liked going downtown with my mother on little shopping expeditions. The stately old Myers department store was always the high point of these expeditions. My mother took me to the Myers café for afternoon tea, and I always had crumpets.
I felt the Big Man close to me one afternoon in the café. “Crumpets taste much better with salt and pepper,” he nudged me. “Go on. No one will mind.”
I reached around the pots of jam and marmalade for the shakers, and gave my crumpets a good dose of salt and pepper. The waitress looked at me. My mother just went on sipping her tea. I had done stranger things. The Big Man was right. Crumpets are really nice with salt and pepper.
Many decades later, when I was living in North America, crumpets ceased to be a daily feature of my diet. Americans eat things called English muffins, but these are not crumpets. On rare occasions packets of crumpets popped up in the bread and cakes section of the local supermarket, and I would buy all of them and take them home. Fixing myself a snack in the kitchen of my new home in New York, I popped crumpets in the toaster and as they came out, browned but still delightfully soggy, I sprinkled salt and pepper before applying the butter. And I felt the attunement with that young boy in Melbourne who kept dying and coming back.
“Go on,” I messaged him, mind to mind. “Nobody will mind. You are going to make it through. I promise you.”

Text adapted from The Boy Who Died and Came Back by Robert Moss. Published by New World Library.