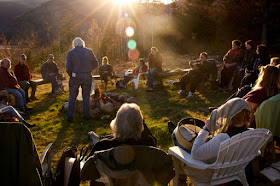 She stands before the fire, straight and tall as a flame, her fierce green eyes blazing. Irene stoops for a moment to make an offering to the fire, a pinch of tobacco, a sprig of sage. Then she carefully unfolds the first piece of paper. She reads aloud the following statement she has written: “I give to the fire all deep, encrusted feelings of powerlessness that drove my ancestors, our beloved men, into alcohol dependency.”
She consigns the paper to the fire, and the fire takes it hungrily.
She unfolds the second message and reads it in a clear, ringing voice so that even the people on the edge of the circle can hear her without leaning in. “I give to the fire the great sadness of my ancestors, the abandoned men, who never knew love and felt less than honored by their women, mothers and sisters, daughters and lovers.”
The flames leap higher as the second paper crackles and burns.
She bends to blow into the fire, adding soul, which travels on the breath, to her deep intentions.
When she stands again and turns to face the circle, there is a moment’s hush before we applaud her and celebrate what she has done, because we are amazed. In a fire ceremony like this, people bring many things they wish to release: old habits, fear or guilt, addiction or attachment. She has just sought to release a multigenerational history of stunted lives and toxic relations. Instead of casting out the men who blighted the lives of their women, she has asked to free them, back through the bloodlines, back through time immemorial. She has asked for deep ancestral healing, and she has asked as a woman of power with the right of the priestess to forgive and to intercede.
When we sat quietly together later that night, I asked where she had found those remarkable words. “Kate and Caroline,” she told me. “They were very clear. They had written everything out. They wanted to make sure I got it exactly right.”
She explained that Kate was her Irish great aunt, Caroline her German grandmother. Both were long deceased, but both had come through to her as spirit helpers in the soul recovery work we had been doing with the group. They had helped her recover a desperately sad and lonely six-year-old part of herself, who had been left in a foster home and cruelly separated from the father she loved, without explanation, and then beaten for mentioning him. Though she remembered Caroline as aloof and rigid, this grandmother now appeared as warm and loving, urgently concerned, wanting to assist in healing all the family, across the generations.
We were both filled with gratitude for the help that becomes available when we make ourselves available for soul work. Guided by strong women of her family reaching to her from the other side of death, Irene sought to free the generations of men in her bloodlines who were trapped in powerlessness, sorrow, and addiction. I believe she made a difference that night, bringing light into many lives across time and across dimensions. Her example may inspire us to seek similar healing for our ancestors.

Text adapted from Dreaming the Soul Back Home by Robert Moss. Published by New World Library.