Into the boggart wardrobe: My dream self organizes a journey through fear 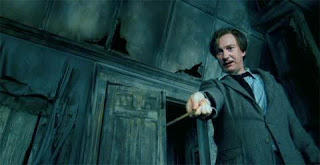 A woman in one of my workshops is resolved to confront her worst fear. She will do this in a conscious shamanic journey, aided by my drumming, with a small group of people accompanying her as her family support. I suggest that they take all the room they need in the space beyond our main circle.
I realize it's time for all of us to make this journey to overcome fear. I direct the rest of our people to form small groups of four, in which everything will center on one person - the one who is resolved to face his or her worst fear - in the next journey.
While people generally sit or lie down for journeying with the drum, a man remains standing, feeling that he needs to confront his fear on his feet. The people in his group stand with him. There are a few individuals who don't partner up. It seems they are nervous and want to stay on the sidelines to see how this goes.
The first woman has an image of her fear. It's come up again and again in recurring dream scenarios. Not everyone is quite so sure of what form their fear will take. I suggest to these others, "You can approach the journey as a Reverse Boggart. In third-year Defense Against the Dark Arts, Professor Lupin gives Harry's class the assignment of confronting a boggart. This is a nasty , shapeshifting creature that takes on the form of your worst fear. In Harry's class, the boggart comes out of a wardrobe. In our exercise, in contrast, we are going to step into the space in which we will encounter our very worst fear.
"Remember that the charm for dealing with a boggart is a Riddikulus spell, which transforms the fear into something funny or preposterous. The most important weapon you'll need to take into the closet is your sense of humor.
"Now picture a huge dark wardrobe rising in front of you. When the drumming begins, you will open the door and step inside. The space within may seem very cramped, or larger than you might have dreamed possible, defying any laws of proportion. The door closes behind you. For a moment, you are in the dark. Now, obscurely, a shape is starting to form. It is assuming the shape of your worst fear. Ready?"

This is an unedited dream report from my journal. I spend far more time leading workshops in my dreams than in regular life.  It seemed the boggart exercise was a big success. I described my first feelings after he dream as "charmed and satisfied." I noted my pleasure at catching another glimpse of how my dream self often seems to go ahead of me, developing techniques I have not yet invented or used.
Why not follow his lead in coming workshops in ordinary reality? Stepping into the wardrobe to find the boggart might require more guts than simply opening the door to let it out. I would need to make sure that whoever was asked to undertake this exercise had the necessary grounding and support. As in the dream, they would want a partner or small intentional family to flank them and help them travel and return safely. Probably I would not want to introduce this test until people had met and confirmed their relationships with helping spirits, especially the power animals.
I checked Professor Lupin's instructions to his class. "Nobody knows what a boggart looks like he he is alone, but when I let him out, he will immediately become what each of us most fears.". The boggart might turn out to be something scarier than one of those hairy, stinky, mud-loving critters in English folklore from which J.K.Rowling borrowed the word, or even a spider the size of an elephant.  Humor, I agreed with the werewolf professor and my dream self, was likely to prove the sovereign remedy. I smiled, noting that among his other distinctions, my dream self has clearly studied the magic of Harry Potter more deeply than I have.

The report of constructing a Reverse Boggart in a dream is from a 2010 journal. I chanced upon it just now. Since then, following the lead of Dream Robert, I have led a version of this exercise at a number of workshops with excellent results. Participants have been amazed to discover the true lineaments of their fears, and that humor and imagination can transform those fears as effectively as a Riddikulus spell.
In the dreams we run away from, leaving them as broken shards of nightmare, we see forms our boggarts have assumed in the past: as spider or tsunami, as the walking dead, a dark double, a possessed elevator. Dream reentry - going back consciously into the dream space, with the clear intention of carrying the action forward to resolution - is my preferred treatment.
Doing a Reverse Boggart requires us to take more of a leap into the dark. We must be prepared to encounter forms of our fears we may never have seen, because we kept our eyes shut tight or because the boggart is wily, trying on successive fright masks.


Image: David Thewlis plays Remus Lupin in "The Prisoner of Azkaban"
Posted by Robert Moss at 6:06 AM

This comment is not about the post. More a question. I enjoy reading your blog and saw another blogpost that relates to your expertise http://www.quinncreative.com/stories-from-the-road/. I wondered if in your extensive travels - especially to much older places - if you have experienced this same phenomena and wanted to write about it?

I don't think my dreams have differed when "on the road" but as with many people I have challenges remembering them, or only remember disjointed episodes. Except for twice when they were memorable and oddly came true in different ways.

Thanks for all you write! Fascinating!

I think it is a common experience for sensitive people to pick up some of the history of what has gone on in rooms they sleep in, in transient environments like hotels or retreat centers. I have had many experiences of this kind.

My worst fear was facing snakes in my dreams, but not anymore. Last couple of times they came to my dreams as a friend and as a healer. Thanks Robert for teaching us to face our fears. Now, I am determined to face the snakes outside of the dreams with the same courage! We will see...

In our simple life, love plays a very specific role. Now we are able to make your love life healthy and no space for any type of trouble. These all are possible with the help of EKPEN TEMPLE OF SOLUTION. He helped me cast a spell that brought my long lost lover back within 48hours who left me for another woman. You can also contact him on EKPENTEMPLE@GMAIL.COM or add him on WHATSAPP +2347050270218 and be happy forever like am now with his experience.