Death of an Oracle and the Oracle that Never Dies 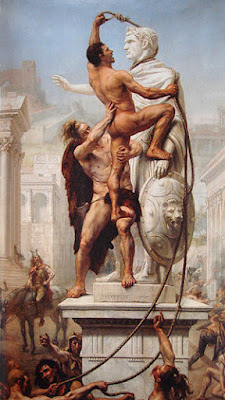 The Sibylline Books were the oldest and most respected oracle of the Romans. According to legend, the original set – in Greek hexameter – were sold to an ancient king of Rome by a wise woman, or sibyl, from the region of Troy. They were replaced several times. Under the Empire, they were moved from the Temple of Jupiter on the Capitoline Hill in Rome to a vault under the temple of Apollo on the Palatine Hill. An august college of secular priests, whose members had typically held high state office, were entrusted with pulling verses from the collection –as you might pull Tarot cards from a deck – to perform a reading.
The Sibylline Books were most often consulted to get a second opinion on an anomalous event, like the flooding of the Tiber or the birth of a two-headed ram, but also to elicit the will of the gods on important undertakings and to receive guidance on what measures the state might need to take to propitiate the powers above.
In 405, the master of Rome was a half-barbarian general named Stilicho who had been fighting a series of savage battles against Alaric and the Goths; Stilicho usually won, but at ruinous price, and without clear resolution. He did not like his ratings from the Sibylline Books, which hinted that he was out of favor with the gods. He did what other men of power have done when they disliked the opinions of diviners and dreamers; he tried to shut them down, in this case by ordering the destruction of the Sybilline Books. Though the Empire was now officially Christian, the culture of Rome was still deeply pagan, and this was widely viewed as an outrageous act of blasphemy that would bring punishment from the old gods.
Soon news reached Rome that barbarian hordes had crossed the Rhine, heading for Italy. A cabal of disgruntled officers overthrew Stilicho; in 408, he was beheaded.. Two years later the Goths sacked Rome. There were many pagans who muttered, I told you so.
Around the same time that Stilicho was destroying the great oracle at Rome, across the Mediterranean, in Cyrene in what is now Libya, a philosopher of noble blood named Synesius – soon to be made a bishop of the Church – completed a treatise On Dreams that argues, from a wealth of personal experience, that dreams are our private oracle and we should never allow anyone to interfere with it.
This oracle is the birthright of every human, regardless of class or condition, and it travels with every dreamer. All that is required to consult it is to lay your head on a pillow – though the results you get will have a lot to do with how you live your life and how you cleanse (or fail to cleanse) your perception.

If we stay at home, the dream oracle stays with us; if we go abroad she accompanies us; she is with us on the field of battle, she is at our side in the city; she labors with us in the fields and barters with us in the market place. The laws of a malicious government cannot stop her. A tyrant cannot prevent us from dreaming, unless he banishes sleep from his kingdom. [The dream oracle] repudiates neither race, nor age, nor condition, nor calling. This zealous prophetess, this wise counselor, is present to everyone, everywhere.

We can choose to ignore this oracle, at our cost, but it can never be destroyed.
I consider Synesius' treatise on dreams to be the best book on the subject before very recent times. He describes how healing, creative inspiration, and exact information on developments remote from us in time or space are all available in dreaming. He insists that dreaming is the birthright of every human, regardless of circumstances, gender or ethnicity. He instructs that we must learn to interpret our own dreams and not give our power away by turning to others to do this.

It would be shameful for those who have lived ten years beyond adolescence to stand in need of any other diviner, shameful that they should not have accumulated an abundant store of technical principles

He explains that we want to keep "books of night and day" recording not only dreams but signs and symbols in everyday life. We will confirm that “all things are signs appearing through all things”
We may find in his situation a distant mirror for our own times. Wherever he looked, darkness was rising. Both halves of the divided Roman Empire were falling into chaos and civil war. Rome, the world city, was sacked for the first time in eight hundred years. He had to lead neighbors and retainers to fight off marauding bands that attacked his city and his country estate. During his three-year embassy to Constantinople, he found himself in a snake pit of intrigue, with lynch mobs and brutal mercenaries in the street (and wrote a roman à clef about it).
Synesius recognized and taught, with clarity and eloquence, that in scary times dreaming can get us through, by preparing us for what lies ahead, by giving us a direct line to sacred powers and by connecting us to the soul's purpose. To practice dream divination, Synesius insisted, is also to "uplift the soul." He wrote that "We ought to seek this branch of knowledge before all else; for it comes from us, is within us, and is the special possession of the soul of each one of us."
He invited us to lift our spirits and our imaginations in the worst of times, by remembering that the soul has wings.

There is nothing that forbids the sleeper from rising from earth and soaring above eagles, to reach a point above the loftiest spheres themselves. He may look down on the earth from far above, and explore lands that are not visible even from the moon. It is in the power of the dreamer to converse with the stars and to meet the hidden powers of the universe.

Quotations are from the Augustine Fitzgerald (trans) Essays and Hymns of Synesius of Cyrene  (1930). Read more about the "bishop of dreams" in The Secret History of Dreaming.

Hi Robert, I am so empowered by your teachings! Last weekend on Sunday my daughter was at the downtown Earth Day fair. She texted me to get over there because there was a booth that offered Oracle Readings. I had never done it before and didn't know what it was about although I have bought a deck of Tarot cards recently and have done some readings. I got over there but after 40 minutes walking every booth and talking to a couple of friends I just couldn't find the Oracle booth. As I was giving up and leaving, right at the edge of the whole fair I caught a lady with a small baby on her back standing behind her booth smiling at me. It is like heaven arranged this because I always turn my head if someone has a baby. the lady asked me to pick a card in her remaining deck of un-picked cards, facing down. The card I got was Sheila Na Gig! The lady talked to me about the card but I was too distracted by the horrible-looking old hag I didn't catch a word of what she was telling me. I got home and did a bunch of research online and started to feel really good. I think it was meant for me to see that card at this time of my life as my heart opens up to welcome the shift that is happening in me...
Thanks!
Wei

Such things are funny. I've been worried about another back surgery and I encountered a guy my age in a wheelchair who gave me a big sunny hello and I thought maybe I should quit worrying and feeling sorry for myself since the guy who can't even walk has a better attitude than me.

welcome to Gclub Casino please join on online
Please click on this post if you wanna paly with online casino.Thank you.