The dreams are coming back 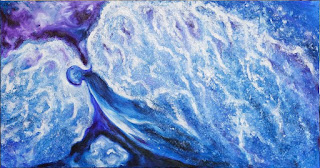 It´s interesting to watch that some auspicious dreams are coming back to us on a collective level even now. Once they were sent to us and left a few precious traces in this world. Later on, when it seems that kindness has almost disappeared, they reappear and inspire us with the same fervour. The Chinese made one of these recurring collective dreams into a beautiful movie, based on the origin of a legendary ceramic statue of Kuan Yin on the island of Putuo Shan. It is available on the net under the name Avalokiteshvara. If we happen to lose the courage to fly high in our best dreams and life, this movie has the power to restore trust in a very gentle way.
Thank you for the inspiring poem.

It seems to have been a series of dreams and visions that led to the transformation of Avalokiteshvara, "The Lord Who Looks Down Upon the World" from a male figure in India into the female image of Kuan Yin in the imagination of China. Of course a bodhisattva is not confined to gender or form.

I don´t know about dreams or visions, though there must have been many. Historically, both male and androgynous Avalokiteshvara are worshipped in China in the 6th and 7th century. Around the year 700 lives the compassionate Chinese princess Miao Shan who is later regarded as Kuan Yin´s embodiment ("the one who sees and hears the cries of the world") and could partially contribute to Avalokiteshvara´s female appearance.
But nearer to our time is the construction of the 18-metre high statue of Kuan Yin on the island of Putuo Shan in 1996.In the day of the consecration of the statue, when the ceremony started, the clouds dispersed and the "window to the heaven" opened. One sunray was falling directly down on the statue, so it seemed to be shining. The climax of that phenomena was at the end, when the clouds around the window formed the figure of Kuan Yin.
It is nice that her compassionate presence is always with us, well, if we allow it.