Dream archaeology among the Dacians 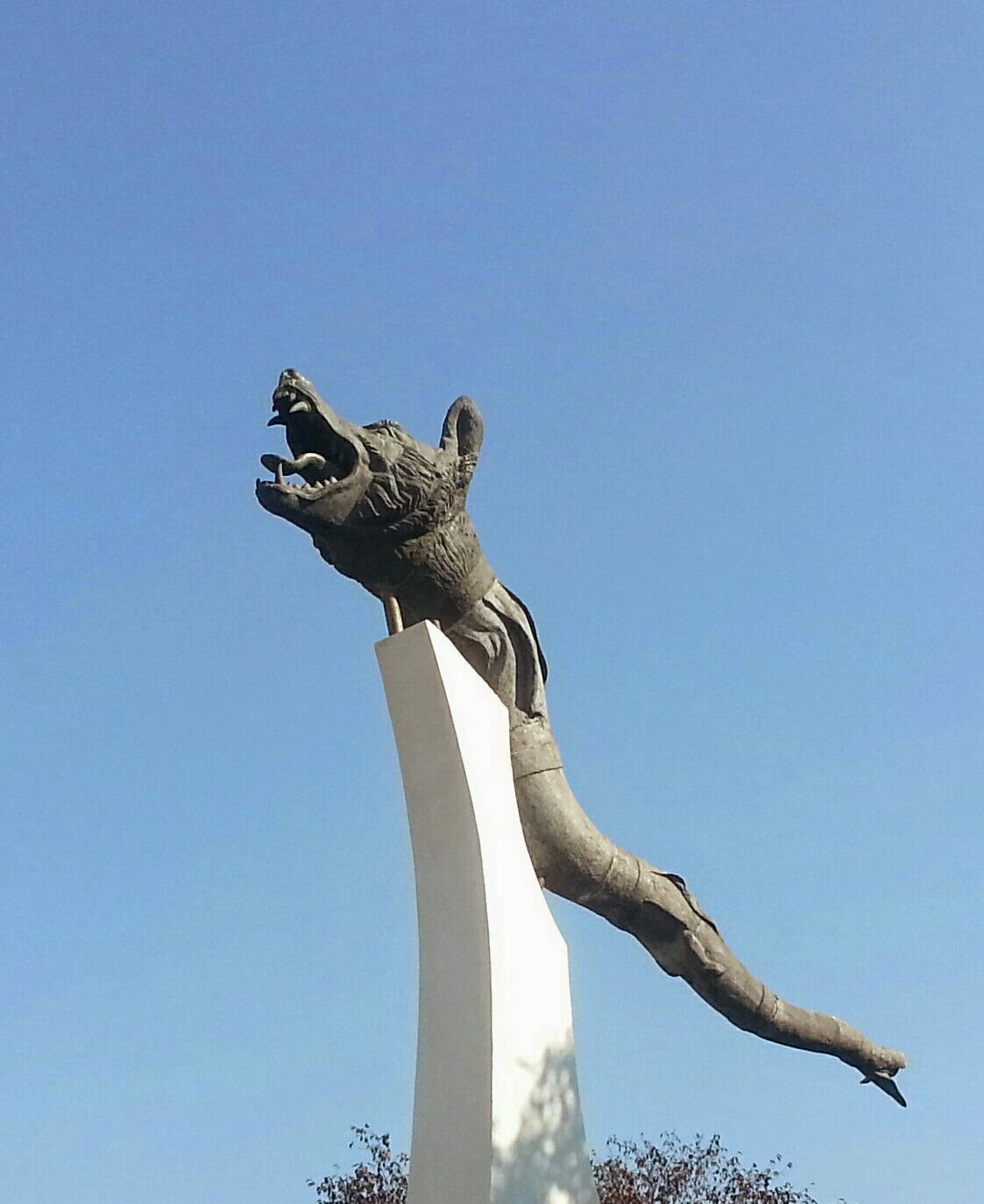 From my Romanian journal

There are deer in the forest. I track them behind closed eyelids. I count three, mostly hidden by evergreens, oaks and lindens. No, not deer. Men, armed for battle, setting an ambush on the steep wooded slopes above the valley where a little river gurgles along its rocky bed.
I see their quarry. A Roman column, marching deep into the mountains to attack Samizegetusa, the capital of the Dacians. The sun glints on helmets, on shields, on body armor.
Breaking from shelter, the Dacians are no longer deer, or men. They are wolves. A standard bearer holds up their war banner. It has the head of a wolf, and the body of a dragon. The wind sighs through the wolf's open mouth. Then it howls. All the Dacians are howling now. Some wear wolf pelts. They have prepared for this, raising their battle frenzy, willing themselves to become werewolves under sun or moon.
They fall on the Romans, hacking through metal and flesh with their terrible sica, a big hand sickle. The Romans buckle and yield. The legionaries are terrified of these mountain savages, their killing tools and their killing frenzy. The wolf howls drown the Roman horns, as the centurions try to get their men into defensive positions. But there is no rout. Many Romans are down, but barked orders bring the survivors into tortoise formation. The legionaries, under their shields, present one great armored back, impervious to the wild men. Spears come through the chinks in the common armor. In the next moment, the Dacians are assailed on their flank by cavalry, Roman auxiliaries recruited in neighboring provinces. This is not a good day for the Dacians, though it began well.

I saw this scene, vividly, while lying in bed in the early morning before driving with friends from a lodge in the Orastie mountains to the ancient Dacian capital of Sarmizegetusa.
I came to the sacred city of the Dacians with other images, and memories. I had dreamed two nights before of a bracelet of wires wrapped like electric cable that could be used for communication as well as decoration. Before my morning vision of battle, I dreamed of a mysterious archaeological find, of something that looked like a simple boat, or canoe, hollowed from bone or wood, that seemed to be a vehicle for transporting souls after death. I carried the memory of a tremendous group journey during my last visit to Romania, a year ago, when we opened a portal to an ancient Temple of Light associated with the mysterious shaman-god of the Dacians, Zalmoxis. I had distant recollections of Mircea Eliade's short book titled Zalmoxis, the Vanishing God.
Yet I came to Sarmizegetusa without expectations. Sometimes the stones speak, sometimes they are silent.
My first glimpse of the sacred precinct, through the trees, was of the remains of the oldest, limestone temple. 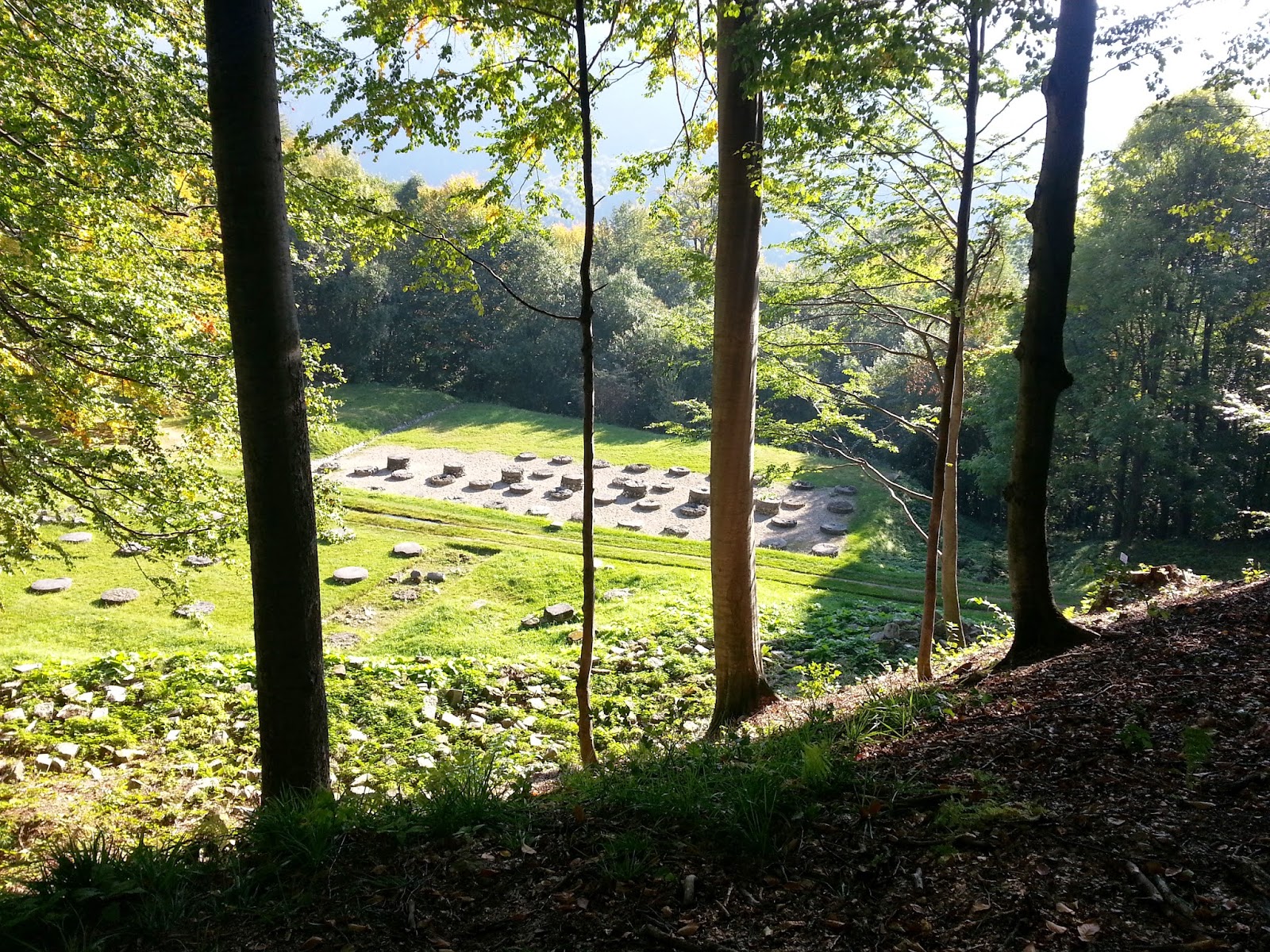 Rounding the edge of the hollow ground, I sat on a bench and let myself slip across the centuries into scenes of  another time. I was surprised to find myself briefly joining the perspective of a Roman officer named Marius, who had served the emperor Trajan since his time in Spain. This Marius had been tasked by the emperor to report, after the fall of Sarmizegetusa, on the religious practices of the Dacians and on how they managed to maintain speedy communications in such a broken country of foresta nd mountains.
This was interesting, but not what I had come for. A small group of tourists disappeared. My Romanian friends and I had the site to ourselves, and tolerant custodians allowed me to drum by a wonderful tree, turned golden in the early fall. I instantly saw a she-wolf. I found myself in the presence of an ancient woman of power, a priestess and leader of the wolf people, and a man in a bear skin leading corresponding rituals for the people of the bear. It seemed that three animals were of special importance to the Dacians - the wolf, the bear and eagle - and that they had a clan system in which each clan had special powers and functions. The bear clan had special responsibilities for medicine, and carried the aegis of Zalmoxis. The wolf clan produced fierce warriors, yet its leader, the alpha, was female.
But where was the Temple of Light, and those fountains of healing colors?
The clue that we may not have missed it completely was in a strange photograph taken by my friend Ana Maria Stefanescu. That fountain is no ordinary trick of refracted sunlight. 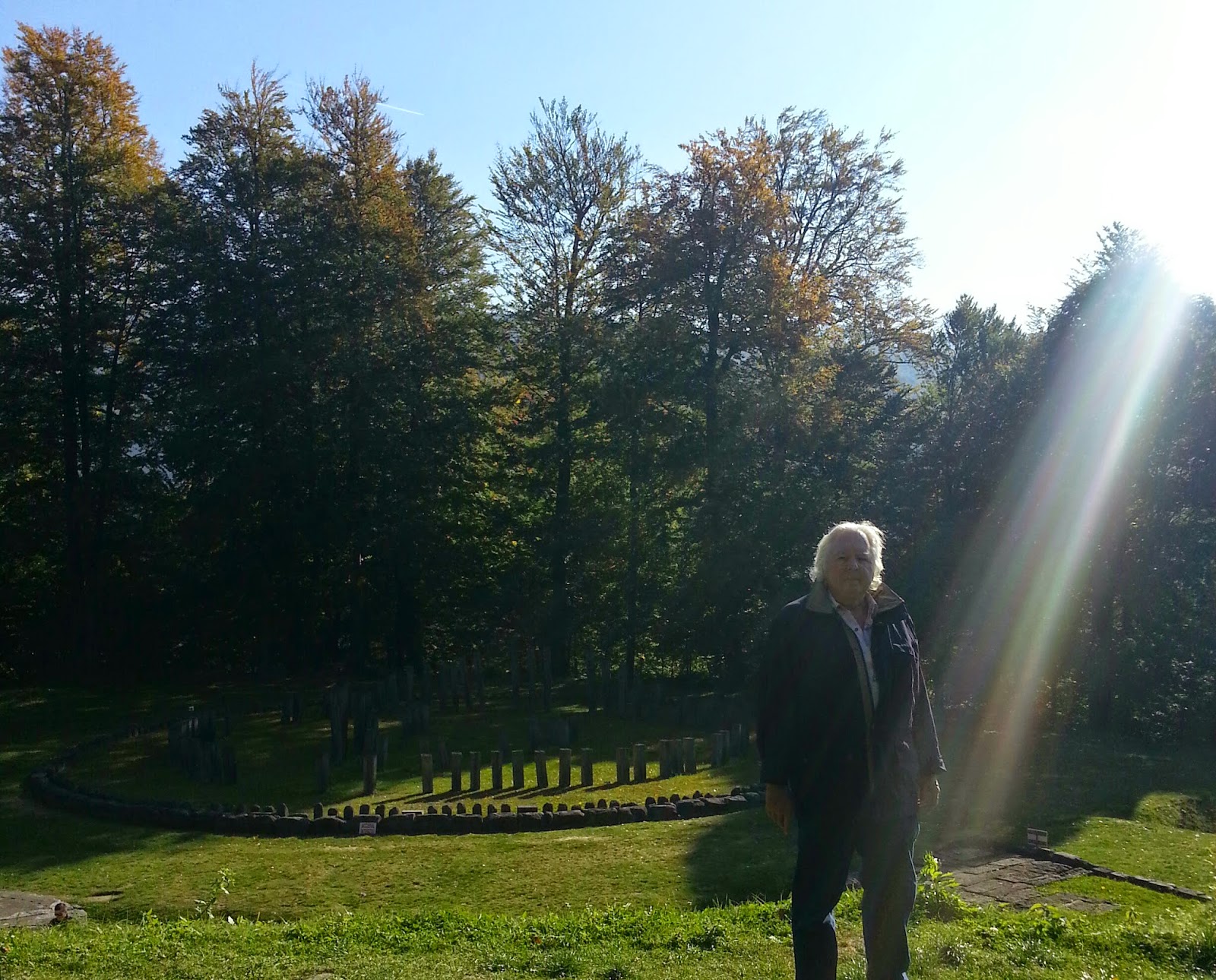 Two days later, at the National History Museum in Bucharest, I paused at the statue on the steps, of Trajan gripping the Dacian she-wolf. 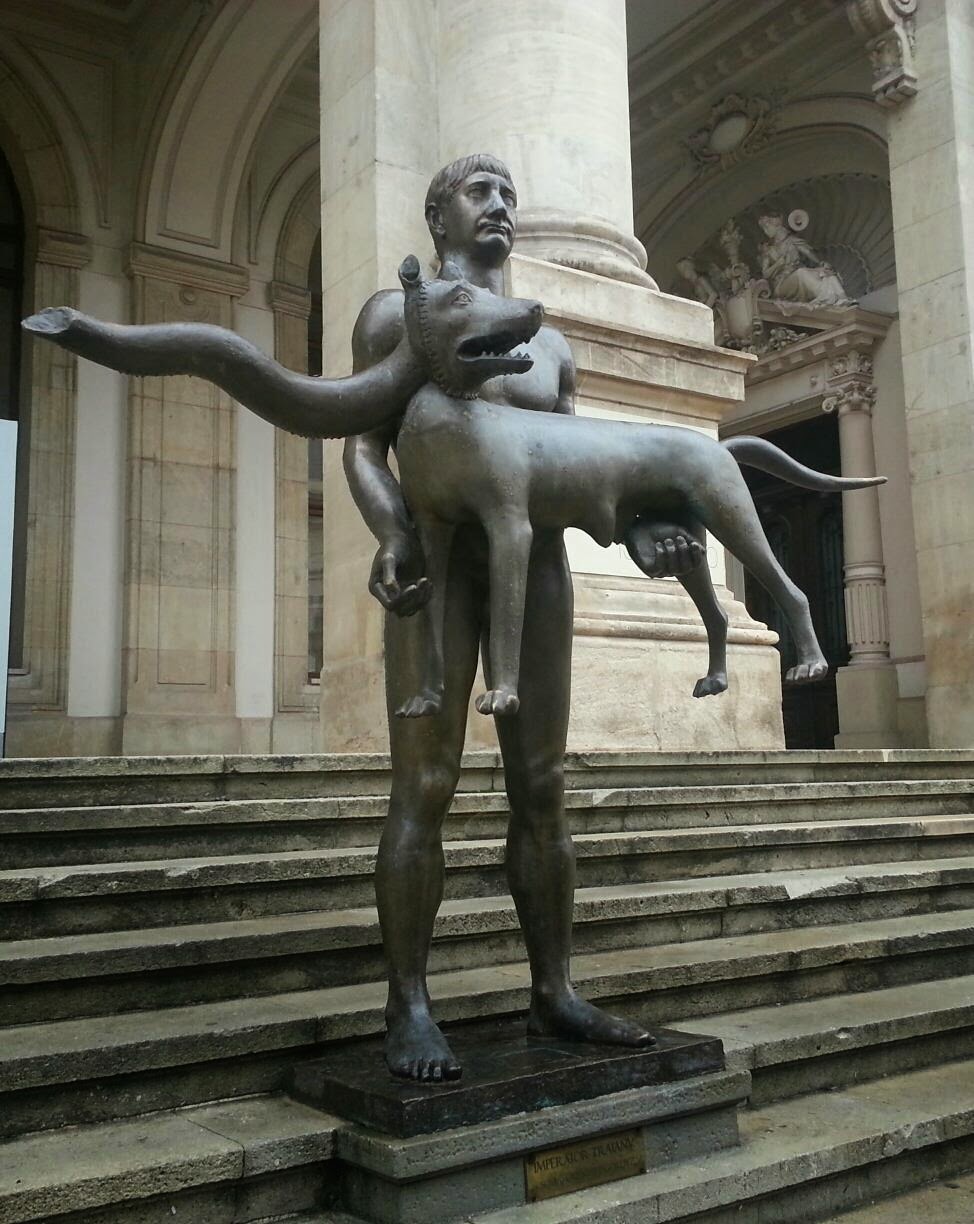 Inside, I tracked my dreams and impressions among reliefs reproduced from the infamous column of Trajan in Rome, a giant monument devoted to the emperor's conquest of the Dacians. I found Romans apparently raising a "tortoise" with their shields. 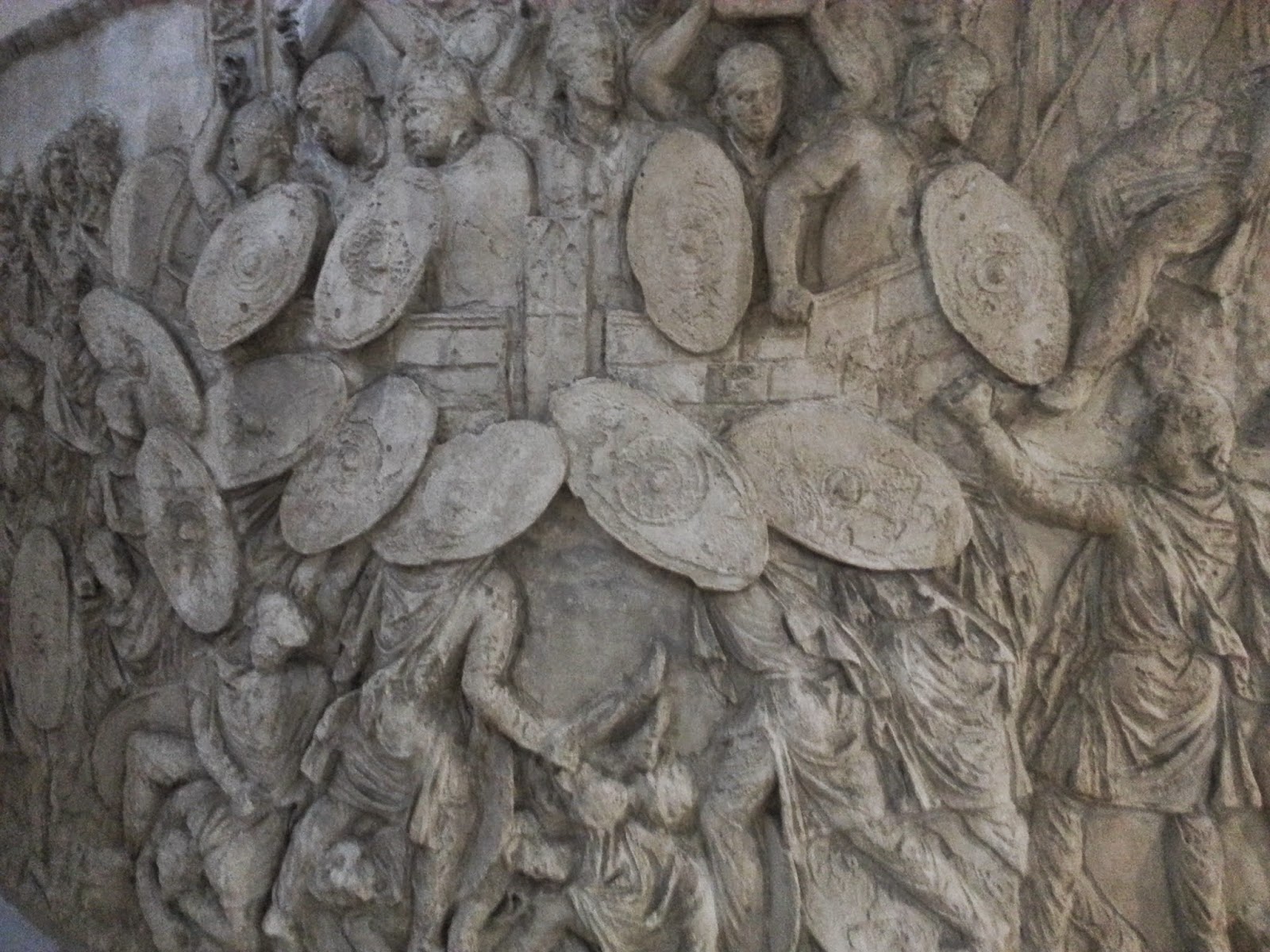 Other reliefs depict Roman auxiliary cavalry drawn from many provinces of the empire. There are even two scenes of Moorish cavalry fighting for the Romans against the Dacians, who were contending with an empire encompassing much of the known world. I was drawn to one of the few reliefs depicting a woman. It shows a Dacian "priestess" being yielded to Trajan. She is tentatively identified as the sister of the Dacian king, Decebalus, who was  driven to suicide by the Romans. 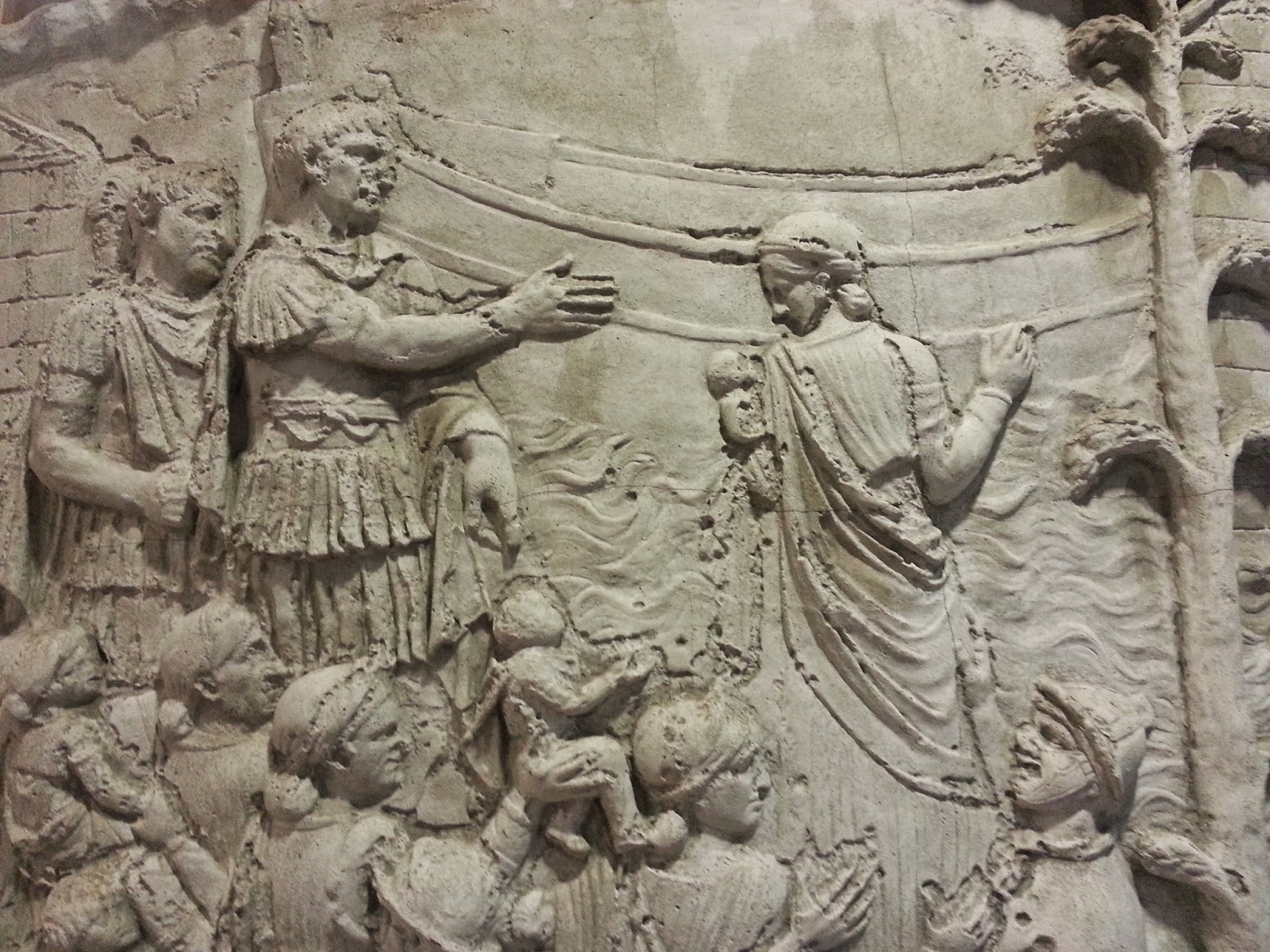 In the treasury at the museum, I found gold bracelets like the one in my dream. Can they really have played some role in communication? 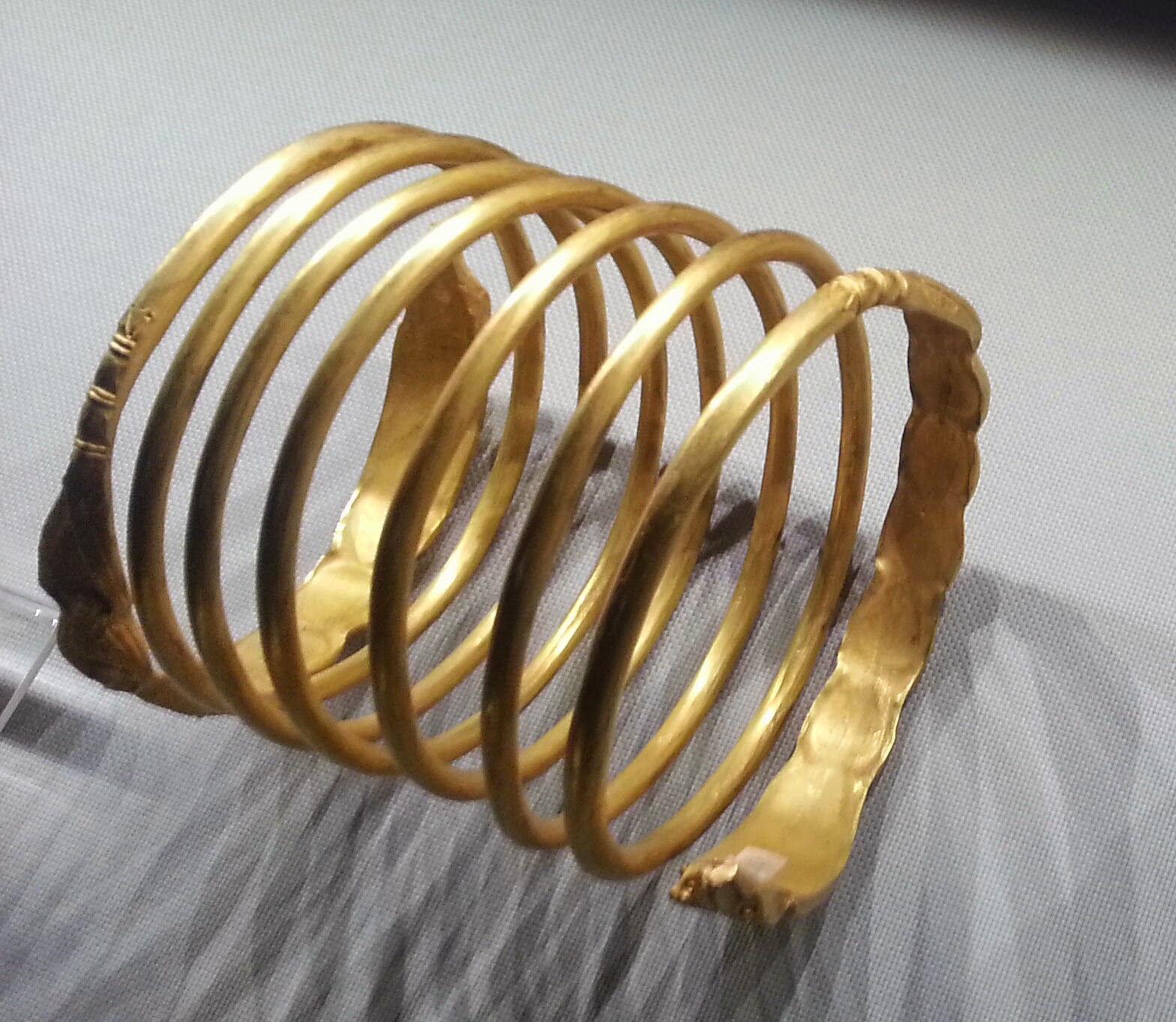 A little checking confirmed that Trajan served as legate in Spain, in the Roman province of Hispania Narbonnensis. Could I really have picked up a mental trace of a literate Roman officer who had served him there and continued as a confidant and adviser?
Plenty of leads for further dream archaeology. Meanwhile, I learned at the museum that fresh excavation at Sarmizegetusa has been authorized, so there may be new finds to be considered, surviving the Roman efforts to destroy all traces of a great and - to moderns - quite mysterious ancient civilization.

Photo of RM with fountain of light by Ana Maria Stefanescu. All other photos (c) Robert Moss