Notice what's showing through the slip 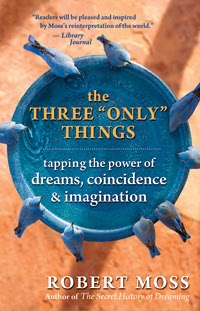 It's one of the cardinal rules for navigating through synchronicity: notice what's showing through the slip. Following that rule, I found a dream editor, and the wonderful publishing house that has brought five of my books on dreaming and shamanism (so far) to the world.
Here's the story:

I had just done devoted an hour on my radio show to the theme of “three 'only' things", the notion that we have three wonderful resources for guidance and everyday magic that we tend to dismiss as "only" this or that, by saying (for example) that a dream is "only" a dream, or that a moment when the universe gets personal is "only" coincidence, or that a flash of inspiration is "only" imagination.
The show went very well, and I had a strong urge to reach out to someone in publishing immediately and propose a book on this theme. When I picked up the phone, I intended to call a senior editor at a major New York publishing house with whom I had worked before. On a sudden instinct, I looked up the number for an editor with a smaller house on the West Coast.
Her name was Georgia Hughes, and she was the editorial director for New World Library, an independent publisher based in Novato, California. Up to this point, I had communicated with Georgia only by letter and email. First contact was made when she approached me for an endorsement of a fine book on Celtic tradition, Frank MacEowen’s The Mist-Filled Path. Later I had emailed Georgia to advocate Wanda Burch’s beautiful book She Who Dreams.
I did recall a dream from many years before in which it seemed that a woman called “Georgia” — who appeared in an American Indian setting but was not herself Native American — was playing a very important and positive role in my publishing life.    I found the number for New World Library. A robot voice guided me through the in-house directory, which eventually revealed Georgia’s extension. I punched it in, expecting to get voicemail. After all, she was the editorial director of the house, and such people tend to be very busy and not often — if ever — available to first-time callers.
Georgia answered her own phone and greeted me warmly when I said my name. She spoke to me as if we were old friends, referring to a recent phone conversation.
“Excuse me,” I interrupted, puzzled. “We’ve never spoken on the phone, though we did trade some pleasant emails.”
“Of course we’ve talked on the phone. You told me about your vacation.”
“Do you know who this is?”
“Absolutely! You’re Robert Moss. You’re the author we are publishing.”
“That is amazing. I’m calling to discuss a book you may want to publish, but in my reality you haven’t even heard about it yet.”
There was a short pause on the phone, then Georgia realized she had confused me with another author, Richard Moss.
I refused to hear her apology. “There are Freudian slips and then there are cosmic slips, and I love what this slip may be telling us. I’m calling to explore whether you might want to publish a book that involves coincidence — including how we can get guidance from slips and apparent screw-ups. And you start our conversation by telling me you know absolutely who I am and that I am the author you are publishing. What could be cooler than that?”
We had a lively conversation about dreams and coincidence for half an hour, at the end of which time I promised to send Georgia a formal proposal the next day. I stayed up all night to pull it together. The time is always Now. Could you resist going with a slip like that?

The book that resulted was, of course, The Three "Only" Things: Tapping the Power of Dreams, Coincidence and Imagination and I tell this story of the everyday magic by which the author-editor connection was made in the Acknowledgments. I continue to be enormously grateful for Georgia's slip on the phone, and for her extraordinary gifts as editor and friend.
Posted by Robert Moss at 5:51 PM

You get the sense (or at least i do) that The Universe is always creating openings for us. Whether they are ways "out" of our current situation, or ways "up" to the next level of being, or just little passages to new ways of thinking. It certainly keeps Life interesting!