Time Road to the Stars 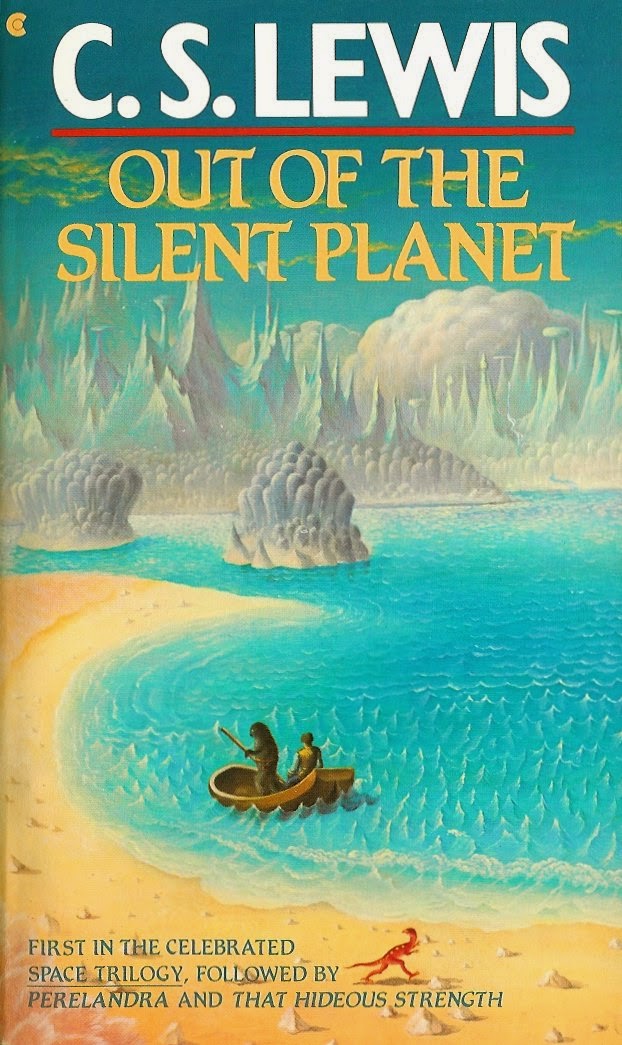 C.S. Lewis's novel of Malacandra, Out of the Silent Planet, describes a journey in a spaceship to another planet by three humans - one driven by greed, one by darker ambitions to make humans the predatory master species in the universe, the third a thoughtful, attractive adventurer called Ransom, who is a professor of philology. They enter a world quite unlike the Earth, where three quite different intelligent species are able to coexist without conflict, and everything is ordered by the benign rule of a godlike being called Oyarsa, whose messengers and assistants are the radiant eldila.
In Malacandra, we learn that Earth is known as "the silent planet". Contact between Earth and other planets has been cut off because Earth has fallen under the sway of the Bent One, a dark overlord. Unknown to humans, the eldils still travel to Earth, but it's become a dangerous journey and they go down like warrior angels, concealed from the perception of most humans.
Lewis adds a postcript to the novel that purports to be a letter to the author from "the original of Dr Ransom", an acquaintance on whom the Ransom character is based. Supposedly their friendship began when Lewis - a medievalist - found a twelfth century account of a voyage through the heavens that introduced a being there called Oyarses, "the intelligence or tutelary spirit of a planet".In a nonfiction book, The Discarded Image, that Lewis published late in life, he discusses the 12th century Platonist, Bernardus Silvestris - "Bernard of the Woods" - who wrote about a journey out of this world and planetary gods he called Oyarses.
There are more clues to Lewis' evolving thinking about how we can open and maintain communication with the intelligences of other star systems in the patrial draft of a late novel he did not intend to publish. Lewis's former secretary narrowly managed to save this from a bonfire on which the author's brother was burning his manuscripts shortly after his death. This unfinished novel, titled "The Dark Tower" by the editor, involves time travel. The editor suggests it is the true sequel to Out of the Silent Planet.l
In the postcript to Out of the Silent Planet Lewis made the fascinating suggestion that time travel will be the key to travel to intelligent life on other planets.The last sentence in that postscript reads as follows: "The way to the planets lies through the past; if there is to be any more space-traveling, it will have to be time-traveling as well."
The heart of the matter (as Lewis also came to believe) is that given the Cloaking of Earth, the best and safest way to reopen communication with benign intelligences on other planets and in other dimensions may be to go across time and take off from a past - or future - location. After leading many group journeys by flights of intrepid shamanic dream travelers (following the "Sirius" script I published in Dreamgates, and others) I believe he was correct.

What a fascinating conception! This is a nice tribute to a great and highly original work - one of my favorite sci-fi books, hands down. I've often thought that communion with any form of extraterrestrial life will become more feasible for us once we've grown, collectively, to the point where we can meet in a spirit of mutual sharing rather than in a dynamic of either fear or need.

I woke this morning from a dream of being on a team of time-shifters escaping a set of barriers and homogeneous opponents trying to trap us in standing wave patterns. I wondered what echoes of this I might see today and I was delighted to see this post about Malacandra, the planet of the best of the so-called "space" trilogy. All worth a read, I must add.

I first read them back when I was a poor student and spent my free time devouring out of print novels at the library and wandering the shelves to find curious things I might never have thought of searching out. It was at this time that I discovered the obscure and stunning David Lindsay novel, "A Voyage to Arcturus", which seems to be related, at least in my mind, to these books.

And it also reminds me of Doris Lessing's Skikasta novels, which have a strong eschatological feel, a flavor I often find too overwhelming, but in these novels I don't mind so much as she builds a complex interweaving of realities and powers beyond the Earth that, nevertheless have connections to our lives and our struggles. All of these themes have been popping up lately.

My own imaginal efforts of late have been oriented toward the distant past and to what lies beyond the orbit of Earth, both seem to require overcoming some barriers, so I find these resonances encouraging. I've not thought of combining the two paths, so this is a great new idea for investigation! I'm looking forward to following up. Thanks!

Fran - I love the first 100 pages or so of Doris Lessing's "Shikasta", and quoted it in my book "Dreamgates". However, I must confess that in several readings I have never been able to get beyond those first 100 pages.

I'll have to take a new look at it and try the first 100 pages, I haven't read it for at least 15 years. Actually, I'm more inspired to have a go at the "space" trilogy, there is something about Lewis that draws me back. Having a look at the book today I find that Ransom is a philologist and it only occurs to me that the story might have something to do with Tolkien. Interesting stuff, thanks for jogging my thinking, Robert.

Fran - To quote myself:

n one of his letters, J.R.R. Tolkien reports that he once made a bet with C.S. Lewis that led to a grand (but unfulfilled) literary project and what became a lifelong inquiry into the nature of time. The two great scholars and fantasy writers "tossed" to decide which of them would write a fantasy epic centered on adventures in space, and which would write a parallel epic devoted to adventures in time. Lewis got the assignment in space, and proceeded to produce the magnificent Space Trilogy of adult fantasy novels. Tolkien got the assignment in time, which he would certainly have chosen for himself, since he was always fascinated by the possibility of time travel and of slipping into the Other Time of Faerie. But Tolkien never produced his Time Trilogy. You can read more here:http://mossdreams.blogspot.com/2011/01/tolkiens-wager-with-time.html