The Book of Raziel 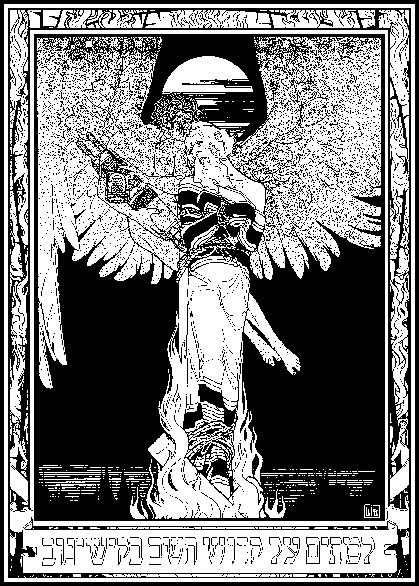 One of the neverending stories is about an ultimate book of secrets, a book containing all the secrets of the universe and the record of everything that has happened and can ever happen to human beings. All celestial and all earthly knowledge is recorded here.

In Jewish legend, it is said that Raziel, the archangel of the Mysteries whose name means “The Secret of God” gave such a book to Adam when he was living in the Garden of Eden. By means of this book, Adam was able to master the seventy-two branches of wisdom and gain entry to celestial mysteries that were hidden even from the higher ranks of angels and archangels. According to the Zohar, the mighty angel Hadarniel told Adam: “You now possess treasures of the Lord that are unknown even to those who live in the heavens.”

It is the book out of which all things worth knowing can be learned, and all mysteries, and it teaches also how to call upon the angels and make them appear before men and answer all their questions. But not all alike can use the book, only he who is wise and God-fearing and resorts to it in holiness.

Some say the book “flew away” when Adam and Eve committed their transgression.
Others say that many of the angels were jealous that such powerful knowledge had been entrusted to the first human. The jealous angels stole the book and hurled it into the depths of the sea. To retrieve the book, God had to enlist the help of a primordial power of the deep: Rahab, the angel of the sea.
From time to time, two of the archangels who are friendly to man – Raphael and Raziel – have shared the book with humans.
After the fall, Adam repents and prays for God’s compassion. He asks for knowledge of the future Raziel comes to him when he has been praying for three days on the bank of a river that flows out of Paradise. Raziel tells him he will give him a sacred book that will give him and his descendants knowledge of things to come “if they will but read this book in purity, with a devout heart and a humble mind, and obey its precepts.”
Adam is so terrified when Raziel starts reading from this book that he falls on the ground shaking. The archangel tells him to get up and brave up. “Be of good courage, be not afraid, take the book from me and keep it. Learn from it and become wise, and you will teach its contents to all who are found worthy of knowing what it contains.” When Adam accepts the book, ‘a flame of fire” whooshes up from the river bank, and Raziel soars heavenward with it, leaving Adam in no doubt about the nature of his visitor.
After the death of Adam, according to one tradition, the book disappeared. The cave where it was hidden was revealed to Enoch in a dream. It was from this book that Enoch derived his wisdom and the maps he used in his otherworld journeys. He committed to the book to memory and returned it to its hiding-place.
Since then it has come into the possession of exceptional humans in the way of Adam or the way of Enoch: through direct transmission by an angelic visitor, or through dream revelation. (Often the two are closely related.) When God decided to send the great flood, he despatched the archangel Raphael to Noah with the book. From it Noah learned how to construct the ark. The book Noah received was made of sapphires. When he took it on board the ark, it served him as a timepiece, allowing him to distinguish night from day. From Noah, it descended to Shem and then to Abraham. It turns up again in the hands of Solomon, “who learned all his wisdom from it, and his skill in the healing art, and also his mastery over the demons.”
In the middle ages, a number of manuals of angel magic and occult lore circulated among a discriminating (or less-than-discriminating) clientele under the title of Sefer Raziel, the Book of Raziel. A number of these works survive in the British Library. They seem heavily tainted by the Faustian desire to wield secret power for its own sake. I have the feeling that Raziel would like to dissociate his name from the schools of sorcery and recall us to a higher path of knowledge.
The descriptions of the book as “made of sapphires” and lighting up Noah’s ark are glimpses into hyperreality, for a book that contains the secrets of the cosmos is clearly no ordinary book. It may be related to the “painted curtain” on which all souls are depicted, that was shown to Adam according to the Zohar. It is surely related to books we discover, like Enoch, in dreams.

Quotations without other attribution are from Louis Ginzberg, The Legends of the Jews. 7 vols. Baltimore: Johns Hopkins University Press, 1998. Ginzberg is the indispensable source on Jewish angelology.

Graphic: illustration from one of the manuals of magic titled Sefer Raziel, not to be confused with the Book of Raziel of the higher tradition.
Posted by Robert Moss at 12:12 AM

A very thought-provoking nutshell history of Sefer Raziel lore. Thank you for that.

However, I have a bone to pick with you, my dear Professor Moss! It is very unlike you, as broad-minded and tolerant as you usually are, to take a cheap swipe at medieval magicians. I think you should know better, and in your more enlightened moments I think you would.

Although there were among the ranks of "sorcerers" that you give such short shrift exactly the type of power-hungry, stunted human beings you make reference to, I would wager to say that the majority of them were actually closer to you in their aims and desires than they were to old Faust. Sorcery isn't evil, in and of itself. It all depends on what ends one uses it towards. Don't forget that a number of spells in old grimoires were for obtaining prophetic dreams.

And I also think there is a big crossover between what you are pursuing and the aims of contemporary magicians, as well. And I know for a fact that there are several contemporary magicians among the followers of your blog. Dreamwork has also been an important element of my magic for decades.

It seems obvious to me that the "book" of Raziel was never a book, but rather a, shall we say, "nexus" of knowledge to be found through attuning to a particular state of consciousness that the Hebrews and subsequent followers of the Abrahamic religions call an "angel". So the medieval grimoires obviously have just as little to do with the original "book" of Raziel as the Key of Solomon has to do with King Solomon (considering that the lore in the Key has been identified as Greek and Helenistic in origins).

Nonetheless, despite your careless slip into needless "sorcerer bashing", I will remain a fan of your work. I like the fact that you are solidly based in historical knowledge and tradition, and use that as a springboard for creative leaps.

Dear Scribbler - Thanks for your elegant defense of the grimoires. This is the first time I have been accused of "sorcerer-bashing" and I see I must avoid giving the impression of bashing any group of seekers. I hope we can agree that it is appropriate to practice discernment in these matters and not confuse goetic magic with higher paths.

A fascinating discussion and great visual journey into the imagination. I saw this brief history unfolding in my mind like a magical picture book as I read your words.

Where does the Book of Raphael fit into all of this? I read in an Israel Regardie book that it was a profound Cabalistic text that has not yet been translated into English. When my friend Julian went to Jerusalem I half heartedly asked him to find me a copy. I was quite suprised when he returned with one. While I know the Hebrew letters, I don't know enough to actually read it. It came with a very small version of itself that one is supposed to put under ones pillow while sleeping. I suppose for a type of dream incubation.

Also thanks for the Ginzberg tip. I hope to learn more about Herochiel from him.

Justin - I have seen references to a Sefer Raphael, but am not familiar with the contents and am on the road and can't consult the invaluable Ginzberg on this right now. I know that a Sefer Raphael was published in Lodz in 1907.

Wanda - Thank you. It may be interesting to attempt a group journey in quest of more direct information on some of these things.

I found this a fascinating read Robert (after I stopped being hung up on the confusing possibility that a book containing knowledge of all things might have flown off because its keeper chose to eat from the tree of knowledge; but I'm no bible scholar... I'm probably missing something obvious). Thank you for expanding my mind and imagination as your writings so often do!

A duende, a spirit came toward me. He asked me a strange question: "But what do you wish to become, you, Maria Sabrina?" I answered him, without knowing, that I wished to become a saint. Then the spirit smiled, and immediately he had in his hands something that he did not have before, and it was a big Book with many written pages. "Here," he said, "I am giving you this Book so that you can do your work better and help people who need help and know the secrets of the world where everything is known." I thumbed through the leaves of the Book many written pages, and I thought that unfortunately I did not know how to read. I had never learned and therefore that would not have been any use to me. Suddenly I realized I was reading and understood all that was written in the Book and that I became as though richer, wiser, and that in one moment I learned millions of things. I learned and learned.

An evocative piece! As I read this post I immediately thought about possible group journeys of exploration. Some preliminary clearing or cleansing work could help a group to go deeper into this imaginal realm.

Nina - I wonder whether Meyrick's "minium" corresponds to the "cinnabar" of the ancient China Taoist accounts of travels to a higher realm, the cinnabar heaven, from which wisdom texts descend to earth. Meyrinck is indeed an enigmatic writer. I dipped into his work some years ago; you have inspired me to pull his books off my shelves and look again.