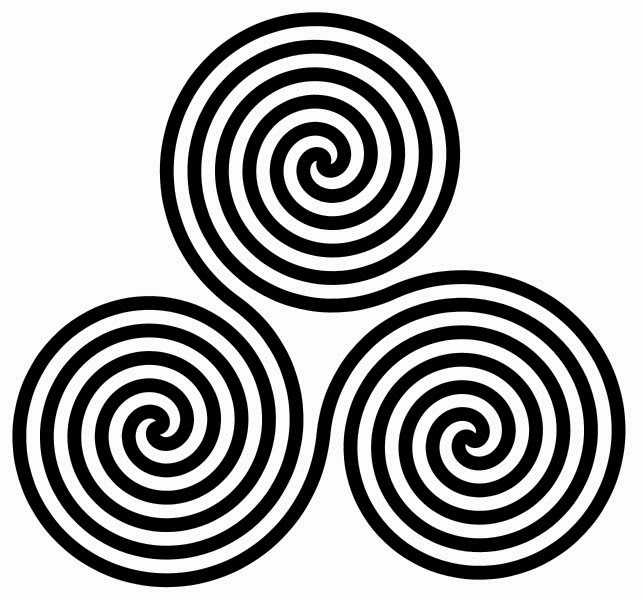 I was working on a revised draft of an account of a journey I made into the country of the Scottish Merlin, around Hart Fell ("Deer Mountain") in the Western Borders. The last words I typed, from a voice I heard on that mountain, by the rust-red chalybeate spring, were: -

Follow the Rule of Three.
Everything that matters will come in threes.

I printed out my draft, and grabbed for a three-ring binder on a shelf at my right hand, to give it temporary shelter. A different binder fell out. It was one I had quite forgotten. I had given it the title "The Celtic Otherworld" and embellished this with the image of a triskele, the Celtic triple spiral. Naturally I picked up this binder, full of old notes from my studies of the immrama - the "voyage tales" of Celtic otherworldly journeys - on my desk for new inspection.
As I moved, my shoulder brushed an upper shelf in the same bookcase, and three index cards fluttered to the floor. The writing on the cards was by three different hands, none of them was my own. Though I did not recognize the handwriting, the cards, in themselves, were no mystery. They were three of the hundreds of cards I've collected playing my Coincidence Card Games with people in my workshops.
In the simplest, oracular version of the Coincidence Game, the members of a circle are asked to write anything they like on one side of a small index card. The cards are made into a deck. Then we all get to pull a card at random from this one-time deck, and we are required to pretend that whatver we find written on it is a direct message to us from the universe, manifested through the magic of synchronicity. Sometimes we formulate a life question - a theme on which we would like some help or guidance - before pulling our cards. Sometimes we are simply open to what the cards have to say.
Well, of course I had to read the three cards that seemed to have thrust themselves into my field of attention. I had drawn them on three different occasions, at some point in my past, but had no exact recollection of what was at issue then.
I now read the cards in the order they had fallen. The first was written in three lines, like this:

The second card had a title:

2. Synchronicity:In dream session, I asked for information about my sore shoulder. One of the responses was to "open" my shoulder. I saw two road signs last night: "Shoulder work ahead" and "Shoulder closed".
-
The third card left me in no doubt that there was "news" for me tonight:

3. Wind blown newspapers on the front lawn
The writer of the third card had added a little drawing of a wavy, breezy line with twin arrowheads, at either end.

I had been about to take a break, but I needed to take just a quick peek at the contents of that binder with the triple spiral on the cover. I opened it at random and found myself in the midst of a bardic narration, with these lines in my direct line of sight:

There are three times fifty distant isles
In the ocean to nthe west of us
Larger than Erin twice
Is each of them, or thrice-
A glimpse of the mystical Western Isles, in Kuno Meyer's translation of the Immram Brain meic Febuil ("The Voyage of Bran Son of Febuil"). There's the Rule of Three again.
---Life rhymes. Tonight, my life is rhyming (to go Dantesque for a moment) in terza rima.
Posted by Robert Moss at 12:36 AM

Hmm... three words from my shelf elf: Three.Only.Things. A personal superstition since I discovered that carrying TOT has the power to deliver instant fly-by answers to life's pressing questions -- such as what to bring to Rosh Hashanah dinner, or what was the title of that book on East European goddess culture, or where did that red wrench go, or is there really such a thing as a thousand dollar bill (the answer came free; actual bank note sold separately). I am struck by the wind blown newspapers that seem to relate (if this were my index card) to the pages in my door "flapping gently in the wind" in preparation for flight as shared on a recent online forum fragment. If the answer is blowing in the wind I may be getting ready to catch it soon. And the third time maybe on my actual front lawn...

Ah yes, Savannah. Thee Only Things. The perferct reference fro this author's point of view, of course. I'm glad that it's proving fun and useful as an oracle book.

Thanks for remnding me of my recent dream - thin in content but rich in feeling - of pages of a printed book blowing in the wind at my door, as if ready for flight. That is very much how the pages slipping from my printer felt to me, in the depths of the night. Stay tuned for more adventures with the shelf elf on thsi blog, soon.

Robert,
The first thing I thought of when I read the title of this thread is the new year 2010: 2+0+1+0=3. As a tarot scholar, this tells me it will be an Empress (3rd trump) year. Love with wisdom to you!
Nancy

Aha, that takes the Rule of Three to an even deeper level for now (as Celts know as well or better than anyone) we are now in the realm of the Threefold Goddess. Thanks, Nancy!

I have probably a rather mundane connection with a Rule of Three. When something either:
A. Goes wrong in my household, usually a piece of equipment, like a washing machine breaking, two other things also break before the "spell" of things breaking has passed.
Or
B. Good things happen in abundance in that same domestic Rule of Three. I will receive more money in a paycheck, hear good news, or something special happens, all in the course of a day or several days.

Having been participating in the wonderful dream forum run by yourself along with Spirituality and Health Magazine for just over a year now,I have been collecting the titles of the thousands of dreams that have been submitted. The dream headers are by and large just so quirky and cover such a diverse range of topics. Quirky, elusive and poetic are 3 words that are formost in my mind, all nicely bound up in a nice nutshell of a sentence.I have written each dream title onto a tiny slip of paper half the size of a business card, and keep them all together in a basket on my desk.
Being a bit of an oracle junkie I can honestly say that I find this little dream title oracle one of my all time favourites. Sometimes I pick a series of cards and lay them out in sequence to form a story which as you can imagine usually turns out to be most curious and revealing.
Changing the subject somewhat; Your mention of opening your shoulder reminded me of the healing sessions that I had with a teacher of the Alexander Technique. At it's core it is mainly focused on releasing and opening those parts of the body where we hold tension so that they can reorientate themselves back into their natural alignment. My experience with the technique not only taught me how to correct and prevent injury; it also brought up a huge amount of emotional stuff to do with pain memory from the past stored in the affected muscles.

Wanda - Your terza rima in the incidents of everyday life reminds me of that grand old principle of practical magic, "three times makes the charm"

Nicola, I like your description of the Dream Title Oracle you have improvises. We certainly have grand material in all the dream titles (and the stories that go with them) in our very lively interactive forum at S&H, where the creativity of our global online community keeps growing and growing. I also like your story game with dream titles. I've tried that - and taught others to do it - with both Tarot and the I Ching, but here we have something entirely fresh and spontaneous, not penned in hand-me-down interpretations, and without numerical limits to the number of images and patterns.

Many of us have observed how life burdens can be held in the body. I should clarify that the bit about ths shoulder was on an index card someone else had written, and did not reflect any condition I've personally experienced in the body, though the metaphor of "shouldering" something (and checking whether you are "open" or "closed" to shouldering more) does speak to me.