Reincidence and the Triple Goddess 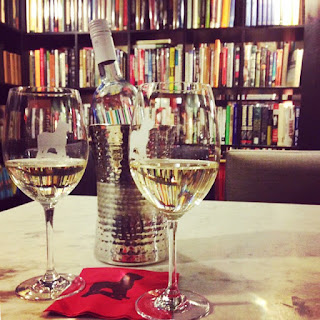 I invented a new word for a run of coincidence: reincidence. While the words "coincidence" and "synchronicity" define a meaningful conjunction of an outer event and an inner sense of significance in a given moment of time, "reincidence" describes a sequence of conjunctions of the same kind, playing out over time. For example, you might dream of a flamingo, or see one on the side of a van, and then it's flamingos all over - on a suburban lawn, on a beer coaster, in the description of staff officers (with red stripes on their pants) in a thriller set in World War II, on a baby blanket.
The following sequence, mostly played out in Asheville, North Carolina, shows how reincidence runs:

April 15, 2010 - In Asheville, NC there is a big crowd at Malaprops bookshop for my talk and signing. A woman asks me about the significance of the number 3 in the title of my book The Three"Only" Things. I give her a bit of a lecture about three as the Celtic number, the number of the Trinity and of the Triple Goddess and the Three Fates, ending with the statement, "Three times makes the charm".

April 16, 2010 - I wake from a dream feeling super-charged, with a shimmer of possibility all about me. I have learned to associate this shimmer with the play of numinous forces. In my dream, taking giant steps across a beautiful landscape, I feel that each step I take is being taken in more than one world, and is bringing worlds together. I notice three red haired women walking together up the slope towards me. They move so close together that their bodies appear to be joined, and I notice their heads are all enclosed by a single hood. Am I looking at the Triple Goddess? I have seen them before, going a different way. They look at me with intent interest and I feel a stir of excitement that they are in the field.

April 16, 2010, afternoon -  I sip a glass of wine at a civilized establishment, the beautiful. dog-friendly Battery Park Book Exchange & Champagne Bar, and admire the griffins that guard the entrance of The Grove Arcade across the street. Three women, two of them redheads, the third a blonde, take the next table. In jolly mood, sipping margaritas, they strike up conversation with me and prove to be very interested in dreams. I say to the blonde, "If you were a redhead, I would think that the three of you are manifesting my dream from last night." She replies, "Oh, I'm a natural redhead. I colored my hair just last week for fun. I think I'll go back to red."

April 16, 2010, evening - A cheerful crowd gather for my Synchronicity playshop at Jubilee, a lively community church downtown. I drum for the group, asking them to relax into the rhythm and pull up a dream or memory we can use in a game. My mind turns again to the three redheads of my dream, the many forms of the Triple Goddess and the Three Fates, and the distinctly Celtic quality of all this. Through my stir of images comes the keening of bagpipes. A piper is playing at John of the Wood, the Celtic pub behind Jubilee. The sound of the pipes, skirling over the drumming, is irresistible. When the time comes for us to write on index cards a summary of a dream or memory that came during the drumming, I write: "My ancestors are calling me, reaching through my stir of memories. They want me to honor and celebrate and embody their knowing."

April 17, 2010 - I wake from a dream in which Lady Charlotte Guest, one of the first to translate and make accessible Celtic literature including he Mabinogion, invites me to stay with her at a country house . We discuss how events and opportunities recur in a life or in a day, and how when something recurs three times, we are prompted to pay attention.

Later that spring, in a powerful dream of love and longing, I was presented with a choice of three paths in the greenwoods.