My daily practice is not only to write down whatever dream memories I bring from the night, but to draw them. My journal drawings are rough and ready and as I make them my inner art critic is sent to another room. As I continue the practice, I find that successive drawings make storyboards for narratives unfolding over many nights, in more than one world. Some of the drawings make me vividly aware of just how far and wide the Traveler - the part of me that goes wandering while my physical body is dormant - may go in his overnight rambles. Some of the drawings make it clear that some dream experiences are like quantum chess games in which pieces are moving simultaneously in parallel, potentially interactive states. 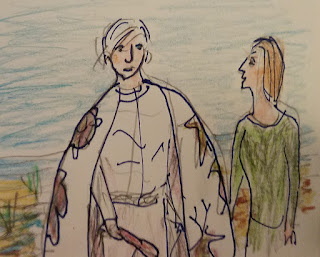 I am leading a workshop for a large group near a rocky shore. I am carrying many shamanic accoutrements and power objects but I lay them all down in favor of a long-handled rattle and a blanket I drape over my shoulders. The blanket looks like a Pendleton with many animal designs. However I tell the group it is a Bear blanket. Bear has made it clear who will be in charge of our healing journeys. There is happy excitement as I lay out the stages of a full day of working with the medicine of the animal spirits under the aegis of the Bear. 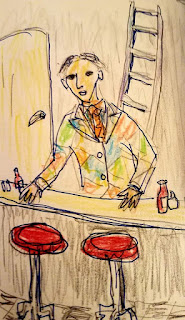 "You'll have to talk to Ramón," says the strange young man in a parti-colored suit. He comes down a ladder to speak with me after I return to the retro diner in search of a carry on bag I think I left there. He makes a gnomic remark about "the first parrot in the race." Where is Ramón? "Ramón will be here in three hours. He speaks Spanish, Belgian and Hebrew." 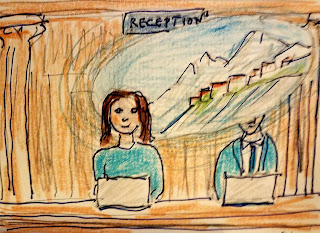 The young woman at hotel reception tells me she has been reading or viewing something called "Niss". "Eliot Niss," I say brightly, not realizing that his last name was Ness. The receptionist ignores this and goes into an enraptured trance. Her fingers are frozen on the computer keyboard. She is no longer pulling up my reservation though i am in a hurry. She is THERE, in the world of Niss. I catch a glimpse of what is going on inside the bubble of her fantasy - a kind of Shangri-la within icy mountain ramparts. I reach over the counter and gently touch her shoulder, trying to bring her back.

I leave this dream scene wanting to know: Who or What Is Niss? Auntie Google gives me acronyms that don't feel relevant and Nissan ads; Urban Dictionary gives me wildly discordant slang references. Calling Special Agent Ness; we need a dream detective to work on this mystery word. 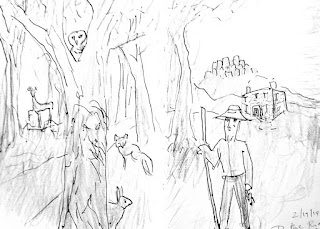 The lattice doors of my salon open and I am on a green path of pressed grass winding deep into the woods. I am following deer, running like a stag and feel the antlers on my head. I delight in all the animal life. Fox wants to show me something but I stay on the green path. Beyond the woods I look up at a shining city. I feel my elders and old comrades are there. However I pause to talk to a graybeard leaning on a staff near a slightly tumbledown stone house. I ask him, "What is this place?". He replies, "The riding of the soul."

- from a lucid dream that unfolded spontaneously in the hypnagogic state overnight.

Feelings: excited and regenerated by that depth of green. Intrigued by the unexpected phrase. The term "riding" in British Commonwealth usage, means an administrative district and is derived from a Norse word meaning a third. 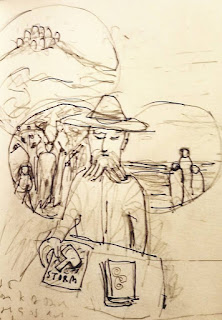 In the liminal space between awake and sleep I follow the path I took the previous night to the Riding of Soul. The old man in the broad brimmed hat is waiting for me. His name is Oberon. Really? I try to change this; surely I can't be dealing with the King of the Fairies. The struggle of my inner skeptic is met with cool indifference. "I have told you my name. Use it or not."

He shows me that I have a choice between three paths. I see vivid scenes of where they lead. All outcomes have strong attractions. In the long run, it becomes clear to me, I can follow all three paths and manifest what each offers. However for manifestation in the near future it is necessary to set a clear and simple objective and hold to that.

Oberon takes out what looks like a set of tarot cards. Really? My skeptic is restive again. Oberon wants me to see that, whatever my life choices, there is a ruling factor that I must acknowledge. I can work with this archetype in many ways but I can't evade its presence. I reconcile myself to the delivery of one of the major arcana. Here it comes. Wait. This is not a card from any tarot deck I have seen or imagined.

The image is of a thunderhead or thunderbird shooting lightning bolts. Thor's hammer flies through the maelstrom. The name on the card is Storm. A detailed reading follows, exploring how my life will unfold according to which aspect of myself I allow to take the lead when the power of Storm is strong with me, in me and around me.

Feelings: Excited, potent
Reality: Since boyhood I have always felt close to lightning and thunder and the mythic beings associated with those elemental powers. 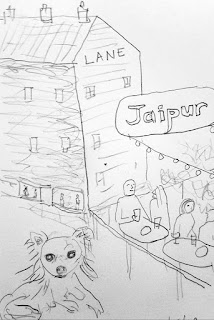 Once again, I am tracking the Traveler - the Robert who wanders far and wide while my body is dormant in the bed. I roused myself to write a list of names and clues from his rambles overnight:- a long-haired white chihuahua cuddling close to me in a crowded taxi
- a landscape of gently rolling hills where landmarks had been given Celtic names. I observed that the Celtic words were imports the original spirits of the land may not appreciate.
- a thrift edition of a novel "by the author of Ben-Hur". I put this with other thrift classics and children's books in a pile of Free Books on a curb, making the sign.
- an Indian restaurant with a pleasant beer garden.The sign read "Jaipur" and this was also the name of the house beer
- a clothing store named Lane in a high Victorian building that looked like a former factory. A woman told me I would not be interested because they sold "Boys' Academy stuff". 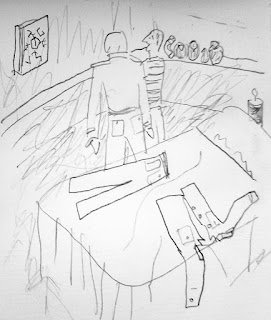 While we seek to make linear narratives out of our dreams it is possible that many of them are organized by superposition. In quantum mechanics this means that "whenever the system is definitely in one state we can consider it as being partly in each of two or more states" (Paul Dirac). This may explain how in the dream I just left I was both (a) dressed in safari shirt and cream chinos and (b) looking for the same clothes on a bed while (a) I had the room to myself but (b) there were other people coming and going, leaving signs of much activity - a burning candle, a weird collection of Icelandic elves and trolls, both humorous and sorcerous, on a wide windowsill. The parallel states converged when a young man - one of a gay couple that had been using the room without intruding on me - showed me a strange cabinet carved with runes and magic sigils. Definitely some magic afoot.

Hi Robert, I have read your book Mysterious Realities. It was a fun and inspiring book to read. Some stories I already knew from your blog, but it was nice to read them again. Thank you for sharing your dreams.

I'm not feeling like a Special Dream Agent ;) but I noticed you didn't mention Wikipedia as research tool. When I used Niss in wikipedia it showed, among other things, the name:Thorvald Simeon Niss. A Danish landscape painter (7 May 1842 – 11 May 1905)
If it were my dream I would wonder if the image shown from her fantasy corresponds to a painting by Niss. (After this I searched the internet for a similar painting, but didn't find it. But who knows)

That's an interesting lead James, thank you. Another dream detective made a connection between Niss and the Scots Gaelic name for Inverness, Inbhir Nis.

Wikipedia is great. "Niss" reminded me of my deceased grandmother's references to what sounded to me like "nishna," a Scandinavian folk spirit, which is spelled "nisse" and pronounced [ˈnesə]. They are linked to pre-Christian ancestor worship.