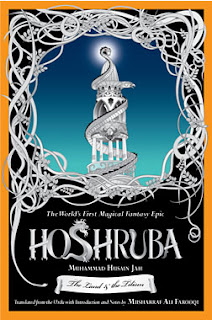 I am pursuing my research into Eastern realms of enchantment. This has taken me into the immense fantasy realm of a storytelling tradition that begins in Persia and flowers into its lushest growth in the Urdu language in northern India and Pakistan. The best of this material is only recently becoming available in English translation, thanks in part to a dream.

The translator, Urdu scholar and novelist Musharraf Ali Farooqi (who grew up on this stuff on hot afternoons in Hyderabad) dreamed he was visited by mythic creatures who came galloping right out of The Adventures of Amir Hamza, the name given to the main story cycle. In giving us the first accessible English translation of The Adventures of Amir Hamza (published by the Modern Library in a 900-page edition) Farooqi has made an enormous contribution to the common fund of world literature.

Turning these wonder tales into English was long thought to be an impossible task. They are the transitions of oral narratives, and you hear the voices of the many tellers, ranging from courtly Persian to bawdy, street vendors’ Hindustani. You get detail piled on detail. It won’t do to have an army ride into a city without naming a hundred kinds of weapons. In one passage we even get the itemization of seventy kinds of rice pilaf. The Urdu-language editors were quite unable to harmonize the variant plots of the numberless dastangos (storytellers) who contributed to these adventures. Yet Musharraf Farooqi has performed a marvel, serving a feast of delights as rich as the Arabian Nights and often absolutely fresh to the Western reader.

A Persian emperor sees his crown carried away by a crow that is killed by a hawk that restores it. The dream is interpreted by his vizier to foreshadow the coming of a hero, Amir Hamza, who will be born in Mecca. The vizier is despatched to Mecca to wait for the coming child (whose name is known to history as that of the martial uncle of the Prophet Muhammad). In the realm of fairies and jinn - the empire of Qaf - another royal dream of annunciation predicts the coming of the same Amir Hamza as the human champion who will overthrow a monstrous usurper.

What unfolds is a magnificent saga of danger, trickery and romance, in which raucous interludes of low comedy interweave with moments of mystical encounter. Every prince is accompanied by a "trickster" (ayyar) who uses disguise and deception and magical props in the neverending battles with sorcerers and demons. The trickster who accompanies the protagonist, Amar Ayyar, gains his bag of tricks through a dream on a holy mountain in which he meets the "prophets". He is given a zambil, a bag that is bigger inside than outside - so big it can contain a whole world.

In The Adventures of Amir Hamza we travel through a wondrous imaginal geography that includes contructed realities known as tilisms. These are realms of enchantment created by sorcerers. You may fall into one for various reasons and then find it very hard to get out.

Any world may prove to be a tilism, a realm of enchantment created by sorcerers in defiance of “the laws of God and of nature”. We learn a great deal more about the conditions of such realms in a giant offshoot of The Adventures of Amir Hamza, the immense fantasy epic known as the Tilism-e Hoshruba. The tilism of Hoshruba is the realm of Afrasiyab, the Emperor of Enchantment. Its geography is more various and complex than that of the ordinary world. There are tilisms within tilisms, nested worlds created by magic and imagination. Humans live in such places but do not see where they are. It is much easier to fall into a tilism than to get out.

The only way to pierce the veils of illusion and overthrow a tilism is to find the tablet that holds the secrets of the tilism, including the conditions for its destruction and the name of the person who will destroy it. The tablet could be concealed anywhere, often inside the tilism itself.

Musharraf Farooqi has just published the first volume of a projected 24-volume translation of Hoshruba: The Land and the Tilism (Urdu Project, 2009) - a heroic enterprise that draws my admiration, and expands our knowledge of the mythic imagination.

Last year I found myself in a conversation with Kathleen Gill, a "storyteller," more importantly a hiker who writes stories about the spaces that speak to her on her walking journeys. She has hiked the entire Appalachian trail twice and has climbed the full complement of the Adirondack mountain high peaks more than once. She always has her backpack and survival gear nearby in case a trail or a mountain presents itself and calls to her.

Our conversation led to experiences that have unnerved her and she said that good hikers understand and step back from what she called "dead zones."

I remembered Kathleen's description of dead zones when I read your evocative description of tilism and your noting that any world can become a tilism. Kathleen spoke of the need to be in touch with the spaces in nature in order to recognize the dangerous areas and a hiker's need to have all the senses engaged. The dead zones, by her definition, are areas you approach where you feel a sudden "push back" and a lack of air. Everything is quiet there - no birds call, no animal sounds, and the air seems to have a palpable resistance to movement around the space. You feel that you will be harmed if you enter these spaces, and Kathleen said, as in your description of tilism, that you feel if you push through or tumble past the area of resistance you cross a boundary where it is more difficult to exit than to enter. There are animate and inanimate forces there - she says - invisible, with a desire to trick, deceive, and do harm.

What a deliciously eerie description of a certain kind of "badland". I've run into such places, most memorably in places where the topsoil is thin or missing and a desert or stony landscape seems unable to absorb strange roving energies, of the dead and other things.

I think this phenomenon is different from the tilism, which is a construction, but I would think that those who devise and feast on tales like the Hoshruba would be quite familiar - in different settings - with regions like these "dead zones" where jinn and others are naturally at home.

Trying to remember the specific features of the man sized ant hills in a stetch of forest in the Queensland rainforest; Using them as my guide rather like Ariadne's thread, I found myself completly lost. The forest was silent, I felt as if energy seemed to magnify and distort as the panic button raised the alarm that sent my heart beat into panic mode.
The friends dog that I had been walking had left me. I felt the energy of the snake. A choice of direction had to be made, my mind had no focus. I stepped over a fallen tree and heard a hissing noise. I narrowly missed treading on a death adder, had i not heard its warning my foot would have landed directly upon it.
I ran to a safe distance and whistled for the dog to save me, her name was Sweetie Pie.
She ran to my rescue and led me back home.
nicola