A Medical Scientist Dreams with a God 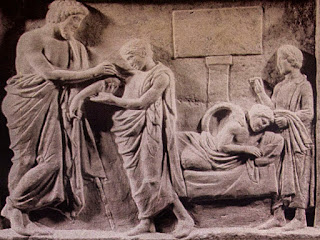 Galen (128-210) was one of the greatest scientists of his time, and a pioneer of scientific methods of experiment. He was a prolific author in many fields, ranging from psychiatry to linguistics, from pathology to mathematics. He was court physician to Marcus Aurelius, able to influence the most powerful men in the . He doctored gladiators and enjoyed their company.
He wielded his sharp mind like a scalpel and a digging tool, and was in many ways the model of Greek rationalism. Second only to Hippocrates, Galen is the most important person in the rise of Western medicine.
He owed his career and, by his own account, his life, to dreams of a god. He was born in , a highly civilized Greek city renowned for its library of 200,000 parchment books and its Asklepeion, a huge temple complex devoted to the healing religion of Asklepios. Galen’s father Nikon was one of the top architects in the city, and initially opposed his son’s desire to study medicine until his mind was changed by “vivid dreams” of the god. When he was twenty, Galen wrote, “Asklepios, god of my fathers, saved me when I had the deadly condition of an abscess.” The god directed him to perform a surgical procedure, opening an artery in his hand between his thumb and forefinger.
He wrote some of his medical books under direction from Asklepios. When he was at the height of his career, the god cautioned him not to go on an eastern campaign with Marcus Aurelius. He may have won the emperor’s indulgence because Marcus Aurelius thanked the gods for granting him “assistance in dreams” and especially for showing him “how to avoid spitting blood and fits of giddiness.” Later in Galen’s writing career, Asklepios reproached him in a dream because he had not completed a treatise on the optic nerve; he then pushed himself to finish this work.
As he recorded medical case histories, Galen paid close attention to the appearances of the god in diagnosing and prescribing for different ailments, and in facilitating direct healing. He was in no way superstitious. It would have been irrational, from his perspective, not to work with a friendly god who could fix the parts other medicine could not reach – and demonstrated this again and again.
The surviving text of Galen’s essay On Diagnosis from Dreams shows his no-nonsense approach. He explains that dreams can provide accurate diagnosis because during sleep the soul travels inside the body and checks out what is going on. He notes the need to distinguish a somatic dream of this kind – for which he uses the word enhypnion – from other types, such as those that originate in waking thoughts and actions, or the prophetic dream (oneiros). He is especially interested in dream weather, believing that an excess of moisture or dryness, of heat or cold in a dream, will indicate the action that needs to be taken to balance a patient’s “humors”, or vital energies.
He notes a cautionary example of how a dream warning was missed when a patient’s dream that one of his legs was turned to stone was interpreted symbolically instead of more literally. “This dream was interpreted by many skilled in these matters as a reference to the man’s slaves. However, contrary to all of our expectations, the dreamer became paralyzed in that leg.”
Galen prided himself on his ability to use his observation and intuition to diagnose emotional, as well as physical, problems. Called to treat a woman who was suffering from insomnia, he noticed that her pulse became wildly disturbed when the name of a handsome dancer, Pylades, was mentioned, but remained unaffected when he mentioned the name of a rival dancer. Galen diagnosed love-sickness.
And then there are the dreams where the god appears, to prescribe and to cure. Sometimes he does this by issuing prescriptions that might puzzle even the most adventurous physician. In one case reported by Galen, a “foreigner” came to the temple at Pergamon, in response to a dream, and had a visionary encounter with Askeplios in which he was directed to drink “a drug made from vipers”, and then smear the potion on his skin. This produced an ugly skin condition, which disappeared as the patient was healed. One scholar suggests that “viper” – echidne – should be read as “wild fig”, echinos, which certainly sounds less scary, but hardly less strange. [1] And we must never forget the vital importance of the “health-bringing snakes” in the Asklepian religion.
One of the benefits of divine dreams, according to Galen, is that patients are more willing to comply with directions from a god than from a regular doctor. “In Pergamon we see that those who are being treated by the god obey him when on many occasions he bids them not to drink at all for fifteen days, while they obey none of the physicians who give this prescription.” [2]
The god may also offer an Rx that addresses the whole person, rather than merely the symptom. Galen believed that this approach was at the heart of healing. In one of the most striking fragments from his works (many of which perished in a fire in the – of all places – in ) he states, “We have made not a few men healthy by correcting the disproportion of their emotions.” Asklepios now appears as a power that restores balance in a life. He ordered some “to compose comic mimes and certain songs”, others to take up vigorous exercise including hunting, horse riding and martial arts to “arouse passion when it was weak” and to restore “measure” in the patient. [3]

We don’t want to miss the place of healing in Galen’s city of , also well-known to his contemporary Aelius Aristides. The Asklepeion was on the south-western edge of the city, approached through a long colonnade. Those seeking health of body and mind entered a courtyard whose central feature was a white marble pillar adorned with the snakes of Asklepios. Beyond it, they moved through an arch into the sacred precinct. There was the round – the Finisher – an enigmatic figure sometimes described as the son of Asklepios, but depicted as a hooded dwarf whose name and whose image carried the sense of nearness to death, the Finisher of human affairs. In the subterranean level of this temple, patients were immersed in purifying baths and rites of dream incubation took place.A passage led to the sacred well, and what went on here may give us a clue to the mystery of .
Aristides tells us that “this well is the discovery of the great magician who does everything for the safety of mankind.” For many it “is like a drug.” By bathing in it, the blind recover their sight; by drinking from it many are cured of chest trouble and regain “the breath of life.” The lame get up and walk. Some who drink from the well become prophetic. “For some merely drawing up the water has been like a means of safety.” [4]
No surprise, then, that Galen not only reports dreams as clinical data, but includes an invocation to Askelpios when he administers medical treatment, as he did with these words for an emperor: “Be gracious, blessed Healer, you who made this remedy; be gracious and send your always gracious daughter Panacea to the Emperor, who will offer pure sacrifices for the freedom from pain which you can grant.”

Image: The Healing of Archinus, ex-voto tablet, c. 370 BCE in the National Archaeological Museum, Athens. The tablet commemorates an act of dream healing in the shrine of Amphiaraos in the city of Oropos,on the border of Boeotia and Attica. The deified king of Argos, Amphiaraos, was credited with powers of healing and his cult, like that of Asklepios, featured dream incubation. On the right side of the tablet, the patient is asleep or dormant on a couch. In the left foreground, Amphiaraos, like a mortal physician, is treating the patient’s right shoulder. At the same time, a sacred snake is licking or biting the same right shoulder of the sleeping patient. Behind, on a pillar, a votive stele commemorates the god’s act of healing. The figure on the right may be a third representation of the patient Archinus,giving thanks for his healing.

Robert, I am sitting here in awe right now because I experienced a synchronicity with this post and it gives me such a feeling of joy. I only read this post for the first time today but on Tuesday morning I had a dream that I was in a classroom at a school. I walked into the room and felt I had something hard stuck in my mouth which prevented me from speaking so I promptly removed it. Taking the hard thing from my mouth was such a relief. Then I was going to fill an plug-in aromatherapy diffuser with crystals to purify and cleanse the air but right before I was to do so, a young girl in the classroom asked me what the ingredients are in the bag of crystals. She wanted to know because she was concerned that the aroma might irritate her. I brought the bag over to her and looked at the ingredients. There were 3 ingredients but I only recalled one----Bethseda. I read it to the young girl. When I awoke this word was at the forefront of my mind and it felt like a homework assignment which I really enjoy. I Googled "Bethseda" and learned about the Pool of Bethesda that is mentioned in the Bible where Jesus had healed a paralyzed man. At first, I felt I had seen a misspelling of the word in my dream but one website said there are multiple spellings of the word. I find it so interesting that I dreamed of "Bethseda" and not "Bethesda" and that I experienced this synchronicity with your dream post. I get the sense my homework assignment is not yet complete and I am excited to dive more deeply into this.

Reality check: I work as a custodian so classrooms are a usual sight for me. I would also like to mention that a co-worker, who I have learned is a devout Mormon, whom I regularly talk to about interpretations of Bible verses had appeared in my dream so this inspired me to share this dream with him. Although he did not recall much about this passage involving the Pool of Bethesda, he said that he would look into it and get back to me to share his thoughts. It was cool to see that he genuinely sounded excited to look more closely at the passage. He even shared interpretations of my dream with me which was very unexpected but welcomed. This is the first time I have shared a dream at work and I will admit that I was nervous to do so but I felt it was part of the homework assignment from my dream so I felt inspired to share. I am so glad that I did because it was like a doorway opened.

Thank you for sharing this powerful experience and for following your dreams. You may want to read the first section of chapter 4 of my book The Secret History of Dreaming. It is all about what actually happened at the pool of Bethesda, a story much older than the New Testament.