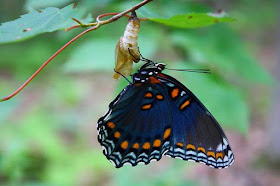 In many cultures, the butterfly is a favorite image for soul. In Greek, the word psyche means both “soul” and “butterfly”. The cycle of the butterfly is a model for a life that is open to transformation. I know this to be true in an individual life. Let us hope that it is true for our kind on a collective level in these dark and crazy times.
To spread butterfly wings, you must transform again and again. You must let your old identity collapse into mush. You must use your imaginal cells to overcome the resistance of the old you, the little you, who clings to what you once were. You will progress through four distinct life forms. Each time you change, those who knew your previous self may no longer be able to recognize you, because you will be radically, almost inconceivably different.
The butterfly cycle begins with an egg, stuck on a leaf. Out from the egg comes a very hungry caterpillar that tries to eat all the green available. Eventually the caterpillar stops consuming and settles on the underside of another leaf, or perhaps in the bark of a tree. It grows a hard casing, the chrysalis. Inside the chrysalis, it turns into a restless mush, a stew of contending elements.
In the chrysalis, as in an alchemical retort, the worm produces new cells. Science calls these imaginal cells. They are quite different from anything that has been active in the caterpillar before, so different that the killer cells in the worm's immune system target them as enemies that must be destroyed. The job of the killer cells is to resist transformation and defend the old identity of this life form as a caterpillar hungry for green
Enough imaginal cells escape the murderous attack  to create friendly communities. They resonate with each other. They have a social network, reaching each other on the same frequency band. They gather together, and soon the imaginal movement is so strong the riot police and death squads of the immune system are overwhelmed. The revolution produces a life form that could not be imagined without the magic of the active imaginal community. It is the butterfly, ready to burst from the chrysalis on bright wings and sparkle in the light.
I love the biologists' choice of name for the cells of transformation: imaginal. It evokes the Imaginal Realm, the realm of true imagination known to poets, mystics and shamans.
The struggle inside the chrysalis between the defenders of the worm state and the agents of winged possibility is one that many of us surely experience in times of spiritual emergence. We may find ourselves pounded into mush, hanging upside down from whatever we can cling to - and yet have the possibility and destiny of becoming much, much more.
You can't stay a worm, if you want to become a butterfly. You are obliged to drop  old attachments and expectations and let your old identity be broken down in the mush as a new identity emerges. And you must allow time for the new form to grow, and be fully prepared to take wing. Don’t rush the butterfly.
There is a wonderful cautionary story about this in the autobiography of Nikos Kazantzakis, the celebrated author of Zorba the Greek. He found a cocoon in the bark of an olive tree. He saw that the butterfly was beginning to emerge. He watched for a time, then became impatient. He blew on the cocoon, intending to speed up the process of emergence with the warmth of his breath. To his delight, the butterfly emerged from the cocoon. But it had been brought out prematurely. Its wings were crumpled and unusable. They had needed the heat of the sun, not merely the hot air of a man with hurry sickness. The butterfly died in Kazantzakis’ hand. Towards the end of his life, he wrote, “That little body is the greatest weight I have on my conscience.”
Don’t rush the butterfly, and don’t pronounce it dead prematurely. I learned about that when I started teaching at the Esalen Institute near Big Sur in California. On a chill November morning, on the path from the Big House to the ravine, I stopped with a foot in mid-air because I noticed  just in time that what I had taken for a fallen leaf was a Monarch butterfly, lying dormant with folded wings. As the sun’s rays streamed down, warming its body and drying its wings, the Monarch stirred and flew off, towards the gardens..

Let those of us who can dream and imagine become active imaginal cells in our society. Let's help to relegate the very hungry caterpillars to past history. Let's help each other survive the stew of confusion in which old fears and old habits try to abort transformation. Let's encourage each other to allow each locked-down environment to become the chrysalis in which something brighter and lovelier takes form. Let's support what is new and vital, and help our kind emerge from our time of confinement shining, spreading wings of fresh creativity and compassion and soul.

Text adapted from "The Change in the Very Hungry Caterpillar"in  The Boy Who Died and Came Back: Adventures of a Dream Archaeologist in the Multiverse by Robert Moss. Published by New World Library.