It ain't over till you cut the cords 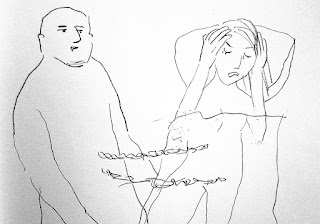 We are linked to those with whom we have shared significant life experiences by cords of psychic and emotional attachment. The Hawaiian kahunas maintain that an aka cord of "sticky" etheric substance runs between us and everyone who has ever touched our lives unless it is detached.
When our relations with the people close to us are strong and healthy, there is no problem in being joined to them in this way. On the contrary, we want to be connected to those we love, those with whom we are engaged in a common purpose, and our family of chosen life companions. We still need to notice that, linked in this way, we can very easily pick up other people's stuff. Dreams teach us about how this works. We can find ourselves, in dreams, in another person's situation, or receiving their imagery or their visitations across the psychic bridges that are open between us.
The problem with the psychic cords arises when a relationship has gone sour, or become unbalanced, so that energy is moving only one way, draining one of those involved. A very common issue is that when we break up with a spouse or partner or close friend, the psychic cords between us remain intact. What flows along them now is no longer healthy emotional energy but bad feelings and rancor that can bring both members of the old relationship down. More seriously, the surviving psychic bridge can become a means by which a jealous or bitter ex comes calling, confusing night dreams and wakeful perception and energy.
To maintain psychic good health, we want to learn to scan our energy fields and locate the psychic cords of attachment between ourselves and others.I recently had members of a training do this by the method explained in my book Active Dreaming in the chapter on "a low maintenance plan for psychic well-being". Our special interest was to determine the appropriate ways to "unplug" unwanted or unhealthy cords of attachment. Simply picturing yourself hacking away at a cord might not be the best way!
For many in the group, color was a guide to the condition of psychic cords. Toxic attachments appeared black; old, energy-draining attachments appeared grey, sometimes the grey of used chewing gum. Some fresh and improvisational approaches to releasing or cleansing psychic links emerged.
One woman pictured herself swimming in healing waters while little fish nibbled away gently at the psychic cords that needed to be released. A man found that an ally (a "Chinese doctor") entered the scene; he tiled "little bows" in the problematic cords, leaving them to wither and drop away gradually. For another member of the group, the ally appeared as a crow that pecked away at the root of a black cord of connection to a deceased friend, until all the stagnant dead energy drained away.
Some found it possible to cleanse and restore proper flow in the cords of attachment involved in current relationships. A woman found that the psychic cord between her and her boyfriend was a very mixed picture; it was mottled grey, black and red. She did not like the deadness of the black and the drabness of the grey. She pictured herself drawing the energy of a waterfall to which she had recently hiked to cleanse and refresh the connection. She continued with this powerful and spontaneous mediation until the cord glowed red and gold, the black and grey gone.