When the bull was my healer 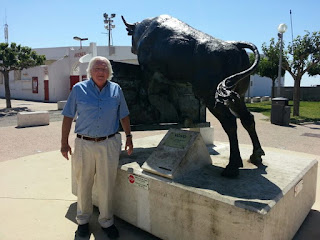 It's a glorious sunny day in Provence. I am driving with a friend across the flatlands and rice fields of the Camargue. The lunar horns of the black bulls rise from the high grass. We are going to Saintes Maries de la Mer. The plural forms are not a typo. This seaside town in the  Département du Gard is named for two Maries who are counted among the first apostles of Christ: his aunt and the mother of James and John (called Salome). According to legend they made their escape to Provence by boat around the year 46. The walls of their church include extraordinary votive paintings showing how their intercession saved people from fatal accidents and storms at sea and life-threatening illnesses. In some of the paintings, they float in midair, above the sleeping forms of dreamers.
I pause for tapas at a cafe near the beach, in front of a magnificent statue of the black bull of the Camargue. My friend captures us together. As I munch tapinade on crostini, and slices of saucisson de taureau, I recall a time when the bull was a central figure in self-healing.
I am returning to Barcelona, where this episode unfolded, next weekend, to lead a workshop on Active Dreaming. Between now and then, I am leading a training in imaginal healing in southern France. After these adventures, I will launch a new online course on the practice of imagination for The Shift Network.
So I inspired to re-pots my horns-and-all narrative of how the bull became my healer in a crisis of illness in Barcelona nearly two years ago. This provides a very personal answer to the question: how can we use images in healing?


There are occasional penalties for living and traveling as I do. Sunday before last, I flew back from Hawaii to the frozen Northeast, a journey of almost 20 hours including a redeye overnight flight. I enjoyed three days at home, in temperatures nearly 70 degrees F below where I had come from, then caught another series of planes, including another redeye, to Frankfurt, arriving for breakfast last Friday. The temperature here was only 60 degrees F lower than in Hawaii. No problem, then, in walking around the part of the city where I was staying for three hours in a light coat, under slightly heavier snow.
As we entered the weekend, I noticed I had major symptoms of oncoming cold or flu. I tried to drive these away by eating like a bear at breakfast and dinner, and did not let my condition interfere with the workshop, where we had a royally good time. But, with my nasal passages largely blocked, I found it hard to get more than two hours sleep at night. No problem, I told myself. I had already planned to spend a few days in Barcelona between Frankfurt and my next depth workshop in Utrecht next weekend, exploring Gaudi territory and hopefully enjoying a little sun and sea.
Fast-forward to 3:30 a.m. today. I am hunched over the sink in the bathroom, my chest screaming with pain when I cough, and a slosh of stuff I don't want to look at heaving from me to the drain. I don't get colds or flu, I have told myself for years. But this is moving very fast, towards bronchitis and possibly pneumonia. I recall, without cheer, how fast that happened when I was a boy, and suffered life-threatening bouts of double pneumonia twelve times over eight years, between the ages of three and eleven. I thought I had put all that behind me, and found a way to show up in this body on a reliable basis, at least on most days.
I'll need to find a doctor, I realize. Or at least see if a local pharmacy would sell me some powerful antibiotics without the formality of a prescription. Back to bed, my chest aching. At least, with this sudden and serious descent of my condition down through the respiratory system, I could breathe a little through the nose.
I lie on my back, finding some slight comfort in the surprising quiet of this part of Eixample  (the Gaudi-era section of Barcelona outside the Old City), hoping for at least a little rest. I continue to be gripped by a sense that my condition is serious, and could get very much worse. Okay, I tell myself. Try your own stuff. Start by asking for help, and ask the right way.
It took me some thinking before I got the words of my petition right. Speaking to the Universal Healer, I said, "I ask for the health my body requires to serve the purposes of the soul." Wait, let's be more specific. "I ask for the health my body requires to serve my purposes as teacher, creator, writer, healer and father." From somewhere in the depths, I sensed approval.
Then a power rushed into me, entering me from behind, around the kidneys. Its wild rush and its potency reminded me of the bull, and I recalled my encounter, walking the city on Tuesday morning, with the thinking bull of the Rambla de Catalunya. I felt this huge, bull-like energy spreading all through me and expanding my energy field and my sense of my physical size and strength.
I now felt another stream of energy, rising like a great serpent from the Earth, up through the soles of my feet, and through all of my energy centers.. And  yet another stream, a tremendous flood of light washing  down through my crown to join the others in dynamic, confluent movement.


Now a strong vision rose spontaneously, showing me how my body had been invaded and how its defenders were now moving with decision to trap them and destroy the invaders. The scene resembled the barbican of a medieval castle. The barbican was the space between an outer and an inner gate, in front of the main castle walls. It was designed as a death trap for attackers who managed to break through the outer gate. Once invaders got inside the barbican, the defenders could seal the outer gate, leaving the inner gate closed, and then massacre the intruding force by firing arrows into it through slits in the inner walls and sometimes in a roof structure overhead. Hurling down stones and pouring boiling oil over the invaders were also popular defense stratagems.
I watched with delight as the defenders of my immune system dealt with my body's invaders.Now I could see the brilliance of allowing them through the outer gate, into the death trap. I watched the mass execution of the germs directed by a lord wearing the silver antlers of a stag on his helm. As the attack faltered and the grisly germ-warriors died, I saw a giant of my cause, wearing the horns of a bull, wading among my body's enemies, finishing them off with his great ax.
I leaped from the bed, absolutely certain that my battle had been won. I went to the bathroom and coughed. No pain. The phlegm that came out was now brown, not green or yellow. I was expelling the corpses of the illness army. I felt vastly restored.
When I returned to bed and scanned my condition, I was delighted to see that the defense forces were now scouring out the space of the barbican. Finally the bull-knight summoned women in long white dresses to finish the cleaning, checking that no marks appeared on their fine white linen.
I am quite sure I am good to go. 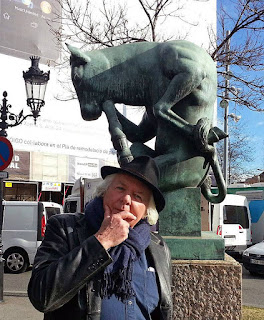 I readily concede that my methods of imaginal self-healing may not work for everyone. And there is really no need to send me lists of remedies and preventives for my future use. I have known since boyhood that my body believes the images I allow in, and I most certainly know that we all do better when we remember to ask for help in the right way.

My new course for The Shift Network is titled "Dreaming Wide Awake: Tapping into the World-Creating Power of Your Imagination". It starts on June 11 and runs for seven weeks. Recordings and transcripts are provided for all classes.
Posted by Robert Moss at 11:13 AM

A powerful screen play Robert Moss. Thank you for the unexpected, and perfectly timed medicine. I love Crazy Grace!

Yes that was a good story on how you can fight a disease.

Your story reminds me of a dream I had two weeks ago (in the night of 23-24 May) I think in this dream the loss of healingpower, power to recuperate, was central.
Dreamstory:
"on one of the tables in the place where I work stands a transparent box. In the box there are 4 miniature animals. A scorpion, a spider, a snake and a salamander. The scorpion threaten the other animals. At one point the scorpion bites the salamander in his left. I start pushing on the abdomen of the schorpion with a plastic lid, trying to make him stop biting. In my dream the scorpion is called ISIS (the terror group) And the salamander Damascus. "

it is not surprising that in my dream ISIS is depicted as a scorpion. That probably has to do with the fact that last year I read in the news they were bombing cities with cans that were filled with living scorpions.
And last year I saw an interview were they called Assad a salamander, because despite losing areas (ie limbs), he always seemed to recover.
A week before my dream the Syrian city of Palmyra was conquered by ISIS. I guess in my dreamworld the loss of the ciry Palmyra is probably considred as a mortal wound from which it is not possible to recover.

Perhaps important for those who do not know. Otherwise, the message of the story is lost. Salamanders can regenerate, grow back, parts of their body if they lose them. As their tail or their legs.

In the past few years I have had several strange dreams, where ISIS (the terrorist group) plays a role. In one of the last dreams was a strange-looking man who shouted; "If there are no excuses from you, you will all ride in the ISIS train" Just before I woke up.
It probably has something to do with the abnormal anger towards others which dominates in this group.